The Day After Pittsburgh and My Workshop Experience

The blog post title sounds like a disaster movie title. It is somewhat appropriate as I haven't even gone near my suitcases except to extract my toothbrush and a doll that was packed. My clothes may remain packed for a week. I'm not kidding. It  wasn't that long ago that I finished unpacking from the Nashville event in August.
This morning I've been busy doing sales transactions. I think I may have nipped a scam in the bud. There were two confusing transactions from China with multiple addresses and I couldn't figure out who was who. Last night I refunded one of the payments and today I refunded the other. I feel relieved.  I'm not going to name names but be careful if the name on the transaction doesn't match the Paypal name and address...especially if they don't tell you up front so you have time to check. That's a big red flag!
Right now I'm uploading two videos I shot during the dance party on Friday night. You will love them!
Quite by accident, one of the videos has the band performing Jump On It which is the same song I shot two years ago and which is up there to see.
I will of course post links when the uploads are complete.
Update on Video upload - it failed. The thing took more than three hours and then failed. UGH. If anyone knows how to upload a 5 minute recording (.mov) please let me know. I know how to use a camera but this file thing has me stumped.

I know you are all waiting for pictures and reviews. I am dying to get to that. What I've decided to do is to post all my pictures from the entire event at one link. Most of my pictures identify the people shown. If you see yourself or someone's picture and there is no identification, email me with the info. Try to identify the picture by number or grab it and send it to me with the info. I'm confused enough for all of us.

Picture link will be up later. Hang in there peeps.
----------
I signed up for 5 workshops: Rob's Poppy head hair styling, the Design-a-Doll workshop, Alain's fireplace workshop,  Steven Fraser's art workshop and Vaughn's out of the box workshop.
Rob was supremely well prepared with a print out and finished samples. He demonstrated carefully. Most of us watched as some worked along with him. There were enough supplies to create the hairstyle on the optional Poppy head which was sold for $25. to those signed up. The Poppy body to match was $25. in the store but $30 before class. Huh? There were loads of them in the store right up to the end of the convention. The heads, however, were only one to a customer. I can't believe the prices that the heads are fetching. It's like what happened with the Madra head from the Gene convention.

The Design A Doll room was arranged like a buffet. When you entered you picked up your nude dolls.  There were four available: one AA, one cocoa colored, two white. I chose the darker skinned dolls as I thought they were the prettiest.
Then you could choose two wigs for each doll. There was a good selection of wigs.
Arriving at the clothing selection area was a disappointment. There were a bunch of cheap-looking skirts that could be paired with cute blouses. There were two different colors of hoodies but no jeans to go with them. The clothes were very crappy as were the two optional clothing packs. I've seen much better at lower prices in Fashion Fever items. There were optional wig packs which were nice. I was told that other collectors weren't able to get them because they ran out. I bought one extra nude, rooted doll for $25. When I saw a doll that someone had put together earlier in the day, I couldn't believe the clothes she had gotten. I was very disappointed that the choices varied so much. It was definitely a WTF moment. I asked David Buttry about it later on and he explained that they had to hold back items for other collectors. What am I, chicken soup? What about those of us who had that segment of time? I would never sign up again to do this because it's not fair. David also told me that there were some clothes in the store I could buy. Really? The two crappy clothing packs and the cheap stuff is what was there. The good stuff was for other collectors apparently.
Matt Sutton was available to help put wigs on for us. He combed out the two Afro wigs I chose. That was a nice touch. 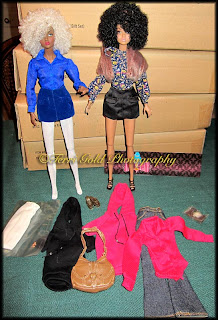 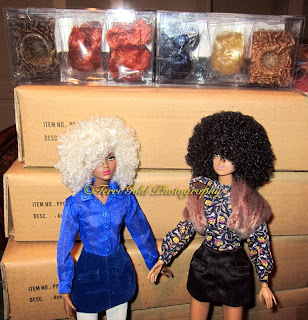 Here are the two dolls I put together in the stuff I could scrounge up. The shrug on one of the dolls is from an extra pack. The  jeans, handbag and brown shoes also were in that pack with the patterned blouse. They would have been cute in 60's dresses with those Afros.
I'm sure if David Buttry had his way, there would have been enough of the nice stuff for everyone. It's too bad that didn't happen.
Steven Fraser's class was very relaxing and laid back. He talked about how anything could be art. Some of us did little paintings or used colored pencils to draw. We were given a package of die cut paper frames that are often used in scrapbooking.
Alain Tremblay and Jakki Peters held a session in which Alain displayed a stained glass mantel and electrified fire screen that could be ordered for $80 plus shipping. Jakki talked about re-purposing plastic items and remodeling styrofoam for diorama purposes. We were given a set of sturdy templates for building our own mantels from foam board.
The most interesting session was the one with Vaughn. There was an optional doll to purchase which really had nothing at all to do with the session. Vaughn hinted that she was inspired by Lady Gaga. I didn't see it but many did. What do I know?
We got to ask him questions about everything from design to creation to shipping to naming and more.
He is a really a down-to-earth, open man who comes across very honest and sincere.
There's no dog-and-pony show there. He talked about going back and forth to the factory in China to train the workers - over and over again. He talked about how things are interpreted differently and may cause production problems. It was a great session and it made me see certain things in a different light.
Apparently Vaughn was aware of my dislike for unbalanced shoes. They're reading the blog.  That's a good thing for the most part, but I do catch hostility. An attitude change from some of the Integrity people was quite obvious to me.  Maybe I don't spend enough money buying Integrity products. Hmmmm.
Posted by Terri Gold at 11/01/2010 12:47:00 PM