Yesterday I decided to sell 7 of my Fashion Royalty dolls. I was getting overwhelmed by them and I picked out the ones I can live without. They are both original close up Veroniques, RBW Kyori, Glam Slam Kyori, Something Hot Kyori, GOTM Vero and Via Venetto Adele. I don't play with these dolls and it's time for them to move on. I really never thought I would sell a Kyori because I prided myself on having all the Kyoris except redhead Ginza. But it is ridiculous to keep dolls for that reason. As of a few hours ago Redhead Vero and Glam Slam are sold. GOTM is not very popular for some reason. She is a little plain. But she still has the beautiful Vero face. VV Adele is severe and exotic looking. She was my first Fashion Royalty doll ever! I had a good time with her but it's sayonara Via Venetto. 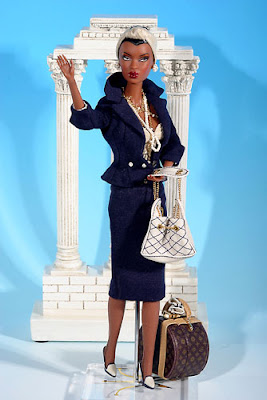 I'm considering purchasing an 8" BJD called Hana Angel by Rainman. She is an Elf Doll and very adorable. At $285 she is about $100 less than I would be paying retail if she were still available, which she is not. And the seller will be adding extra wigs, a tricycle and an extra outfit. It is a good deal. But what am I going to do with her? I hope she will be fun to pose and play with. That's all.
Posted by Terri Gold at 7/02/2008 11:19:00 AM No comments:

I've been playing alot with the doll arrangement in the showcases. Getting lots of taller bodies to replace the original articulated ones has really disordered the collection. I am still not satisfied with the appearance of the tall girls and the shorter ones. It's confusing.

It was fun playing with Ellery the other day. I love these pictures. 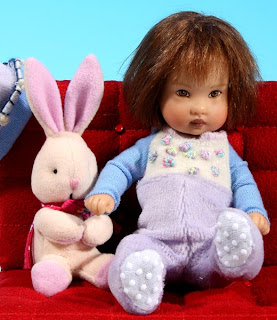 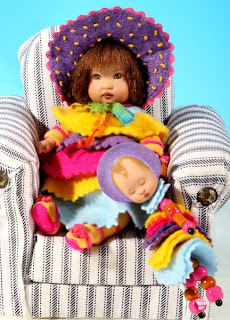 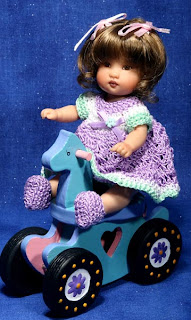 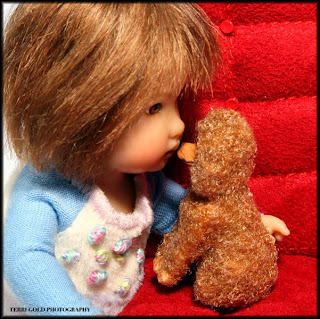 This ensemble is called Royal Material. It was designed by Kate Mitsubachi and is a Japanese exclusive carried only by BIC. It is unbelievably well made. The jacket is lined in white with pink polka dot fabric! The hat is black lace that is applied in concentric circles. Everything about this outfit says quality. Most of my own clothing isn't as well made. Only the best for our dolls. Right? 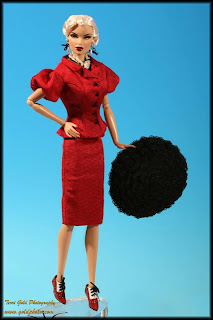 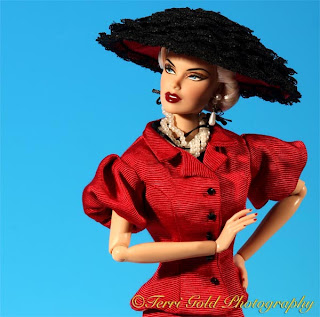 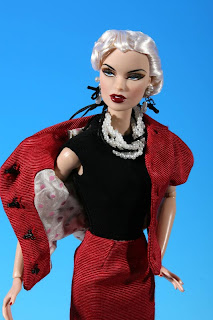 When I started collecting dolls seriously, I collected all ethnic varieties. As I went along and started thinning my growing collection I sold off most of my beautiful Adeles. 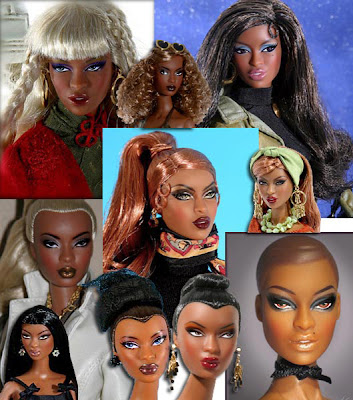 Is this amazing or what? Erica did the microbraids. It's hard to believe that this is the same doll called Traveler by Nature! She is my new favorite Veronique. 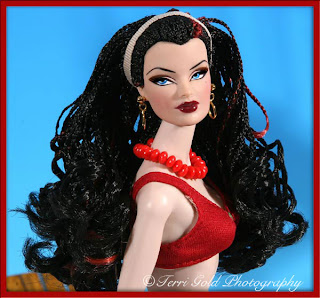 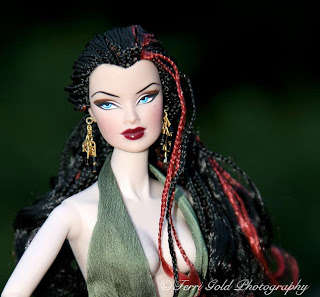 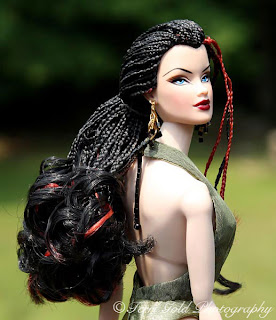 
Good dolly day today. I flocked two of the Pompadours that have been waiting for hair. I worked on their lips, too. And I used the modeling material to fill in one of bucky's smiles. (Monsieur Z doll) This will be a test subject. I worked on her eyes and enhanced them as well. Then I painted the lips. I don't have a picture yet. The hole in Erin's nose is now filled in as well. The collection needs lots of work but I'm afraid that I will ruin something so I will just stick to fixing up the less valuable dolls.
The boards have been a little slow this past week. Or perhaps I am looking for too much. Spending too much time at the computer has been a problem for a long time. The time I spent in my studio painting and crafting was very pleasant, indeed. No computer, no television. I do need magnifying eyeglasses. My regular glasses are not strong enough for fine work. 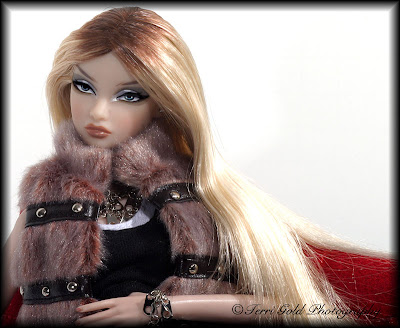 
I have had to redress and rearrange about 60% of my collection. I packed away several Silkstones which I don't want out any longer and I am selling some I didn't think I would sell. The new bodies have caused a rift in my collection. I cannot display them in the same case. I have 3 more tall bodies on the way and then I will stop switching. I have left the really special dolls untouched such as Cosmetic Takeover Natalia, Silver Society and Midnight in Monaco. 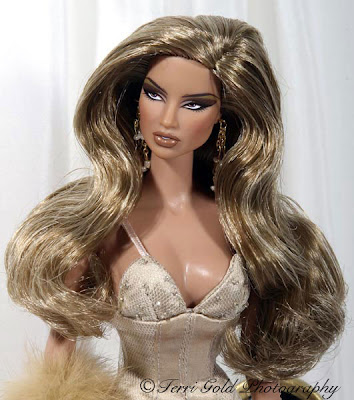 For several weeks it felt extremely disorganized and I didn't like the feeling. I like to find the perfect outfit for each doll (which changes occasionally) and set her up like that. This was a hodge podge because so many dolls came in so fast. Today I received two wigs from my dealer that I didn't want. Actually one was canceled and the other I never ordered. I'm going to keep them, however. This is not the first time she has sent me something I didn't want. The last time it was a doll but I sold it right away. I just hope my Miami order goes through properly.

The following is a personal message to Madame DeFarge: Thanks. Your actions reminded me that a web log is not a personal journal and that this is a very small world.
Posted by Terri Gold at 7/01/2008 11:53:00 PM No comments:


I have been wrapping and shipping all day long. Just one more package for the DD swap to go. I actually painted a trio of pieces for the diorama exchange! They look cool. The shipping for some of the things is pretty high. I will consider that the next time I choose swap items. I am way over the suggested gift amount by about 50%
The attached picture is of my second reroot. She was a Traveler By Nature Veronique. The hair needs styling, for sure.
Busy, busy, busy...with new dolls and clothes. I managed to trade or buy lots of taller bodies. I'm wondering if I can attach more than one picture to this entry. I think not.
Tags: | 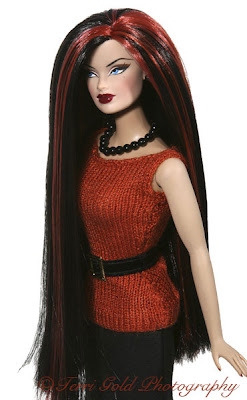 
Feeling overwhelmed by amount of dolls and confusion about the new bodies. Getting used to them and now the original dolls look too short. This is not good. I finished the new rerooting of Traveler by Nature Veronique. Not sure if I love it.
What else is new. Many new dolls are coming by the end of the year. Madison's doll will prove to be a spectacular success and very much in demand. The prices are going higher than $600 already and the retail is $180. I'm definitely looking forward to getting her but she may be the only doll I don't debox. 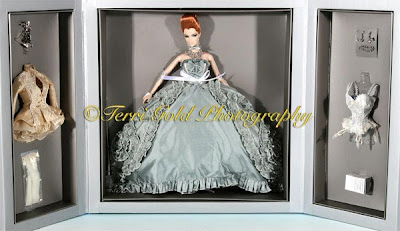 I'm trying to sell as much stuff as possible to raise funds to try to keep the in and out balanced. I'm in the red at this point but I can catch up if I keep working at selling. I will list on eBay to move more stuff out.
Posted by Terri Gold at 7/01/2008 11:45:00 PM No comments:


Last night I bought the two outfit sets from the convention. But a little while ago someone offered them to me for less than I paid. The retail is $49. I would still like to get the diorama setting thingie. The convention doll is a new character that is not appealing to me at all. She has no eyelashes but her dress is nice. I would have been disappointed if I had gone to this convention. I am comfortable today with my collection and do not need more - although more is on the way. Let's see...there's the 1st club doll, Madison's doll, the Miami collection and the 2nd club doll. Hmmmm. That's plenty.


So I'm sitting here getting stiff and wasting my life browsing for Kelly items. Ugh. Why? I also want to keep checking the board to see who is offering convention items at a decent price. What is this need to keep accumulating more and more dolls? I have so many that I really love. They have lots of play value and I can barely keep up with photographing them. I really just want their clothes anyway. I don't have room for more dolls. I did manage to score the new Monsieur Z head and dress kit for $10. That was a steal.

So dumb. I don't even really like those faces. I want to close the mouth so she doesn't look like she has buck teeth. It seems to me that Integrity is giving the attendees leftovers as many of the gifts. The outfits from the first day were Playline items. Dressmaker Details gave out the usual blue shoes. The Integrity note cards and billfold with bracelet were new and useless items (to me.) I do like the diorama backdrop. It looks like a good item to use in photos. I'm sure many will be selling that one. I used the Barbie diorama items from the Barbie convention in many shots. That was a worthwhile purchase. And yesterday I made a deal to trade a premium Adele nude for a NRFB Fashion Royalty bed with someone who lives in the state of Washington. I want to set up some dioramas. I recently got some vintage Sindy items such as a room divider and a writing desk with bench. Also got a lounger and some beach umbrellas. That will be fun.

The rerooting of Traveler by Nature Veronique is coming along slowly but nicely. I am using black hair with some plugs of reddish orange. At first it looked like a Halloween wig....then it didn't...but in the end, it will look very contrived. That's OK. I am having fun and it is different.

It's Gothy. If I were going to IFDC next year, she could be entered in that category.
But I'm not.

Here's a funny offer from a buyer. She was interested in both premium Adeles but wanted to know if I would sell just the heads. I replied that I would but the price would be the same. Duh. What would I do with two headless AA bodies? 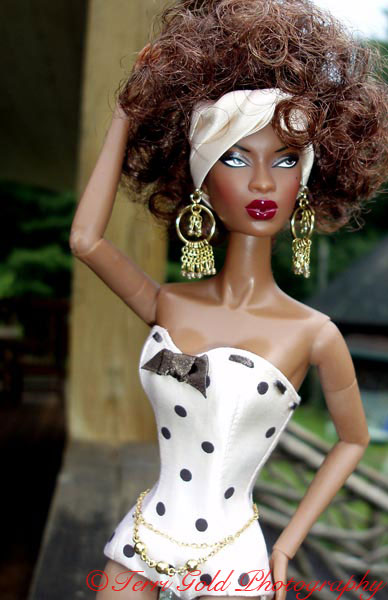 I have only three AA Fashion Royalty dolls remaining since I decided to stop collecting Adeles. I had all of them at one time and saved my favorite three but they have to go now. Via Venetto Adele was my first Fashion Royalty doll and she will probably be the last Adele to go. Her picture is above. You'd never know it is her because she is wearing a wig.
Posted by Terri Gold at 6/29/2008 10:51:00 PM No comments:

At this moment the Fashion Royalty Convention in Baltimore is 1/2 over with.

We went to IFDC this year instead.

I'm going to do some re-rooting now. It's very tedious. The reward is worth it. This is my second re-root. The pictures posted are my first. I used too much hair. But it came out great. More later, perhaps. 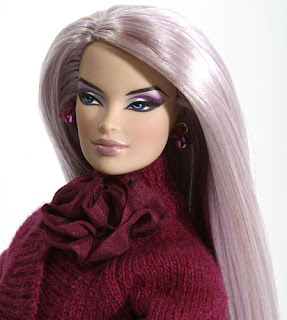 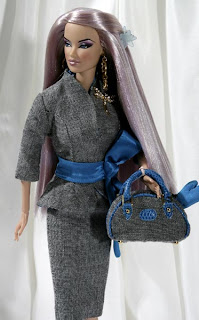