I realize that I haven't shown pictures of the beautiful gift set Sandra Stillwell created for us for the Golden Age of "Doll" Couture event in Nashville this past August. We received parts of the set at each of four meal events. The set was a limited edition of 50, all of which have sold out.
This week I took some time to play with the different pieces and take some photographs of the combinations and of the individual pieces so everyone can see how fantastic this set truly is. 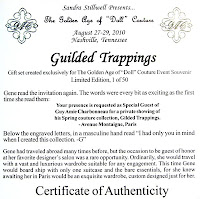 The Certificate of Authenticity reads as follows:


Gene read the invitation again. The words were every bit as exciting as the first time she read them:

Your presence is requested as Special Guest of Guy Amie Charbonneau for a private showing of his Spring couture collection, Gilded Trappings. -Avenue Montaigne, Paris.

Below the engraved letters, in a masculine hand read "I had only you in mind when I created this collection. -G"

Gene had traveled abroad many times before, but the occasion to be guest of honor at her favorite designer's salon was a rare opportunity. Ordinarily, she would travel with a vast and luxurious wardrobe suitable for any engagement. This time Gene would board ship with only one suitcase and the bare essentials, for she knew awaiting her in Paris would be an exquisite wardrobe, custom designed just for her. 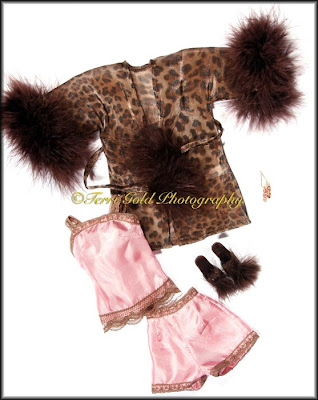 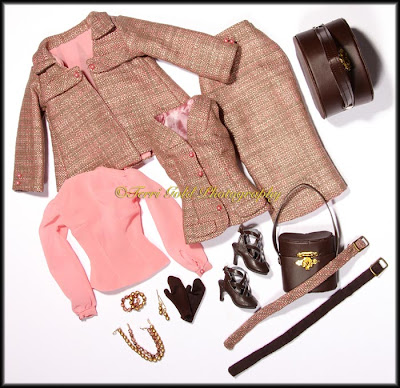 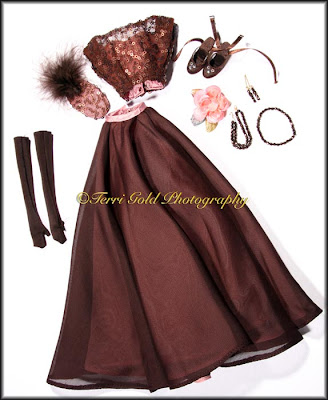 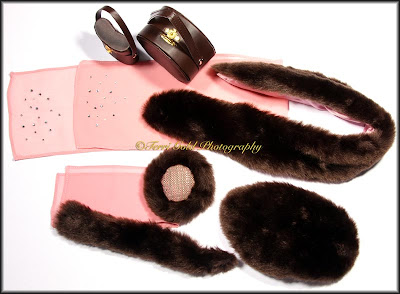 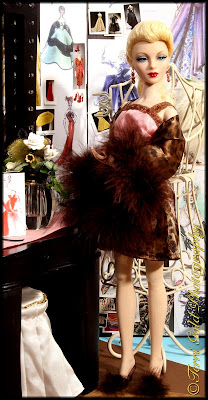 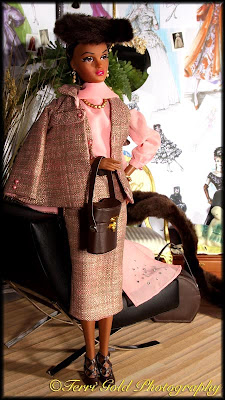 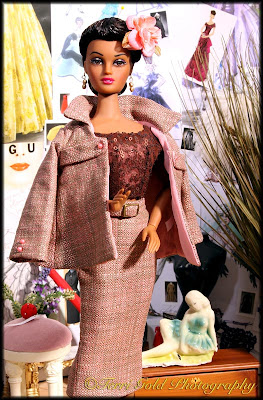 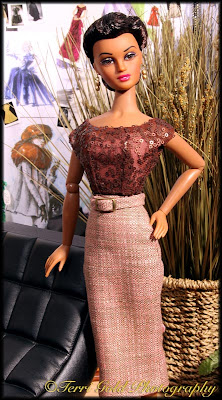 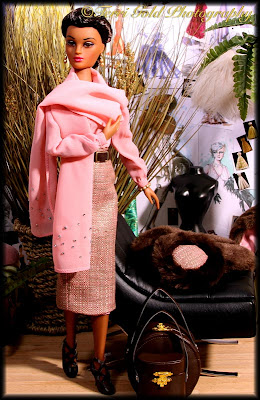 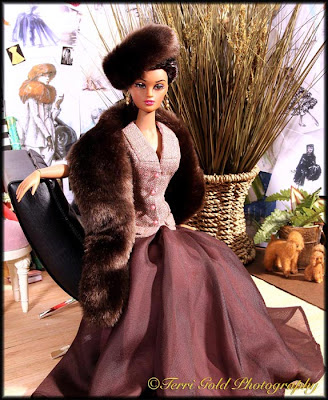 Every single piece shows attention to fine detail. The linings are perfection. The closures are zippers, hook & eye and/or snaps. The fabrics drape beautifully. There are three complete fashions and a multitude of options for mix and match. You can tell that a tremendous amount of thought and planning went in to this set. I just love the look of the last picture of Violet wearing the vest from the suit with the formal skirt, the long faux fur wrap and the hat from the suit.
The long shawl that she is wearing in the next to the last picture has rhinestones on both ends and on both sides! I've never seen that before.

Below are a few other pictures I haven't shown. 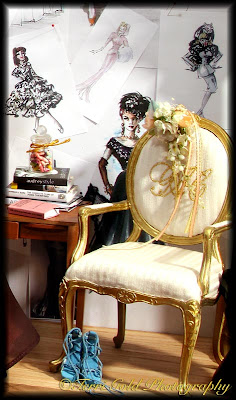 Above is the specially designed chair manufactured by Bella! for the event. The metallic gold embroidery is GAC (Golden Age of Couture or Guy Amie Charbonneau.) It was part of the centerpieces and an optional purchase. In the background is part of a 'wall' I created using the sketches of George Sarofeen. We were gifted with several full sized sketches as well as a miniature portfolio filled with many sketches. On the table, the miniature pink book is the one I mentioned above and JamieShow shoes are shown at the foot of the chair. The bridal bouquet is perched on the back of the chair.

I am having so much fun with all the goodies. I love stuff.

Look for my article covering this event with several unpublished photographs in the Winter Edition of FDQ in January, 2011.


TONNERDOLL.COM Website Update: We are still experiencing problems with our website, tonnerdoll.com.  As of this point, we suggest that you do not visit tonnerdoll.com either by direct entry or via an Internet search engine.
We are working on resolving the issue and will update you as soon as we can.  In the meantime, Tonnerdirect.com is still up and running and is safe to visit.
We apologize for the inconvenience this may have caused and we hope to have the issue resolved very soon.
If you have any questions or concerns, please feel free to email us at info@tonnerdirect.com or call us toll free at 800-324-0486.

Thank you,
Your Friends at Tonner Doll


MORE:
Please don't access anything until we send out a message with a validated status - we are moving the site to a new server and need to test it thoroughly. Until we send word out, please have patience and don't 'test' any such URLs you may find through search engines. TonnerDirect is unharmed by all of this as it's hosted on a different server.
Posted by Terri Gold at 9/14/2010 05:18:00 PM 1 comment: Links to this post

The last orders for remaining merchandise in the Haute Doll store will be taken in the next few hours. There's not much left but what remains is seriously reduced in price. 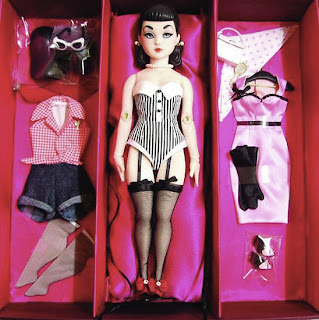 The "La Dolce Bambola" gift set was originally sold for $510.00 non-members/ $500.00 members  It is marked down to $300 now. This is a 1/6 scale French resin BJD of 29 cm or 11.4." Lingerie plus two resin wigs and two outfits makes this a fairly attractive package is you like the style of the doll. I think she'd be prettier with a different face-up and a non-resin wig.
--- 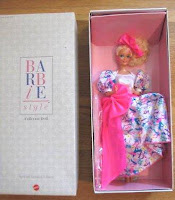 I don't know anything about this doll other than what the listing says: "NRFB 1990 Barbie Style Special Limited Edition collector doll #5315. $7.99
Anyone out there know something about this item?
___

Miss Sydney World has been listed in the HD boutique for a very long time. She was originally listed for $160 non-members/$150 members and is now on sale for $79.99
---

"Traveler Innoquii" is one of a series of four porcelain dolls from Superdoll.  This one was HD's exclusive and was so unpopular that they wound up including her for a very low price if one purchased another doll that was also hard to move.
I've been enabled by other collectors who were so excited at the sale price of $75., that their excitement was infectious and I ordered one. She's going to have to have that black eye removed to live here.

There is one other doll available - literally. There's one Royal Red Jac Tonner doll. @$150.

Anyone who knows anything about Robert Tonner knows he adores the vintage Miss Revlon doll from the 1950's.  It's not difficult to see why his reproductions of this favored series are so adorable and true to the original dolls.

They're so similar in fact, that they don't have the articulation we've come to love in more modern dolls. I wonder if and when these dolls become popular, will they evolve to a more articulated body.

I asked Tom Courtney why is the word "pink" in two of the doll's names. He replied, "it's a nod to the original pairings of names and cosmetics. In fact, one popular doll style was 'Kissing Pink'...and was even used if the outfit had no pink at all."
That's a cool factoid. So there was indeed a relationship between the cosmetics and the dolls if only in the name.

Photographs of the first three in the line have been released.

Has Gaga lost her sausages?

It was Fashion Week after all but I don't think we'll ever encounter this on the runway or on a doll although it would be pretty funny. A little minute steak, some heavy white thread, lots of rhinestone jewelry and voila! You have made a fashion statement and stinky doll. It would be a great doll for the Fashion Royalty travel doll competition. Dark Romance? Vampire meat lover?

One of Lady Gaga's costumes for last nights MTV awards was a dress made from raw meat. It was accessorized by a hat, purse and shoes made from meat as well. It looked quite fresh, too. 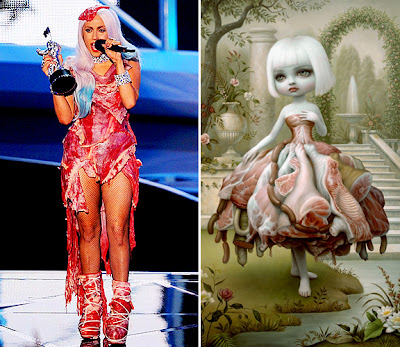 Writer Sharon Clott posted this comparison between Lady Gaga and a painting by Mark Ryden called Incarnation.
Has Gaga lost her sausages?

Picture of the Week ~ Wilco Vreeburg

Our featured photo today was created by Wilco Vreeburg also known as Wilco in Holland or Wilco in the Netherlands on the doll boards. Wilco posts mainly on Prego, The Studio Commissary, ICOG and the Yahoo Avantguard groups.

His picture is of the Avantguard "No Exaggeration." No changes have been made to the doll - as they say on Prego, "she is factory." 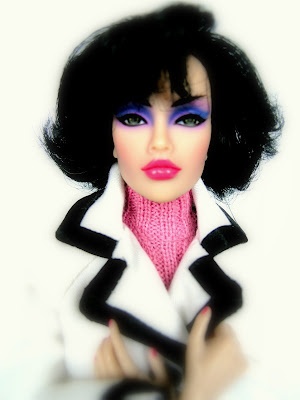 She has a very 80's look with the short flippy style Monique wig and the saturated make-up palette. Her coat is Tonner's 2004 "Ashleigh" and the sweater is also a Tonner product from the 2003 Tyler "Suitably Pink" doll.

I asked Wilco to describe his set-up and camera. Here is his response in excellent English.

"I used a big board and a white fabric to make a set-up directed into [facing] the natural light of the windows."  Only natural light was used.  "I use an Olympus C-8080 Wide Zoom."

His suggestions regarding doll photography is to let one's own taste and creativity reflect in your pictures. "If you don't have a studio or lighting like me...make sure you  use natural daylight."

In my opinion, Wilco nailed the 80's look superbly. This image is one that might have been on the pages of a fashion magazine of that era. She also reminds me of the character from the series Dallas, Sue Ellen Ewing, played by American actress, Linda Gray. That show ran from 1978 through 1991.

Thanks to Wilco for allowing me to feature his photo! Great work.