The award this week goes to Lisa Irinyi also known as Alex's Doll. 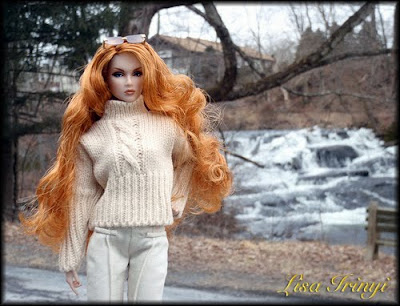 Lisa has shot a redressed Eden doll against a background of a stream. The sharp focus of the doll creates depth and separates her from the background effectively. The composition takes the viewer directly to the doll's face. Notice the diagonal line of the path or road in the lower right hand corner of the shot. Whether it was intentional or not, that technique is a well known one used to draw the viewer into the frame. The diagonal line of the tree branch in the upper right serves the same purpose. I might have cropped out the bench which would have strengthened the diagonals. The bench is interesting and I'd like to see more of it or none at all. It also helps that the doll is not dead center.
It's a great picture of a very popular doll.

Lisa's advice to doll photographers: "Take a doll and a camera with you (in the car, out for a walk) whenever you can. You never know where the next photo opportunity is going to be. Also, take lots of pictures. The more photos you take, the better you get."

See more of Lisa's work at these links:
Flickr
Blog: Every Day A Dollie

Congratulations, Lisa, on the Picture of the Week Award!

Every fashion from Joe Tai ought to include sunglasses. Moderation is not in his vocabulary.
That's not to say that I haven't had many of his fashions because I have. I love his wigs, which are often over-the-top, and his new, separately available 16" bodies are excellent. I will cover them in another post.
Below is "Classic Silvery Rose" Ingrid, a 12-inch dressed doll. The outfit consists of a separate bustier and a sequined ball gown skirt. Included: jewelry, underwear and hosiery, shoes, wig and stand. I'm assuming the gloves are also available although the description has left that out. If you like this doll, the price of $118.88 is not bad. They have excellent articulation and good weight. I don't care for the sculpt or the facial screening but the bustier and wig would be fun to have. 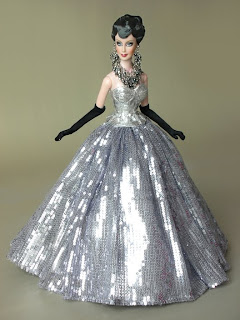 Another new 2010 12-inch dressed doll is "Spring Water Lily" En. She is wearing a traffic-stopping amount of sequins that cover her qi-pao and matching coat. Her boots pick up the mint green of the outfit. The jewelry repeats the color scheme endlessly. I wonder if the doll can lower her arms with that amount of sequins under the arm area. En comes with a wig and a doll stand and is priced at $108.88. 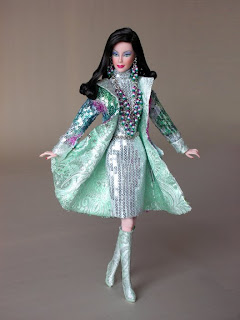 Both dolls are limited editions of 50 pieces and may be available from several doll dealers including Manika, Doll Market, Angelic Dreamz, Cherished Friends and The Doll Peddlar in the United States.
Go to Joe Tai's website to see other dealers and to get more information about his dolls.
Posted by Terri Gold at 2/12/2010 12:36:00 PM No comments: Links to this post

I like his sneakers and that's about it. The pretty boy face belies the raging wolf inside. 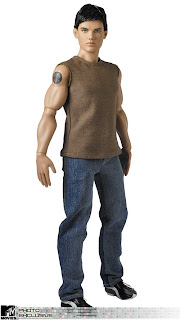 He doesn't even look native American. But then again I didn't like the Edward or Bella dolls either.
Jacob Black has Tonner's athletic male body and is 17" tall.
The retail price is $149.99 and there are 3000 of them being produced.
My suggestion...wait 4 months for the first discount. In one year you will be able to get him for much less.
Mattel has a Barbie Twilight Jacob Doll. He's $29.95, 12" tall and looks even dorkier than Tonner's. 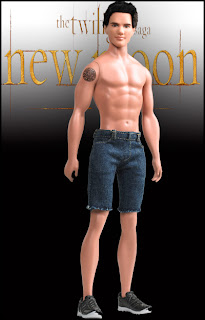 "Dolly Forever" Barbie by Christian Louboutin was announced today and Mattel is collecting names for a VIP wait list. Those whose names make it to the list are guaranteed to learn when she goes on sale. What a bunch of marketing hype. A total of 7,700 dolls will be produced worldwide for the price of $150. The boots and shoes are very nice. The rest of the doll is average. The safari style dress is a bore and looks cheap. And the anorexic, unarticulated body of these dolls leaves me cold. There's nothing exciting about Dolly Forever above her knees.
You don't really need to get on the VIP list at all. The doll can be pre-ordered from your favorite Barbie dealer.
Posted by Terri Gold at 2/11/2010 05:35:00 PM 11 comments: Links to this post

I just love the little Madame Alexander dolls and their accessories. I adore my larger fashion dolls but these little creations make me smile and laugh. Just look at this creation called "I'm Melting Witch" from the Hollywood Series. It comes with 1-1/2 dolls. The witch is melting into a puddle. Water is splashing out of 8" Dorothy's bucket. Tulle is flying upward as the witch melts into nothingness. It's just so adorable and sometimes I need adorable. 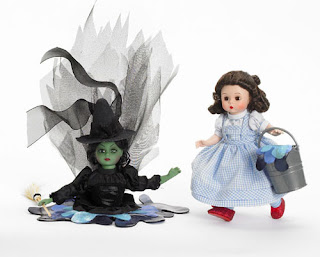 These images are from the Doll Market's website. It's fun to browse and sometimes they have sales...not very often, but last year I found two Cissy dolls for less money there than anywhere else.
This particular set goes for $69.97.

Here's a pretty 10" Cissette I'd like to add to my collection. The MADC does Rocketttes in different sizes. (The Radio City Rockettes Collection.) This sparkling beauty is called "Dancing In Diamonds" and her outfit is designed by Bob Mackie. It won't be released until May, 2010 and retails for $111.96. 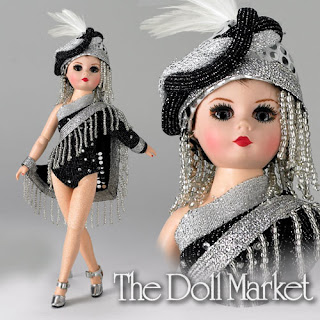 I like so many different types of dolls. I'm so doomed.

Bessie Coleman (January 26, 1892—April 30, 1926) was an American civil aviator. She was the first person of African American descent to become a licensed airplane pilot, and the first American of any race or gender to hold an international pilot license. Here is a delightful representation of Bessie as a 10" fully articulated AA Cissette in a wonderful aviator outfit. Like most MADC fashions the details are well done and smart-looking. 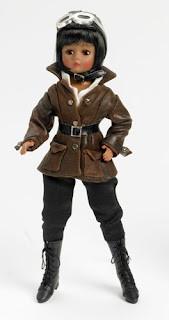 Just one more...
This is another version of Dorothy called "Dorothy And Ruby Slippers." She is a 10" Cissette who is clad in a modern version of the iconic fashion. Look at the accessories: three pairs of red shoes, little shoe boxes, Toto in a basket. Heavenly! 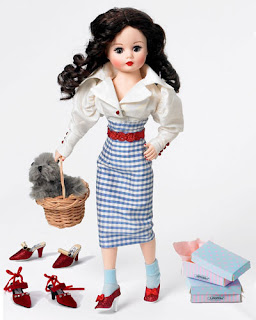 The retail price at the Doll Market for this doll is $79.97.

I'm starting to rethink my title for this article. Perhaps they are fashion dolls after all. I think I may need to broaden my definitions or get rid of titles.

Emails were sent out by Barbie Collector to all 2009 members reminding them to renew their memberships beginning today. Previous members get one week before membership opens to the public. The cost for one year is $24.95 plus any applicable tax.
The first Club doll is a Silkstone BFMC called "Palm Beach Honey." She would have looked so cute with Palm Beach Sugar Daddy. Don't you think?

Her price is $65.00. I was able to use a code to get $10 off. That code is A28844. I have previously mentioned that I don't collect Barbie dolls but I find it hard to pass up a pretty Silkstone doll.
If you've never joined the club, you will be happy to learn that during the year you get 4 discount coupons. This year it will be a $20., a $30., a $20. and a $20. There's always a Silkstone to pick up here and there and this is the best deal around! Additionally you can't buy the Club dolls if you're not a member unless you don't mind paying a premium on eBay. There's a chat board, a place for you to archive your collection and it's interesting to look around to find pictures of older dolls.