This is a big, big year for Mattel and it's Barbie line. Barbie's 50th birthday was celebrated in a huge way at Fashion Week, in Bloomingdales and on-line with a great deal of promotional advertising. I don't consider myself a Barbie doll collector but I've been known to buy Silkstones on a fairly regular basis usually as a result of impulse in response to pretty pictures. (I know I'm not alone.)
I pre-ordered the Caucasian Debut Barbie without hesitation. She looked great. My one word bottom line review for her is 'meh.' She's too Caucasian in person. The entire area above her eyes is too broad and empty looking. The AA one is prettier. And the brunette from the Paris Doll Festival is very lovely. The things that look like sequins on her bathing suit are actually tiny pieces of glittery stuff that comes off on your hands and everything else.
She's not awful but on a scale of 1 (low) to 10 (perfect), she ranks a 5.5.
But I couldn't NOT buy her because of the repro-look. She won't be voted off the island immediately.

The best of both worlds — vintage and modern — come together to celebrate Barbie® doll’s 50th anniversary! Robert Best has created an amazing interpretation of the original Barbie® doll from 1959, with a Silkstone® twist, of course! From the chic upswept ponytail to the sparkly black and white bathing suit to all the sensational accessories, this glamour girl will set tongues wagging. Gorg-eous! Designed by Robert Best.


Gal on The Go is the first of a series of Club Dolls being offered this year. She has a very pretty face and I like her short curly hair style. The quality is very good on this gal and the colors of the outfit and her screening are excellent with eachother. I give her an 8.

All work and no style play is not an option for today's woman as the office meets the runway. Gal On The Go™ Barbie® Doll wears an inspired take on 1960's fabulous Busy Gal™ ensemble. Recreated by Robert Best, this exquisite doll and fashion perfectly celebrate Barbie® doll's 50th anniversary.

This lovely doll is called Southern Belle and is now my second all time favorite Silkstone after Provencale. I am thrilled with her delicate facial screening and beautiful hair. Her dress is nicely constructed and the heels on the shoes are not bent and curved like so many. Happily she does not come with a bent elbow left arm as shown in the promotional photos. This doll has my highest recommendation of the three. I'm giving her a rating of 10!

This doll begins a new collection called The Blonde Ambition Collection which also includes an adorable Goldie Hawn doll. It is not the first time Mattel is reproducing the actress. In 1997 three Barbie dolls were released which portrayed Marilyn wearing some of her most famous fashions in "Barbie as Marilyn." The series consisted of two dolls from the movie "Gentlemen Prefer Blondes" and one from "The Seven Year Itch."
In 2002, Mattel released two dolls whose features are intended to portray Marilyn Monroe herself, in "Timeless Treasures Marilyn" One was a sad replica of the Happy Birthday gown and the other was a fashion from "How to Marry A Millionaire." It came with a second fashion.
There are other companies who have put out Marilyn Monroe dolls and if you are interested you might want to search them out on the web. I have made the names into links to websites that either feature, sell or discuss Marilyn Monroe dolls.
They are Tristar, World Doll, DSI, Franklin Mint and Madame Alexander. And then there is always eBay on which a search for Marilyn Monroe doll returned 189 results.

Two new Marilyn dolls due to arrive in July of this year are from Madame Alexander. One uses the 10" Cissettte body and is called Marilyn Monroe Collection Seven Year Itch. LE 350. I have a fondness for the general high quality of MA dolls. These little Cissette dolls are delightful and this one will find her way into my collection. I don't know if she has sleep eyes or if they are painted. But she's a cutie in the iconic white dress whose hem is wired so it looks like the wind is blowing it upwards. She's got her trademark beauty spot on her cheek. Adorable! We're looking at a Pre Order price in the $110 range.

The second Marilyn from Madame Alexander uses the 16" Alex body. This doll oozes glamour and is absolutely gorgeous dripping in 'diamonds.' She is called Marilyn Monroe Collection Gentlemen Prefer Blondes. LE 350. Pre Order price is about $145.
I want her! 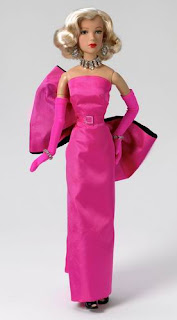 Magda
This week's award goes to Dan Lee. Dan is a multi-talented doll artist who re-roots, re-paints and sews! Yes, he does it all and he does it good! This image attracted me immediately for it's composition, color and the soft focus.

You can see more of Dan's fabulous work at his website "Wide Eyed Girls" http://www.wideeyedgirls.com/