I adore this fashion! Every attendee at the convention received this fashion at the Friday afternoon luncheon. It's just perfect in every way - the hot pink and black contrast is young and fresh and the little girl styling of the blouse and short flare skirt work together. The boots are faux suede and are remarkably easy to get on even over fishnet pantyhose. The handbag is another Fashion Royalty keeper in faux alligator with chains.
The first photograph has Kyori posing on one of the Dynamite Girl chairs we received in a package of 5 assorted colors. They make great props.

The much anticipated second Giselle doll, Masterpiece Theatre Giselle Diefendorf, was part of the 2008 Wu Convention collection. (I added the red handbag.)

I like the sculpt but I hope future versions go back to the softer look for Giselle.
In this picture I have dressed her in part of Yuri's (Misaki) outfit. She has a Sybarite purse tucked under her arm and a Volks' top under the vest. The glasses are from a convention accessory pack. Tights and boots are her own.

I look up everything on Wikipedia.

Tatyana is a Slavic female name derived from the Roman name Tatianus, which was derived from the Roman clan name Tatius. Saint Tatiana is considered a patron saint of students and Tatiana Day is now an official school holiday for students in Russia. There was a Princess Tatiana Konstantinovna of Russia (right) and her distant cousin Grand Duchess Tatiana Nikolaevna of Russia. (below)

I might also add that Tatiana is the name of a Siberian tiger who bit a zookeeper's arm severely and about one year later, after an escape from the tiger grotto, killed one patron who had been taunting the tiger and injured two others. The tiger was killed by police.

Fortunately none of these pictures looks in any way like the doll we received on the last night of the 2008 Jason Wu Convention, although the Princess looks to have been quite beautiful. Our Tatyana has pale porcelain-looking 'skin' and is wearing an unusual dress and hat as you can see in my photos.

The dress is constructed meticulously and fits perfectly. The shoes echo the royal blue and black of the garment. She sports a large faceted blue rhinestone ring which I love and her earrings and bracelet match except fot the big plastic drop hanging from the earring. That is the only sour note in the entire ensemble. Why the big blue plastic blob when the rest of the jewelry is metal and rhinestones?
The hat sits well atop her updo. It is a stunning hat but I need a faux fur wrap to match, perhaps with little fox heads and tails. That would be so fun.
Today I changed her outfit. I took some time holding garments up to her face to find a color that would not make her look washed out. Here are the results:

Tatyana is wearing a gown made by a Thai dressmaker and Agnes' Drama Behind the Drama faux fur coat. I think she is staying.
Posted by Terri Gold at 10/14/2008 08:03:00 PM No comments: Links to this post

When Stephen Fraser began designing for the 11 - 12 inch crowd, he stated that his fashions would be similar to those his wife might wear. I took that to mean they would be classic designs, not overdone or gaudy. There have been many fashions that fulfilled that description that were lovely and simple and enhanced the appearance of the dolls. Some of them were a bit dowdy-looking because of the colors used; many of them had fitting issues and most of them included accessories that looked cheap.
I have avoided buying any DD fashions first hand for the last two years. Those that I did buy were sold to others not long after arriving in my collection. On impulse I purchased a new outfit at the Wu Convention recently. This is called Kalyna. According to Wikipedia, Kalyna is a highbush cranberry plant found in East Central Alberta Canada. It's flowers are white and the red fruits which look like cranberries are edible.
OK...so now I know why the outfit was called Kalyna - it's red. It has white flowers in the spring and bright red edible berries in the fall. The stole is white. That's where the outfit's sense ends.
It looked really cute on the model at the show table. I needed more red clothes for my holiday doll picture.
I put it on one of my prettiest dolls and took it off an hour later. This image is from the Dressmaker Details website and it's a great picture! I love the white couch and the 'painting' behind it.

The first thing I did when I took it out of it's package was to remove the small ribbon bow which holds a tear drop shaped rhinestone at the bust line. It just didn't make sense with all that other jewelry. It comes with thigh high panty hose which never stay up so I just left them in the box. The necklace is over-scaled for these dolls. I may put it on one of my 16 inch gals The earrings have an odd aurora borealis bead between the stud and the dangle; I removed it. It was at that point that I realized that things were added to the ensemble just to have more stuff. More isn't always better and it doesn't make up for a lack of fine design. The little white gloves and cheap-looking stole were useless. The silver clutch bag has sparkly ornamentation on the flap. Meh.
And then we have the shoes. At least they fit.
I am spoiled by the haute couture of Jason Wu's fashions. When other companies charge similar prices to those of Integrity Toys, I have come to expect similar quality and I am disappointed.
Can you guess how much this outfit cost? I feel like such a jerk. It was $85.00. I know. Stop laughing.

The first is called A Little Moonlight. This ensemble was sold out at the major dealers fast. It is a lovely gray with silver dot chiffon halter dress circled at the waist by a silver belt. The accessories are clear beaded cluster earrings, silver handbag and shoes.
None of the shoes from any outfit fit properly. They don't go on all the way although they are not too small. They're just not made properly. This silver handbag is slightly misaligned and doesn't close all the way. It has velcro which is not strong enough to hold it shut.
Overall the outfit is beautiful and it's a keeper.
The model is a True Royalty who has been rerooted. She is wearing her own bracelet and shoes from Jennifer Sue. 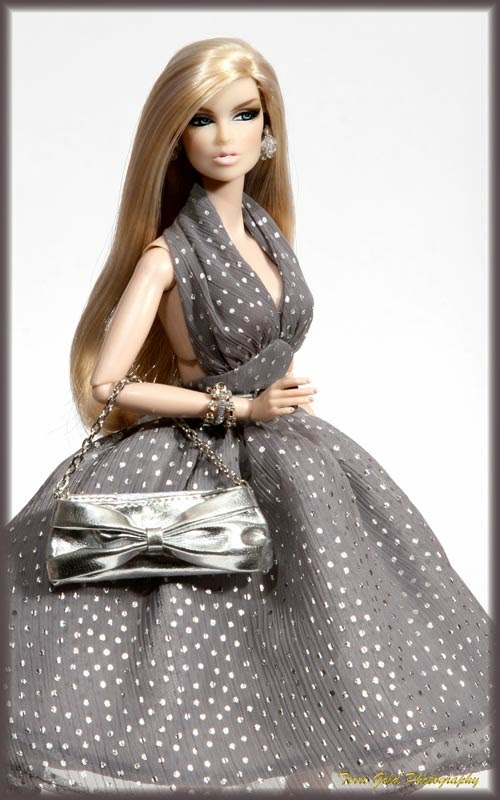 The next outfit is called Solitude. LE 100. It is a slim column of satin with a band of sequins and gold braiding at the shoulder/neckline. Just under this neckline the dress is gathered. According to the Randall Craig website, the fabric is cut on the bias in order to create the lovely drape.
The accessories are dangling gold and black earrings, 4 small gold bangles, a gold clutch bag and shoes (that don't fit.)
The Model is She Means Business Veronique whose hair has been restyled by a Thai dressmaker. She is wearing black specator pumps with gold heels from Jennifer Sue and a "diamond" ring from Hilda. 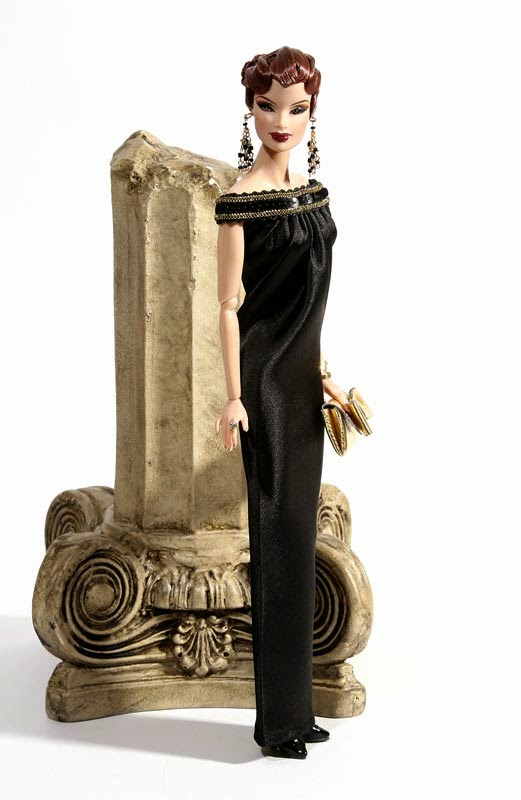 The last is called April in Paris. This outfit consists of a beautifully constructed sleeveless chiffon print top, high waisted skirt with a gold belt. The accessories are a gold handbag, earrings and shoes. There is a papery flower as well. I really love this outfit but the skirt is a bit too tight. It's difficult to get the stand between the doll's legs and the tightness shows up in the crease across the hips. It is a great, classic day outfit and another keeper in spite of the small sizing issue.
The model is the new doll in Fashion Royalty's Hollywood Royalty series, Josephine Baker. She is wearing her own shoes. 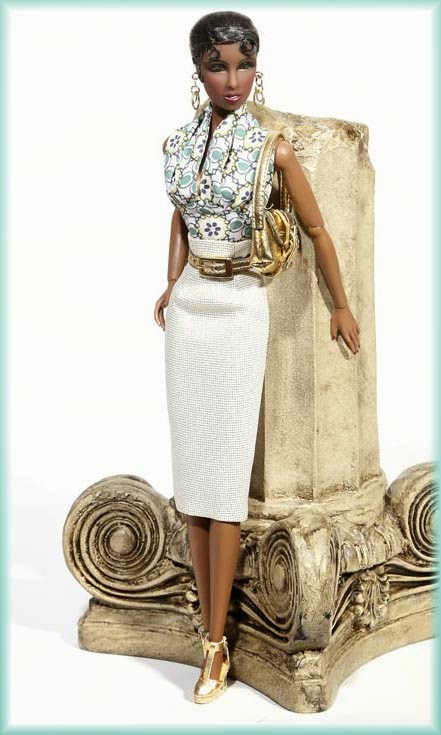 I admire Randall Craig and his work. He himself is a master tailor. I have seen fashions he has remodeled into fabulous creations. These fashions are constructed in a very professional fashion. There is no scrimping on the tailoring. The shoes were disappointing but they were run of the mill plastic pumps and my own collection of shoes is more suitable for these fashions.
Posted by Terri Gold at 10/13/2008 01:13:00 PM 2 comments: Links to this post