My Numina Devon, an FDQ exclusive, arrived today. I had just a little time to take her out of her box and admire her.
She is even more beautiful in hand than in photos. Her creamy silk dress has amazing metal epaulets which are topped with beading...just gorgeous.
Her sueded joints look wonderful and I am looking forward to playing with other fashions and wigs after I photograph her.

Paul posted the photo of the OOAK Devon, below, on his site. He created her for Leigh (Leigh in ME) who produced the necklaces for the FDQ Devon. It's another gorgeous creation.

A reader sent me the following regarding the inspiration for Anja's gown:

The Silhouettes and fabric feels very simular [sic]. Only with Dolce they used hand painted chiffon while with Anja's its embroidery.

The year was 2005 - a year of amazing Fashion Royalty dolls including:
Born to Gamble Kyori 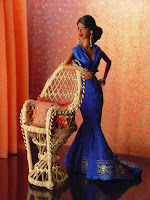 A Fashionable Life Raven and Platinum. 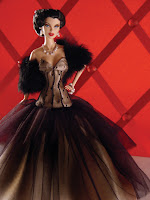 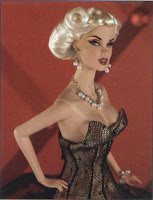 It was also the year for furniture including the chaise, coffee table, liquor cabinet and bed.

I started collecting FR in earnest that year as well. I got the platinum AFL right away but it took several years to get her sister. This week, they were both redressed in Talking Drama Adele's gown. I dyed the steel blue version. 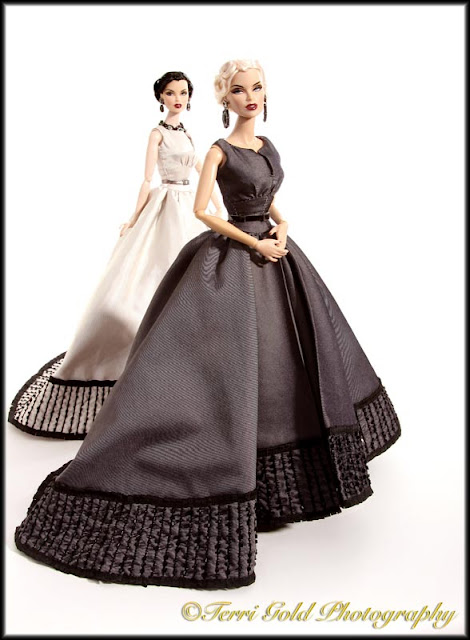 I love these dolls. There is something about handling the 'older' Fashion Royalty dolls and redressing them that is very satisfying and comfortable. 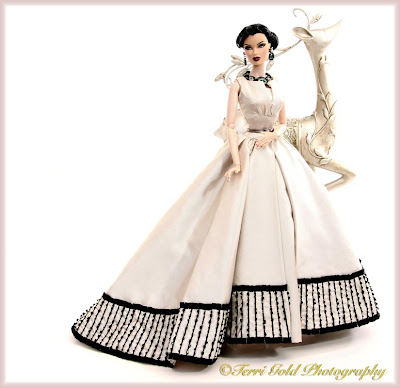 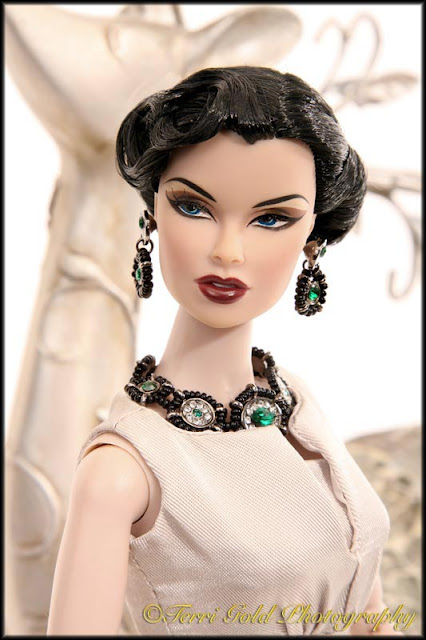 W Club members received an email explaining the situation with the factories in China. They reported that due to "changes" there is a high turnover of employees resulting in fewer employees who are now overburdened and need training. Another consequence is that less items are being produced and waiting periods are longer. Higher prices come along with this.
I vaguely remember that Jason said there would be a mini-collection at the end of the year. I assume that will not happen.

The image above is one of many from a very interesting installation by photographer Michael Wolf. The caption under the image is the link to the story and more pictures about toy factory workers in China in 2004. Hopefully conditions have changed.

Also announced :
-Integrity's "Toy Fair" will be held on-line (again) and they said the event doll is awesome.
-The 2011 convention will be held in Schaumburg, IL on October 6—8 with a cocktail reception on the evening of October 5.
-There will be a club exclusive Poppy Parker doll.

Link to the article in the Onion:
Chinese Factory Worker Can't Believe The Shit He Makes For Americans


*Note to Trolls: This article does not say that Integrity makes shit.

Dania Zarr "Lady in Waiting" is the first of two 2010 W Club dolls. She arrived a few days ago and had her photo shoot last night. She looks just like the promotional photos... 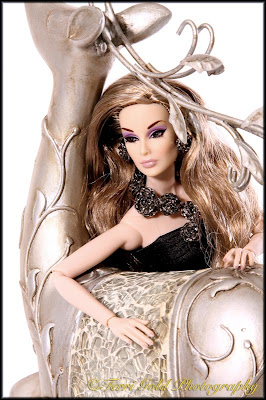 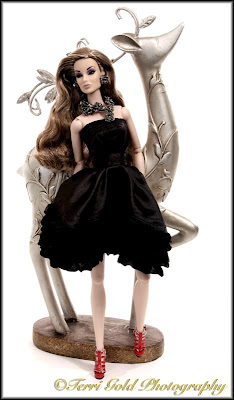 until you start to comb her hair to get the flyaways and other distracting hairs fixed. The more I tried to smooth it out, the worse it became. I used three different products by the time I was done and it still wasn't perfect. Photoshop helped this image a great deal in that area.
The jewelry is interesting. The earrings are overscaled and in real life they would tear her ears off. The necklace is stunning and I've seen loads of huge neckpieces on the market recently. It can be gently adjusted. My recommendation - put it on before you do her hair and tape it in place temporarily. It wants to turn around backwards.
The dress came with a stitch holding the skirt to the box between her legs which created a dip in the fabric. The bottom of the dress is rather stiff due to the applied ruffles so I don't know if that can be steamed to make the shape more moderate. I think if it were carefully pinned to shape and then steamed, it might hold. Her shoes are the omnipresent gladiator style with a platform sole. 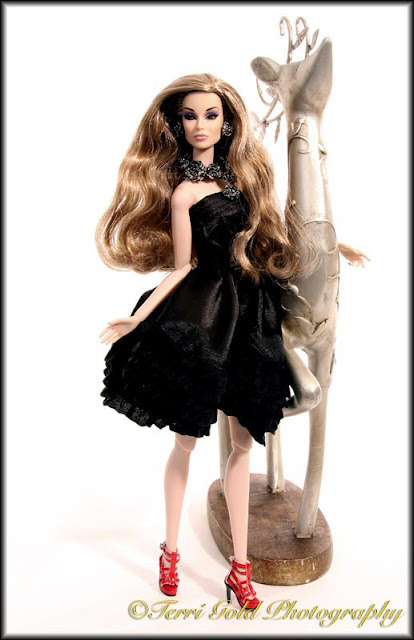 W Club dolls are expensive when you do the actual math.
There is the base membership of $50. which shows up as $25 in the math below.

There's also the upgrade membership which, this year, included the option to purchase an Avantguard doll (Freeze Frame) and a Fashion Royalty doll (Spring Forward Eugenia) neither of which I kept. That membership cost an additional $105. above the base membership. At least I think it did. The dolls were an additional sum.
Posted by Terri Gold at 12/06/2010 12:12:00 PM 11 comments:

I searched couture images everywhere this afternoon looking for a style that could have been the inspiration for Anja's gown. There are plenty of hem lines that are shorter in the front. The photo below shows last season's Avantguard "Hot to Trot" in profile compared to "Regal Solstice."
Another collector sent me this image of a Balenciaga design which certainly inspired "Hot to Trot." 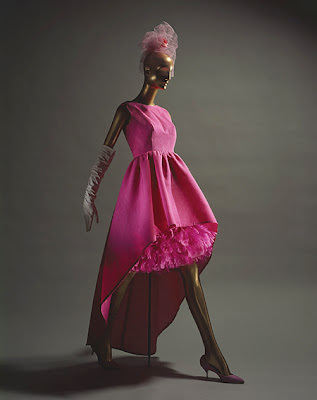 The Dior below has many design similarities and may be the closest couture item that could be identified as inspiration for Regal. 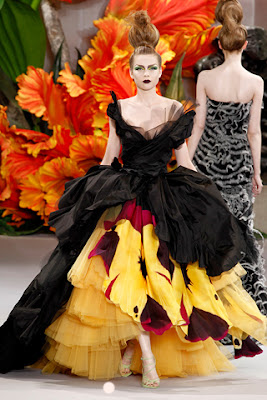 I could not find the shape of the bodice which resembles opened petals that stand away from the body. I'm starting to think that the factory may not have interpreted the look properly. I believe the images we were presented with are prototypes.
The Valentino dresses below show a wrapped style that could be related to Anja's gown as far as the gathered, ruffly upper part. But these dresses have a closer fitted bodice that is very flattering to the female body and works with the rest of the fashion. Hopefully, there will be an adjustment in the bodice on the finished product for Anja. 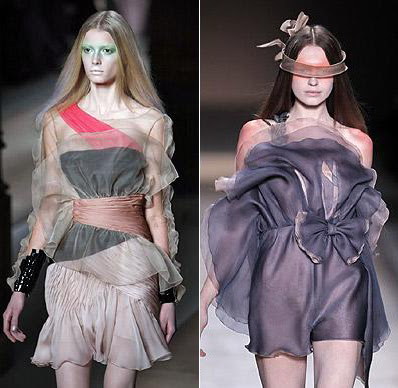 If I could sew really well, I'd fit the bodice to the body more closely. Then I would add many more layers of tulle under the chartreuse as can be seen in the black/yellow Dior above. I'd get rid of the black straps that look like a bra and pick up one of the brighter colors.

I give the designer/s an A for effort. Now if only the factory could interpret the designers' wishes to provide us with an edgy as opposed to messy fashion.

Some Armani and Dior eye candy for your enjoyment follows: 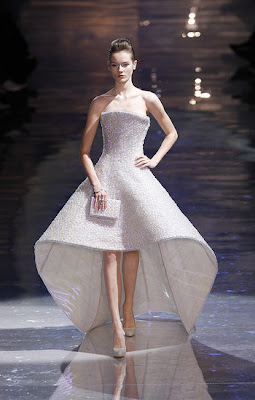 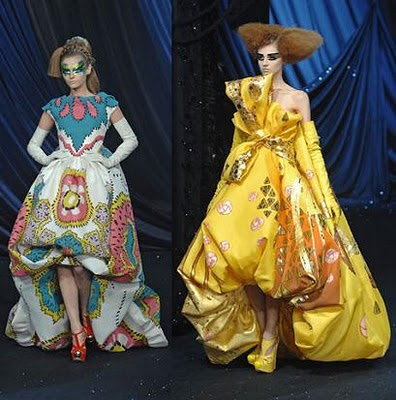