In this final 2012 post, I look back over the last 12 months to find what I've actually kept out of the hordes of dolls and doll items that I purchased.

My doll collecting has changed dramatically over the course of the last two years. I started adding Sybarites and other 16" resin BJDs to my collection and continued thinning my 12" doll army. I've focused more on adding more clothing for all my dolls and filled in a few Tonner dolls, outfits and props that I've wanted. I scored 7 Cholo Ayuyao gowns and dresses. I've switched many of my favorite 'older' dolls to new FR2 bodies.

The biggest mistake purchases were impulse buys consisting of mostly Mattel products, not including Silkstones, although I was disappointed with many of the 2012 Silkies. The Monster Highs and several dressed vinyl Barbies were momentary goodies which added nothing of substance to my collection. I wasted a little money on outfits made by other collectors which did not live up to my expectations.  Ultimately, I was surprised at how many dolls I purchased and didn't keep or traded for something else.

Moving was time consuming and very disorienting and I'm just now starting to see a tiny crack of light at the end of a long tunnel.

Instead of posting 'normal' photos of my favorites, I have made Instagram pictures of some of them. Why? Because they're cool, it's fun and I'm bored with normal pictures.

Sybarites and their fashions played a large part in my collection this year.
Vapore: 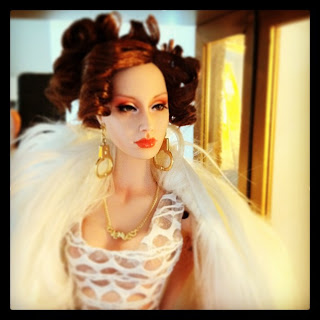 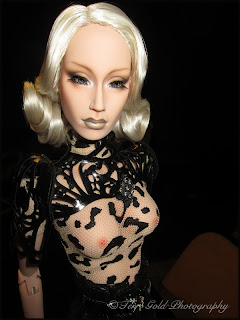 Neurotica: (Redressed/Rewigged) Actually, she's not dressed at all. She is holding the shrug from a gorgeous SybMonde exclusive fashion, Rosa Gloriosa. Wig by Cheryl Wood. I added several of her wigs this year. 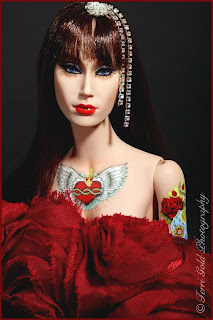 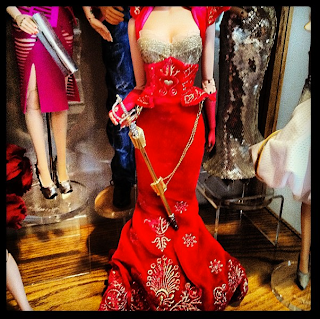 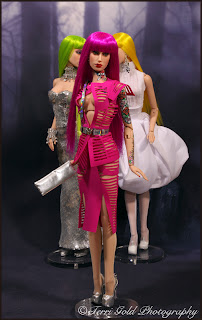 Speed modeled by Talc. It's an older fashion but new for me. 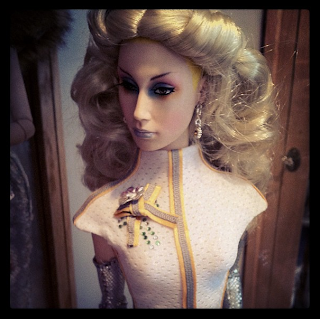 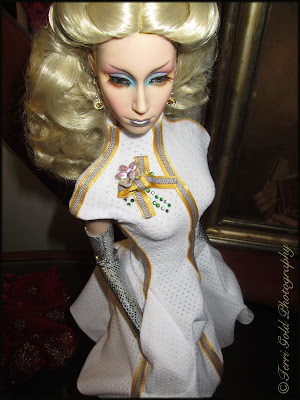 JamieShow
JamieShow Alejandro and the Jamieshow outfit from the Prohibition Event in Canandaigua. He is my first and only male resin BJD and definitely a keeper. 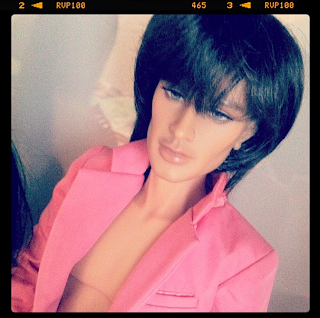 Tonner
Tonner's new Precarious sculpt and fashions designed for her were big hits IMO. I purchased two of the dolls and several of the outfits.
Ficon
That's it for the big dolls. It feels like there should be more because all of my Tonner's were the first dolls to be packed along with my Gene Marshall dolls. They were packed for almost one year by the time I was able to get them back out of their boxes and into showcases. Many seem new to me all over again. I can stare at the dolls and love each and every one of them. Unloved dolls find new homes.

Integrity Toys' Fashion Royalty, FR2
This is a little more complicated to show as I added very few complete dolls this year from IT's lineups. I kept more fashions than dolls. I even purchased an older Vanessa NRFB so I could have an unaltered version.
I may have mentioned previously that there seems to be a disconnect in the design team. By that I mean that someone in there is a really bad designer and that would be the person that designed most of the recent convention's outfits. That was the worst collection I've ever seen.  However, during the year there were some gorgeous fashions worthy of the name Fashion Royalty.

I liked both of the convention's FR2 dolls but Dasha's outfit was less than stellar. Elise was totally gorgeous.
Of the other three FR2 dolls released in 2012, it was mainly the fashions that interested me.
Tatyana's red dress.
I finally broke down (like that's difficult) and purchased Opium Ayumi. Her outfit looks better in person than in pictures.
My favorite fashions all year were Main Attitude Adele Makeda's suit

Your Kind of Model Kesenia's outfit
Monogram Admiration's suit
My favorite dressed Monogram was Allure
From the Victoire Roux line, I kept only the outfit from Place Vendome. Vanesssa looks stunning in it. 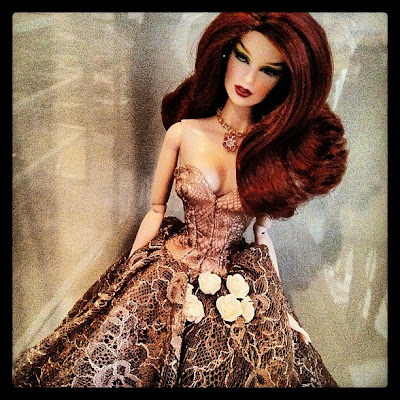 These outfits are keepers. Now if I could find the perfect male doll to wear them. These four photos are all Integrity Toys' images. 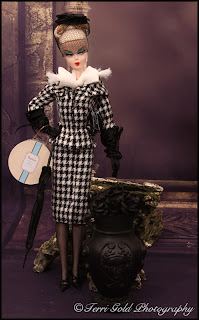 There is more but you are probably snoring already.

Companies have to stop going backwards with the quality and appearance of their products. When this happens, the perceived value drops and collectors will search out other items.

I am so far behind with my photography that it's not funny. Yesterday I took a bunch of my Sybs and other BJDs down to the studio for a shoot. It's a set-up for failure to have to take pictures without a plan other than "cataloging." Anyway, here is some of what I turned out. 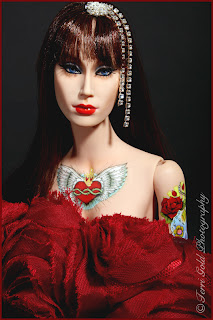 "Neurotica" in a Cheryl Wood wig and Rosa Gloriosa cape. 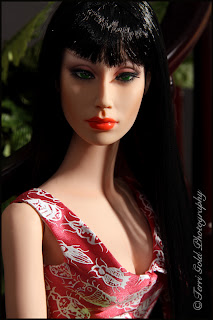 "Dionysis" in Bugged and a Cheryl Wood wig. 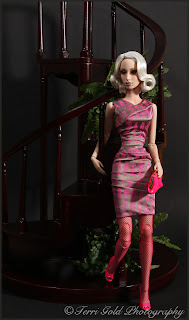 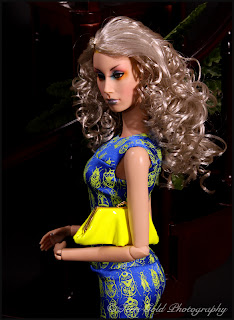 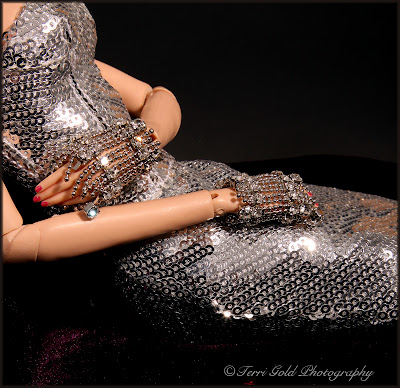 Walt Disney Studios has just released this striking character featuring the Wicked Witch of the West as envisioned in their upcoming release, Oz the Great and Powerful. 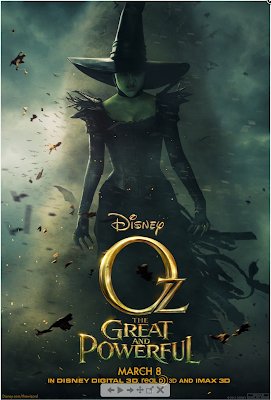 Disney’s fantastical adventure “Oz The Great and Powerful,” directed by Sam Raimi, imagines the origins of L. Frank Baum’s beloved wizard character. When Oscar Diggs (James Franco), a small-time circus magician with dubious ethics, is hurled away from dusty Kansas to the vibrant Land of Oz, he thinks he’s hit the jackpot—fame and fortune are his for the taking—that is until he meets three witches, Theodora (Mila Kunis), Evanora (Rachel Weisz) and Glinda (Michelle Williams), who are not convinced he is the great wizard everyone’s been expecting. Reluctantly drawn into the epic problems facing the Land of Oz and its inhabitants, Oscar must find out who is good and who is evil before it is too late. Putting his magical arts to use through illusion, ingenuity—and even a bit of wizardry—Oscar transforms himself not only into the great and powerful wizard but into a better man as well.
“Oz The Great and Powerful” is produced by Joe Roth, with a screenplay by Mitchell Kapner and David Lindsay-Abaire (credit not final). Grant Curtis, Palak Patel, Philip Steuer and Josh Donen are serving as executive producers. “Oz The Great and Powerful” opens in U.S. theaters on March 8, 2013.


For us, it's all about the dolls. These are the only images I could find. I'll be on the lookout for more information regarding release dates, availability and prices. They look very interesting. If you are an OZ lover, these may belong in your collection.  They do not look like Barbie. Yay. 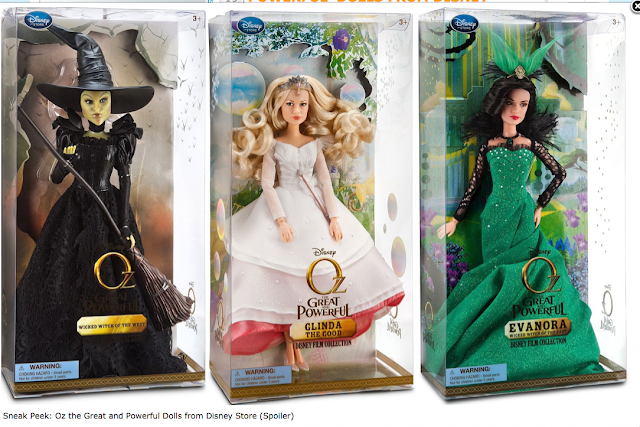 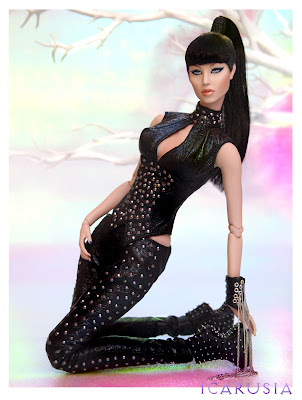 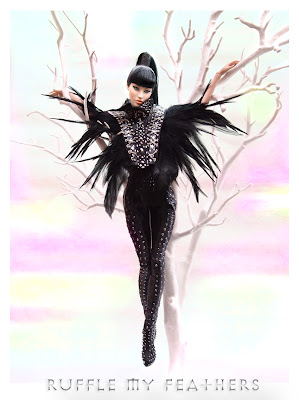 Two in one day. This one is in a fantastic outfit. Wow. 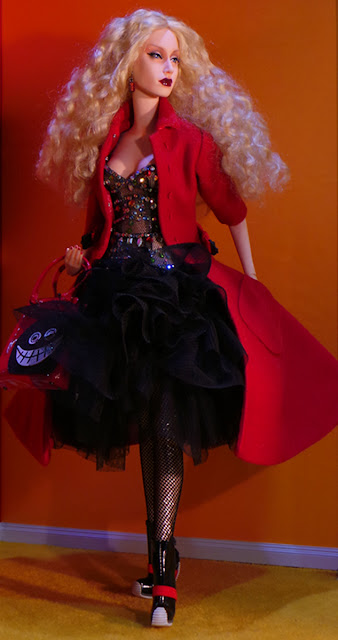 It was recently brought to my attention that the Monster High dolls made in Indonesia have a serious problem. Apparently after the dolls' heads are rooted, a glue is poured into the head to secure the hair.
The following links were sent to me with so much information that I thought it was important to post this here. I haven't checked my MH dolls yet. Luckily I have only a small collection of these creatures.


What do you think? 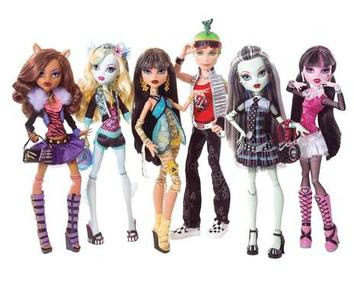 "Rumour has it that I frequent the ghetto's of Fashion"

Yesterday I posted a question on Prego and the results were often hilarious. Here is the thread copied in it's entirety. If you are not a member of Prego, the links will take you to the opportunity to sign up.


You know you have too many dolls when (fill in your own response.)

Here are pictures of the four trees I set up in our living room and dining room. 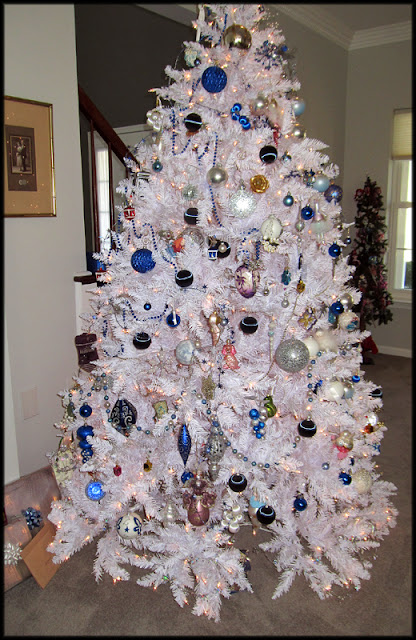 This Chanukah tree turned out so beautifully that I wanted to take my good camera out of the studio and set it up to shoot pictures...but I've been so camera lazy lately. It's terrible. So I just took a bunch of individual shots.
I want to keep it up forever. I'm mesmerized by the delicate glass and the sparkling beads and the lights and the ornaments I made. 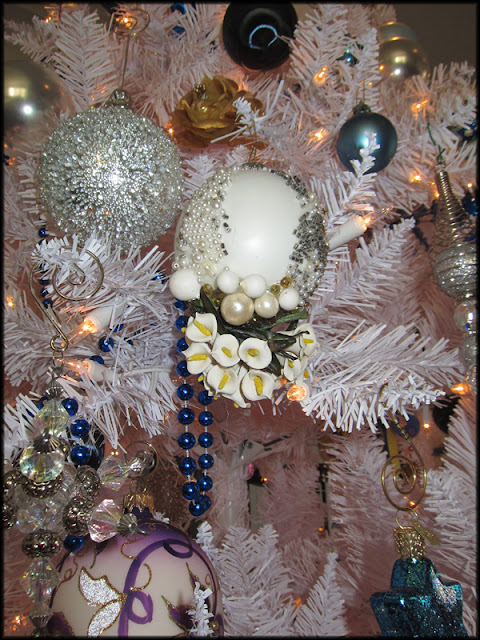 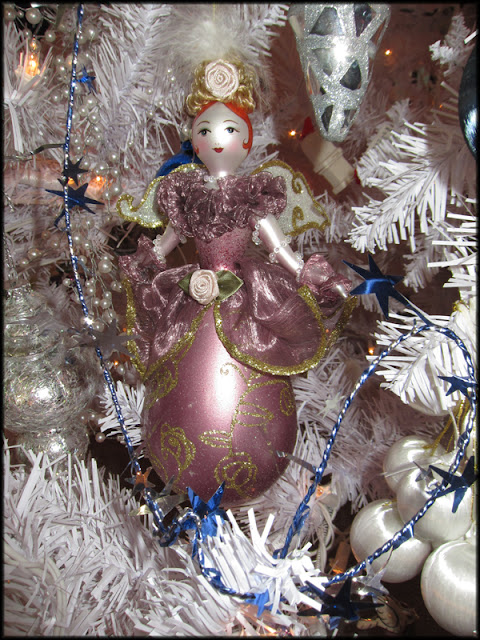 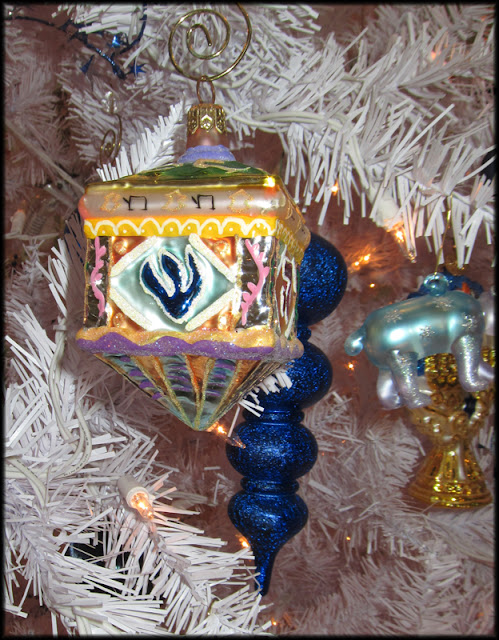 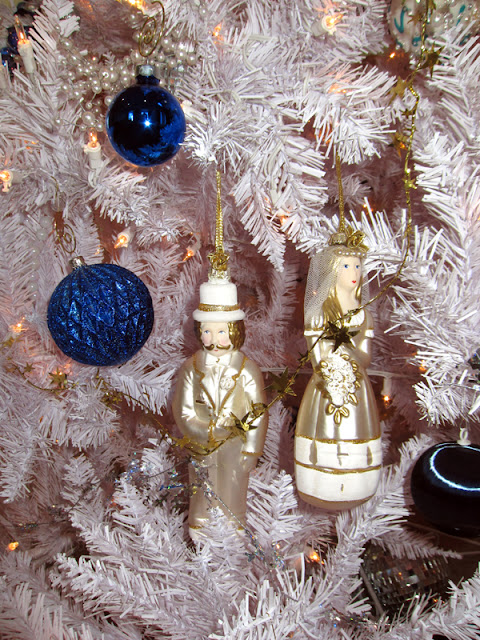 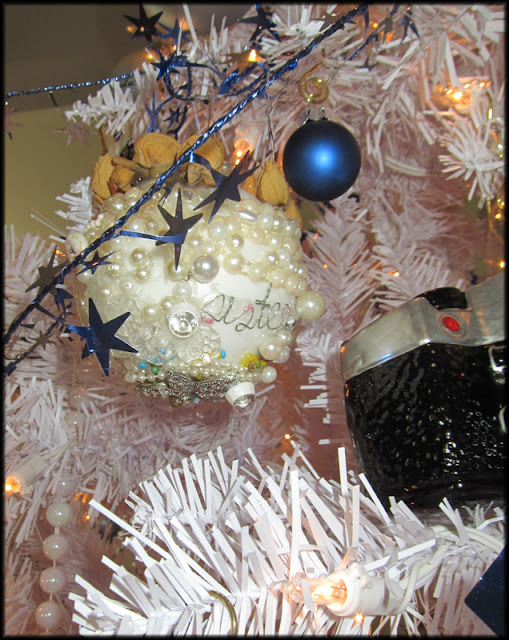 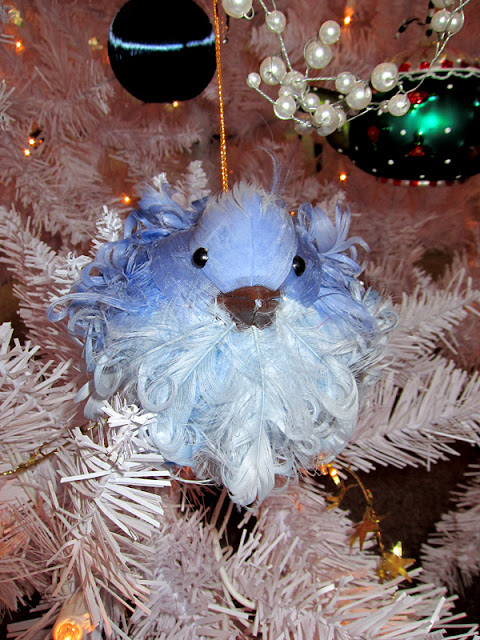 I had a really great time decorating the big tree and the small ones, especially the last one pictured. It made all the difference in the world that I would be sharing them with guests.  They loved them and the children were wowed by the Monster High tree.