Jem and The Holograms

Jem, also called Jem and the Holograms, is an American animated television series that ran from 1985 to 1988 in U.S. first-run syndication. The show is about music company owner Jerrica Benton, her singer alter-ego Jem, her band the Holograms, and their adventures.
The series was a joint collaboration by Hasbro, Marvel Productions and Sunbow Productions, the same team responsible for G.I. Joe and Transformers.  The creator of the series, Christy Marx, had also been a staff writer for the aforementioned programs. The animation for most of the episodes was provided by the Japanese animation studio Toei Doga (now Toei Animation). -Wikipedia 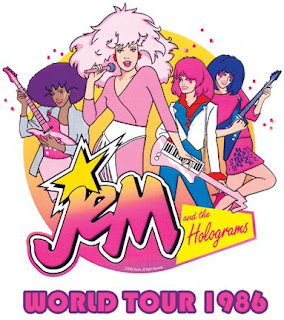 Presented below is the "First Wave" of Integrity Toy's new Jem and the Holograms doll line.
The editions of all the dolls is 1000 except for Rio whose production size is 850. 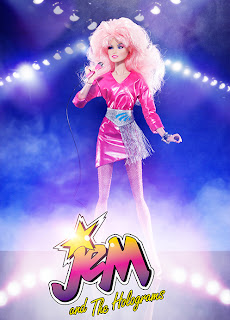 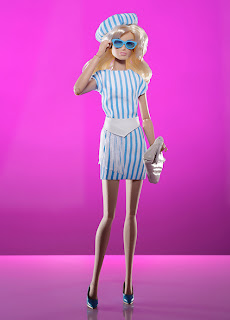 Synergy This doll appears to use the Elise Jolie sculpt. 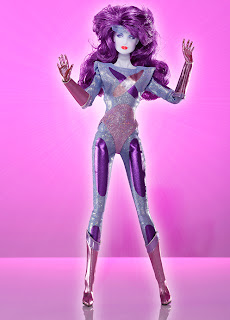 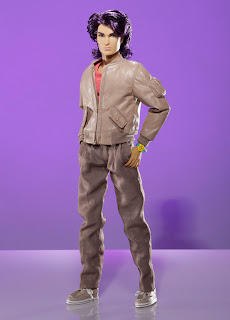 I've finally begun to unpack my dolls in earnest. Although I'm still waiting for more Ikea showcases, I can begin to fill up the ones I already have. 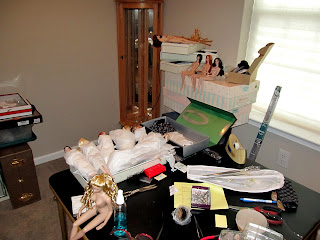 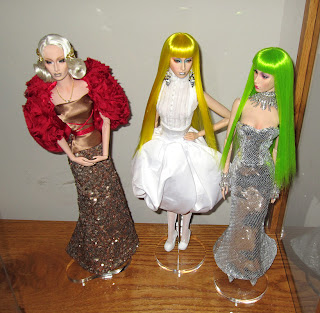 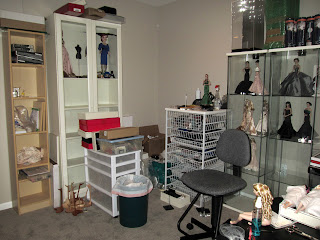 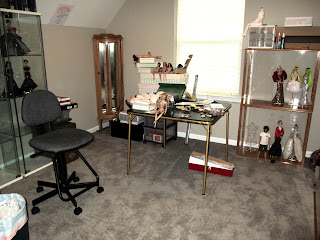 Mainly I started with my Fashion Royalty Vanessas. I have a very long road ahead of me as I did not pack all of them with their outfits on. They will need to be redressed and for that to happen I have to have all their clothes, jewelry and shoes organized so I can find it. Not easy.

What is it with us doll collectors? Is there never enough? I keep looking at this Tonner doll, Marvel's Black Cat, and I want her. I think she is just beautiful. 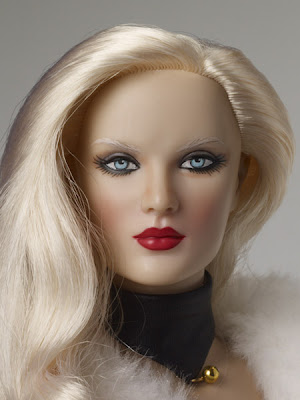 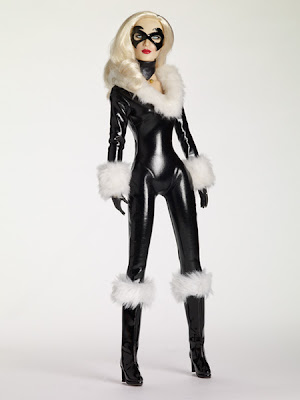 Review of the Tropicalia Dolls

I wanted to review the dolls and fashions coming out of the Tropicalia convention earlier but I hesitated because the fashions are mostly so bad that it's confusing. Out of the 8-doll Convention collection, the worst are the outfits worn by Veronique and Kyori with close runners-up Adele, Natalia and Colette.
The color combinations, style mismatching, poor fit and generally cheap-looking appearance is mystifying. While the dolls themselves are not unattractive, the clothes are. I keep hearing "Who Let the Dogs Out?"
Dasha's dress looks flimsy and poorly constructed. What a waste.

The neat little fashions on the Poppy Parkers are fine. Victoire Roux' fashions are well conceived and presented. Although I'm not sure about the roses (?) on the gown. Anja's dress is so not weird that I wonder what happened. Even the two most beautiful of dolls, Vanessa and Eugenia, had dresses that were uncomfortable looking and without any high style.
The clear winner of the event is Escapism Elise Jolie. Although her dress is a little tortured it looks interesting and I think she is stunning. The FR2 shoe pack is very nicely designed.
The Imogen gift set is so crappy I don't even want to go there. Three skimpy dresses? Red and black?
Good grief.
This had to be the lamest bunch of convention fashions ever.  Look back only a few years at the beautiful fashions and compare what came out of Orlando to what existed previously.

The names on the Saturday night dolls have been changed. Vanessa is now being called the give away doll and Imogen is the official convention doll.

One of the best looking James Dean dolls ever produced was from Mattel in 2000. It was part of the American Legend series. The outfit fit him perfectly and he had the bad boy good looks of the real James Dean. 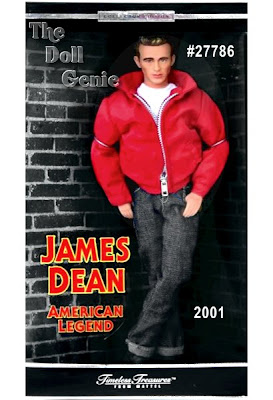 In real life he wasn't exactly the most rugged looking but he certainly didn't look like an innocent. Mattel really knocked their James Dean doll out of the park. 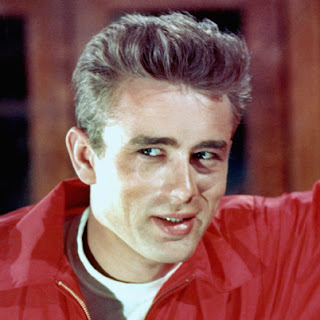 Sadly, this new doll from Tonner looks way too boyish and not nearly as tough or as good looking as the real Dean was. This is a nice doll and possibly a good base for customizers. I'm always in the market for really great looking male dolls to keep my girls company. But my girls are older than this fellow. 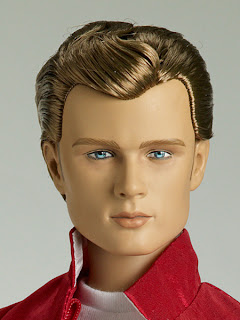 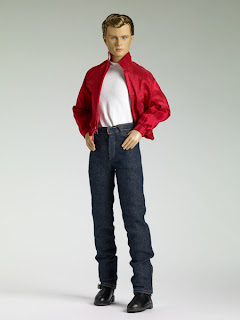 A Commercial from Our Sponsor

I am offering for sale several of the Tropicalia Convention Items. They are all listed on my Show & Sell pages. Here is the list of what is remaining at the current time as I have sold most of what I did not want to keep. Please note that if it is not listed here, I don't have it or I'm keeping it. You can find images to these items (except the chairs) in prior blog posts.

Tropicalia Imogen's 3 Dresses, Handbag, Bracelets
This offering is for the two red dresses, one black dress, red handbag and two gold metal bracelets that came with Imogen in the round giftset box. (Not included: ring and shoes.) If you would like the round giftset box in which this doll was packaged, add $25. to the total.
Price: $119. Plus Postage

OUTFIT from Vanessa Perrin Tropicalia Convention Doll
This is the gown that was provided for the Vanessa convention doll. All accessories that came with the gown (if any) will be included.
Price: $89 Plus Postage

Tropicalia Peak Season Kyori Sato
NRFB $150 NUDE $90 OUTFIT $60 I believe this is the first Kyori with a new sculpt. She has blonde hair and her outfit is just adorable.
Price: $150.

If you are interested, please email me with your zip code or country. Emails get faster response as opposed to PM's. International shipping must go via Priority Mail which is trackable. Most items will have to be insured as that protects both of us. Please note: I do not put items on hold without a substantial deposit. I do add the Paypal fee into the shipping quote. However, if you can make *t for the items and I will invoice with exact postage and Paypal fees (....) as soon as the items arrive.
Posted by Terri Gold at 10/01/2012 05:58:00 PM No comments: Links to this post

The official photos and titles of the last three dolls have been released by Integrity Toys, clearing up some confusion - I think.
Apparently, according to her title, Imogen is not the convention souvenir doll. She was the Welcome Kit Gift Set. Someone screwed that up in it's distribution as the welcome kits usually are doled out piece by piece.
Eugenia is a gorgeous doll with a less than stellar gown.
Vanessa is the convention doll. She is a new sculpt. Back to the open mouth and closer to the original than the last two incarnations which were not popular among most long time collectors. The gown was given out with the registration (welcome?) kit. Vanessa was distributed in a baggie! Who is running this show these days? Who cares. I'm glad that someone had the good sense to make a real Vanessa again and to make her the convention doll. She deserves it. That's my story and I'm sticking with it.

I'm off to attend the last function of the Jamieshow Convention in a few minutes. We're doing brunch at a gallery where George's photography is currently being featured. I'll be back in PA later today. Back to the packed dolls and showcases waiting for their empty spaces to fill up. Four more cases are on their way from Ikea. I was busy before. Now I'm going to be ridiculously occupied.