January - A Slippery Slope for Collectors

With IDEX and New York Toy Fair just around the corner, new doll lines are set to debut. Dealers and manufacturers are anxious to make room for the new products and the sales abound. Collectors are "winter cleaning" their collections and offering up some great stuff. What's a helpless collector to do?  Here's a rundown (read: admission) of my January activities so far:

FR16 Spring Kissed (nude) It hasn't arrived yet but my motivation was that I would use the body for an older Avantguard and sell this giant Poppy face.
FR2 Dominique Makeda Impossibly Beautiful. It was on sale for $50 less than the original retail. I wanted her body and outfit. Sadly, very few want her head so I will probably be stuck with it. Pictures follow.
Superfrock Testament Fashion - Second time around. I sold my first before I ever had Sybarite dolls.
Superdoll iBean sunglasses
Sybarite Blade pantsuit and miscellaneous accessories.
Superfrock Pet Carrier from Automatic
Ponytail wig from Cheryl Wood.
Two reroots and a custom jacket.
Monster High Cleo de Nile’s Vanity and a lot of Monster High Odds and Ends: Although these are adorable, I think this has cured me from buying any more MH stuff. What a waste!
W Club Memberships: We'll see. I did not order any of the upgrade dolls as I didn't care for them.
Perfectly Purple Poppy: This was a pre-order that was delayed for about 8 months.
Theatre de la Mode ROYALE #82: Another  delayed pre-order.
Tonner Deluxe Fashion Closet: A great bargain.
And then there are the dogs. Sigh. 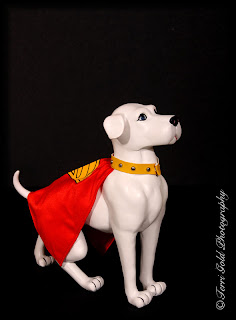 This is a Tonner product and was made to accompany his Superman figure from several years ago. Sadly he is stained from the red cape but I may have him painted eventually. Why did I buy this? I loved the original Superman comics and Krypto was such a great dog. January fever got me so Krypto moved in.
If that weren't enough... 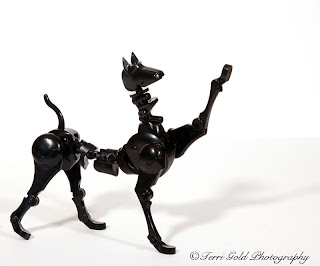 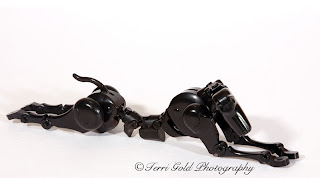 Obitsu makes these jointed dogs and in a January mindset, $25. each seemed like a good idea. I bought a white one as well but I can't find it and it's not even out of it's box. Sigh, again. 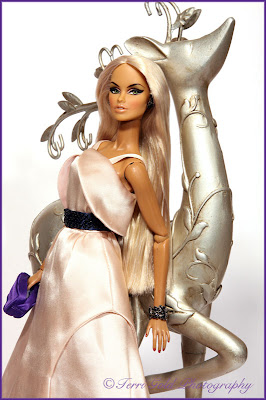 No she's not a dog. Miami Glow Vanessa was the recipient of Dominique's body and fashion. I like the gown now. There were some problems with the product, however. The beautiful silk (?) gown was stitched to the box and even with ultra careful removal, thread holes remain. I even steamed the fabric to no avail. Sad. It's really a beautifully designed and carefully constructed garment. The body itself is the first FR2 body I have received that was wobbly. There is a huge space at the thigh joint which allows the legs to swing loosely. Going backward? My temporary fix is to put tape around the joint (not inside) to hold it. The seams on this body are not finished nicely. She's got stripes on her arms and neck and probably on her legs, too, where the seams are joined.  I don't know if I will seek a replacement body.

I was ill all week and I thought I'd feel better if I deboxed something. I am a deboxer but occasionally I will get a Mattel product and put it somewhere without opening it. Too bad I was able to find this one - the Grace Kelly Trousseau. This has to be one of the least attractive of all modern Mattel sculpts. Not only is it unattractive, they forgot the matte finish.
The second outfit is a very nice navy sheath. Unfortunately the coat is not made properly. The empire seam which should be under the bust, hits almost at the largest part of the but. It was cut too short for a silkstone body. There is a big white hat but it never made it into the pictures. It's probably hiding with the white Obitsu dog somewhere. 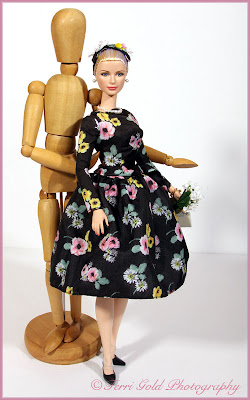 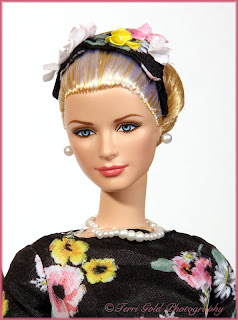 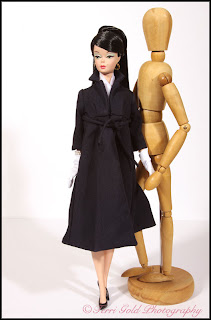 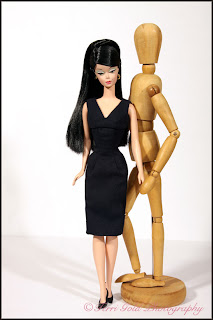 Needless to say, deboxing this set did not make me feel better.

Did you all have a good January (so far?)

Wilde Imagination has announced the arrival of Ellowyne's new friend, Lizette. There is one basic doll and two dressed dolls. 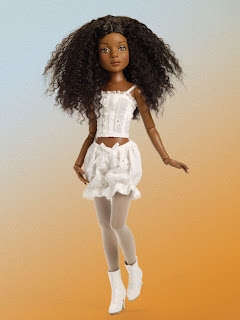 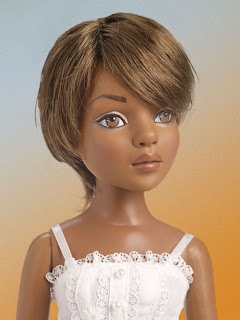 The basic is a wigged doll, Essential Lizette, and sure to be very popular.  I like the wild wig look much better than the smooth one. It gives her character and works perfectly with her skin color. She's adorable! She is $119. and WI is offering free shipping until midnight January 31st. 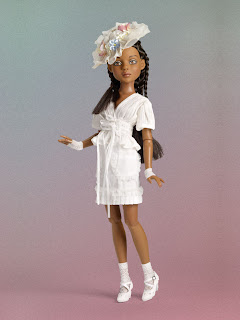 This dressed doll is called A New Girl in Town. I like her hairstyle which is rooted. The rest of the outfit is odd and looks like something a waitress or a volunteer nurse would wear. Part of her back story is Lizette collects hats. 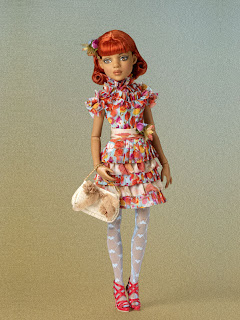 "Pretty Little Lizette" is shown here and I love her outfit! She is wigged (removable) and that's a good thing because I don't think this wig works for her at all. Both dressed dolls are $149.

I would love to see Lizette's ethnicity fully embraced with frizzy hair and all. I hope I'm not being politically incorrect but this is a dark skinned doll. She has AA features and I'd enjoy seeing WI run with that. 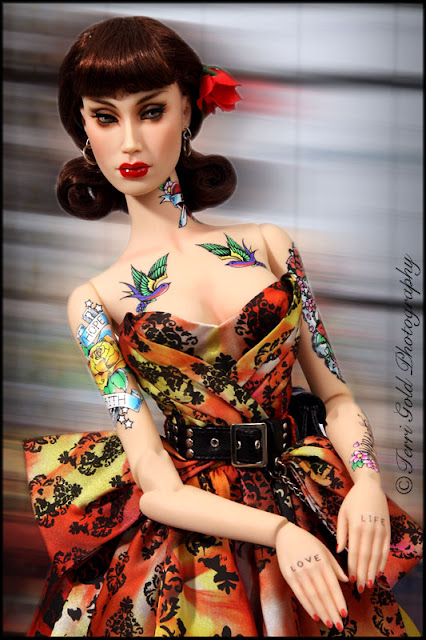 I love the way this Photoshop effect drags the color out of what ever it's edge touches. Toxica's tattoos visible in this photo say Hope, Faith, Love and Life. I need some hands for these gals that have more expression. Happily that is my only issue with my Sybarite dolls. Some of the ultra exclusive dolls come with hand sets.

The men looked gorgeous in their tuxedos. Leonardo looks good to me no matter what.
For the ladies there were too many over-designed gowns. More is not better; it's just more. So many were sprouting out of feathers, flourishes and tiers of manipulated fabric.

Of the 90 or so images I looked at, these were my female favorites:
Not quite decided about these but they did have a unique appeal to me.
Simple bodice with a fascinating bottom of painterly quality. (Perhaps feathers?)
Bird, reptile, fish or Cirque costume? All she needs is an appropriate snake headdress.
A category of her own. Picture Tilda without the face and the jacket.
The worst:
This looks like a chenille bedspread. Poor thing. She looks overwhelmed.
We're off to see the Wizard. This gown's beautiful silhouette deserved better color treatment. She looks like the Jolly Green Giant.
I have no words for this laser-cut greeting card parading as a dress.
My Mother's Baby-Blue Sequined Portieres (left side.) The beadwork is gorgeous but the zipper is so noticeable and for some reason it looks as if she didn't have time to finish getting dressed. She needs a clutch and something else...perhaps a touch-up for her roots?


This has been way too much fun.