This is definitely a change for me. Couture Noir is 22" tall! She's a big girl. When I carry her it brings me back to the feeling of carrying a doll when I was a child. I like it.
She was my Mothers' Day gift from my dh.
She came in a huge box, inside another box inside her Madame Alexander box. I didn't expect to see CN wearing her alternate wig because the promotional photos show her in her red feather wig. She looks softer and friendlier than the promo photos. In addition to a second wig she also comes with a mini skirt. The neckpiece was a trial of my patience to get on properly.
The only complaint I have about the construction of the doll is that the heels of the boots are too high. Perhaps they're making them in the same factory as the boots belonging to the Fashion Royalty dolls. She cannot stand flat on the sole of the boot. I really hate that. I also noticed something else odd. Her right eye socket seems larger than the left. I think it shows up in the photos. 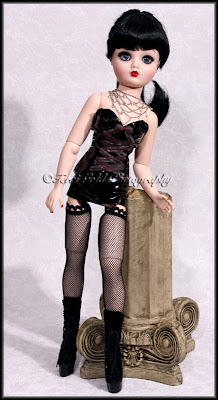 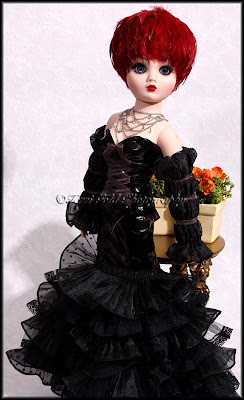 The dealer posted on the site that the doll might possibly be stained. She has some staining on her scalp from the wig and around the tops of her thighs from her stockings. These stains don't intefere with the doll's appearance at all but they might lower the resale value ultimately. I'm not going to worry about that at this time.
The coolest thing is that the red wig is actually feathers! The patent leather looking fabric is a very flexible vinyl with a nice feel. I am very pleased with the fashion.
Now all I have to do is figure out how I am going to display her because she is too large for any of my showcases.
Posted by Terri Gold at 5/01/2009 10:32:00 PM No comments: Links to this post

Members of the W Club received this information on April 28, 2009 along with a link to enter the lottery.
We are excited to announce to the W Club before anyone else that Jason Wu has designed the Official 2009 Life Ball doll! Created specifically to benefit the 2009 Life Ball, this gorgeous collectible marks the debut of Integrity Toys' new FR Monogram™ collection. An extension of the Fashion Royalty collectible line, the FR Monogram collection features a new custom face sculpt (body is the same size as the Nu.Face body), as well as the hallmark of Fashion Royalty- miniaturized couture fashion with impeccable attention to detail....The 2009 Life Ball Doll wears a replica of a chic evening gown from Jason's romantic Fall 2008 women's fashion collection. The gown is constructed from custom-printed fabric in a floral pattern that has been realized in perfect miniature. For information about Lifeball, click here. http://www.lifeball.org/lifeball/show_content.php?hid=21&language=en

The doll is an ultra-limited edition, with only 250 dolls produced worldwide, and will retail for $270 (plus shipping and any taxes). 100% of the net proceeds from the sales of the doll will be donated to Life Ball to support HIV and AIDS treatment, research and prevention. 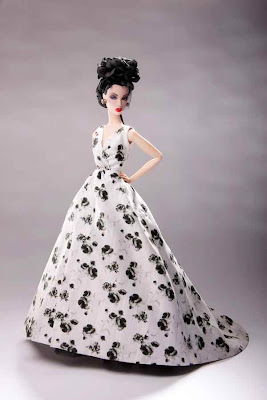 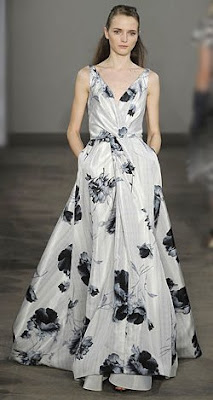 Above is the original runway version of the dress created by Jason for his Fall 2008 show.


This is obviously a great cause and I urge all to support the funding of HIV/AIDS charitable organizations.
What's this about a new line from Jason with miniaturized couture fashion? I thought that's what we were getting until this season. Has Jason, as I feared, 'abandoned' creating for the standard Fashion Royalty line?
Or, has he just turned over permission to his staff to use his designs on a more expensive version of Fashion Royalty? Why the switch to the flat-chested body? Will we also have dolls who look like the model above without makeup and without any discernable hair styling? If he's going couture why not go all the way?
Before I go further I want to add that I did enter the lottery and hope I win the opportunity to spend my money for a good cause. I wonder how much of the purchase price will be the net proceeds donated to the foundation. Hopefully it will be at least $200 per doll. When you think about it, donating net profits isn't exactly philanthropic. Simply, net profit is the money left over after paying all the expenses of an endeavor.
Net proceeds is something else and usually refers to securities, real estate and similar and is defined as
"the amount received after all costs are deducted from the sale of a piece of property or security."
Maybe they are the same thing. I don't know.

The doll looks pretty. She has the same coloring as Fine Jewel Eugenia with the raven hair and bright red lips.
I'm not quite sure how her hair is styled but it appears to be in a nice updo. I wish the dress would have been created in a fabric with similar drape to that of the original. It's Barbie-esque with it's stand-out shape. Spectacular, Spectacular Eugenia's dress had the same issue. 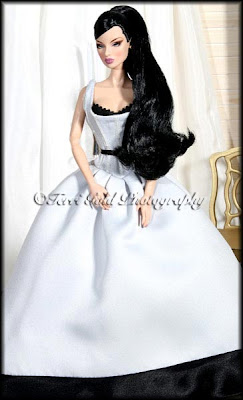 Jason has used lovely fabrics in the past for dresses that flowed. For example, Shape Shifter Natalia and Miami Glow Vanessa have gowns whose fabric is soft, clingy and drapey. 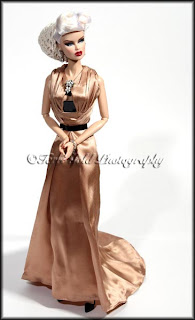 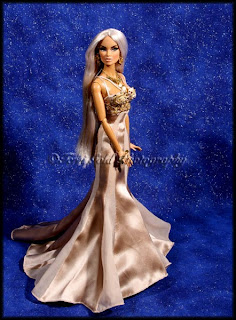 I hope to see better re-creations of Jason's designs using finer fabrics that emulate the original more closely.
My collection has grown to the point that I'm after quality not quantity.

Here are two shots from Goldmine's latest photo session. She looks fabulous in the photos but I have to say that she looks even more beautiful in person. This has to be my most beautiful doll (this month anyway.)
She is wearing an Ashton Drake Gene outfit called "Will You Marry Me?" The shoes are from another set.
I'm thrilled that the AvantGuard dolls can wear and look fabulous in most of Gene's fashions, old and new. The period dresses sometimes look a little dowdy but the rest are very flattering. 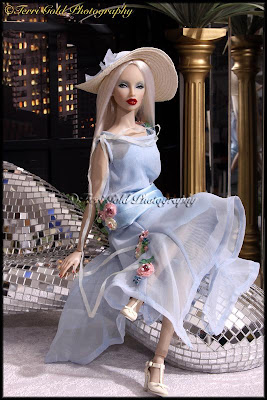 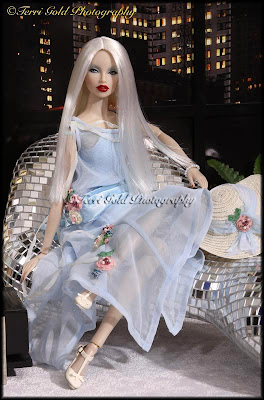 This week's award goes to Jurrie de Vries of the Netherlands whose photo of Oona in a Metrodolls exclusive fashion called "Critic's Choice" is reminiscent of the models of the 40's and 50's. The hat is from Gene's "Little Black Dress" costume. 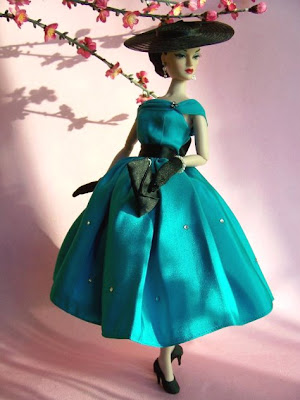 Jurrie always posts beautifully posed and artistically lit portraits of the Gene line of dolls. Visit I.C.O.G. and the Studio Commissary to find more of his work.
Posted by Terri Gold at 4/27/2009 12:05:00 AM No comments: Links to this post