I Don't Believe It

A Style Mantra Eden just sold on eBay for $1,026. The winner has a feedback score of 15. There were 35 bids from 19 people. Seriously? Why would someone pay so much for this doll? I know she's popular but come on.

Do you think they will debox her? 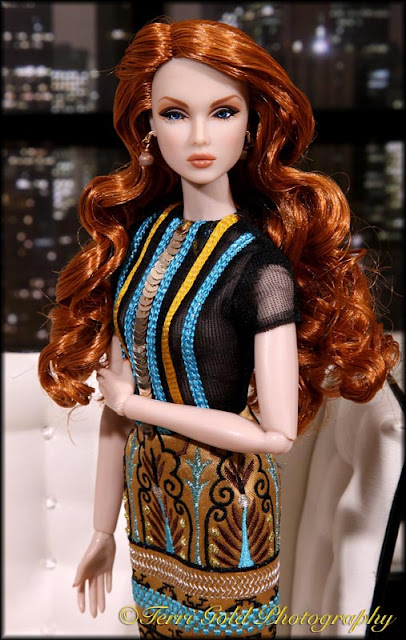 I did a double-take while browsing the Ellowyne Wilde catalog earlier. Listed in among the Basic Dolls was a doll called Candlelight Rufus Basic. He looked so much like another Tonner doll - at first.
Put your finger over the face and who do you see? I saw Jeremy Voss for an instant. Too bad Rufus is so weird-looking. I wish Jeremy would make a comeback. I need one with black hair. 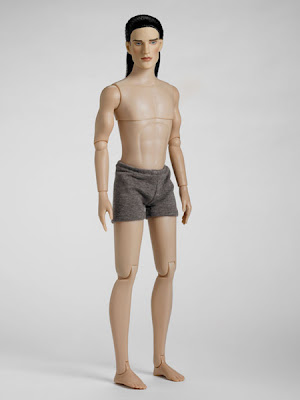 It looks like the same body except for the neck. What do you think?

I wonder if this Rufus outfit would fit the Matt/Jeremy body? I like this outfit called "Totally Natural."
It  vaguely reminds me of something Rex Harrison wore in My Fair Lady. 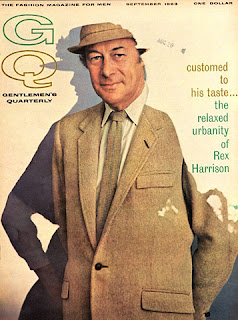 The Mattel version is kind of cute, too. 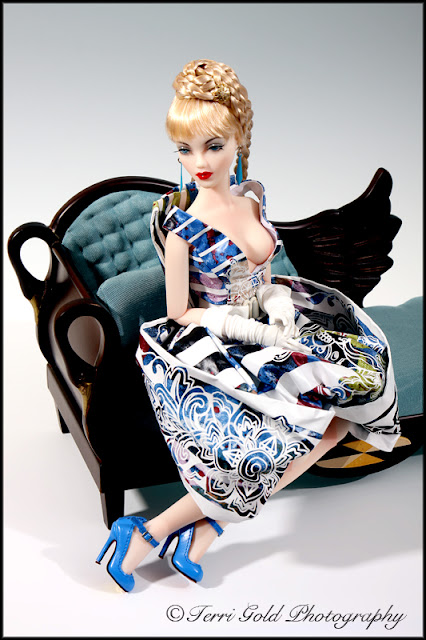 I'm definitely enjoying photographing the new resin Gene doll. It reminds me of the days when I'd get one doll at a time and spend a week changing her clothes and taking pictures. I haven't done this in a long time.
In the images on this page, Phoenix is wearing Sybarite Neurotica's dress. It fits
very nicely except the straps of the dress are extending above the natural shoulder. I like it anyway.  The shoes fit, too, but because Gene's ankles do not bend the shoe's angle, when she is standing up, is off. The wig is by Cheryl Wood. She's wearing her own gloves smooshed down and folded over.
This doll looks great in everything! 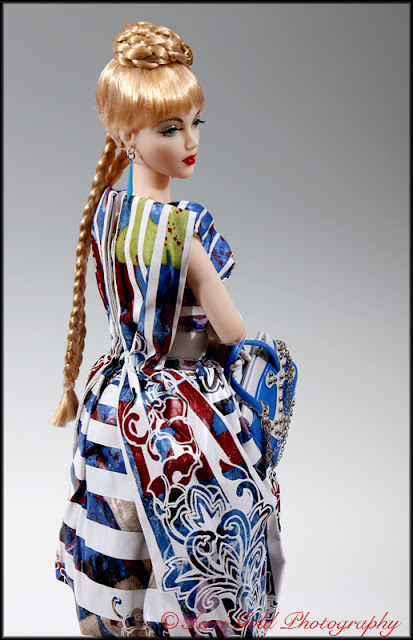 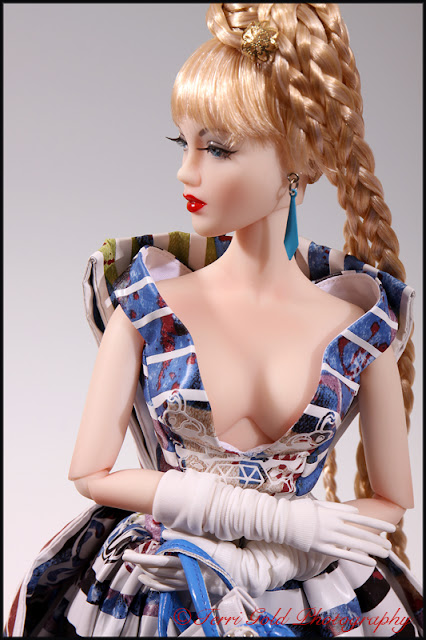 Above you can see the detail of her glove hands. This is the set of hands that is painted white. They were easy to switch to the regular color hands without tools but did require a third hand. In my case I held the doll between my legs and switched the hands. You can see the other hands in prior photos I posted of Phoenix.
__________________

Tom in CA has graciously allowed me to reproduce his Gene comparison photos.
First we have blonde versions of all three Gene Marshall dolls. On the left is an Ashton Drake, center is Integrity Toys and right is the new Phoenix.  Do you have a favorite?
In this particular picture, I like the IT version primarily because of the hairstyle which makes her forehead smaller than either of the others. 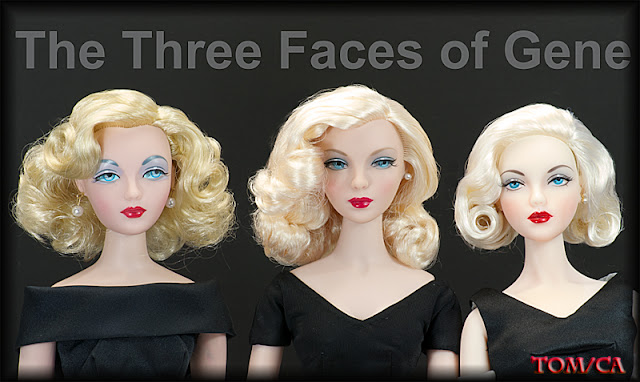 Here is another comparison which is great because it shows the head shape differences. Phoenix has a much more realistically proportioned head.  The Gene on the left looks as if she's missing part of her skull! 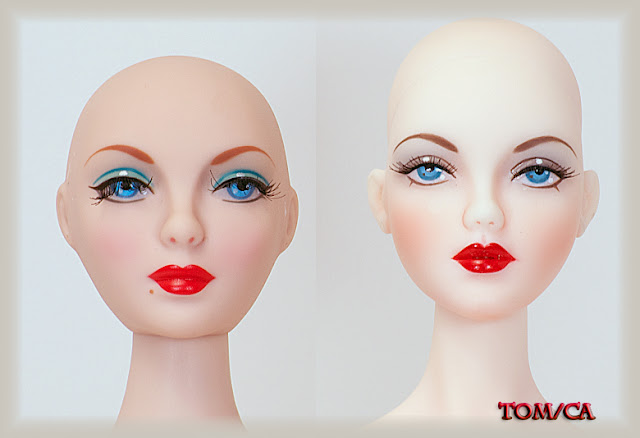 A new Gone With The Wind Scarlett is being previewed by the Tonner Doll Company.   She is a 22" "Scarlett's Wedding Day." The gown looks lovely— it had better be because the retail price of this beauty is $399.99. 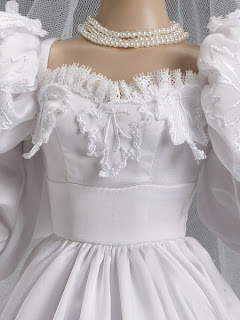 According to the description this doll has a "new Vivien Leigh portrait sculpt."  Hmmmm. She has a pretty face but I don't see the resemblance to Vivien Leigh as Scarlett O'Hara at all. 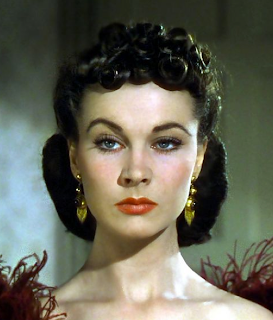 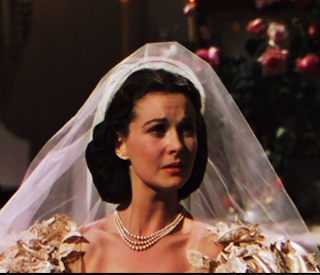 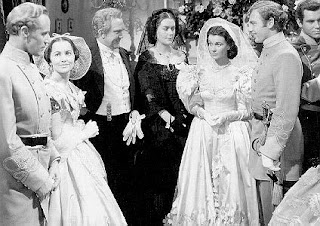 All photos except the last three are the property of the Tonner Doll Company.  The other three are owned by MGM.

Despite the fact it's been 72 years since Scarlett O'Hara first pulled down a green curtain to make herself a dress in "Gone With the Wind," that outfit has remained one of the most iconic looks in cinematic history. It's going to stay that way for many more years, too, as that dress and the burgundy ball gown from the 1939 film have been restored by the Harry Ransom Center at the University of Texas.The Center has been part of a $30,000 conservation effort to protect the two costumes from deteriorating. Now both of the dresses, which were famously worn by Vivien Leigh in "Gone With the Wind," are on display at London's Victoria and Albert Museum. This is the first time the public has been able to see them in nearly 30 years.After first being announced in 2010, the team at the Ransom Center set to work on making sure that the weak stitching and other problems with the dresses were repaired. The goal of the conservation was to make the costumes last, not return them to new conditions, so there still are stains and other imperfections. Other pieces, like Scarlett's wedding dress and veil and her blue velvet night gown, were too fragile to be repaired and are being returned to storage with no plans to work on them in the future."All of those areas would have gotten worse. All the vulnerable parts have been stabilized," Jill Morena, the Ransom Center's assistant curator for costumes and personal effects, tells the Associated Press. "It has been a success. We would not be able to display them without this effort."The Harry Ransom Center first acquired the outfits in the 1980s. Following their time at the Victoria and Albert Museum exhibit, which runs through Jan. 27, the two "Gone With the Wind" dresses will be shown at the Center's 75th anniversary celebration of the film in 2014.

Tiny Kitty To Make A Comeback

I forgot to mention that Robert Tonner announced the return of Tiny Kitty at the IDEX breakfast last week. They showed the line but it was a slide show so I didn't get to see enough. I thought the dolls looked more like Simone Rouge than Tiny Kitty. Simone is less innocent looking.
The bodies will be the same...boo hoo. I would have liked if they could sit without their knees spreading apart. In any event, I am pleased that there will be some new Tiny Kitty dolls to join my collection.

This is a really old photo. My first Tyler and possibly one of my first Tiny Kitty dolls. 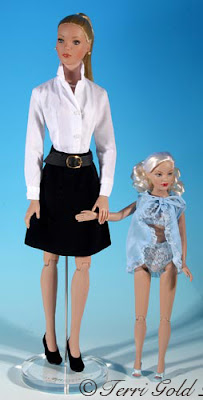 One of my favorites, "Little Miss Kitty."

I love the blonde TKs. 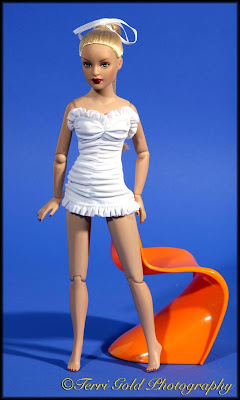 Tiny Kitty loves to wear Fashion Royalty clothes! The shoes do not fit (the boots do) and the bust is a different proportion but many of the multi-piece outfits from the 2nd generation FR work well. 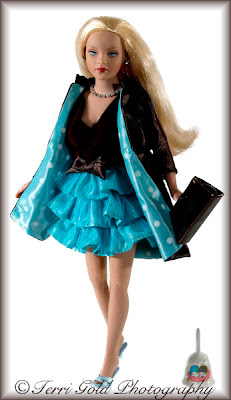 This is a picture of Simone wearing a Madame Alexander Cissette (or Coquette) fashion. 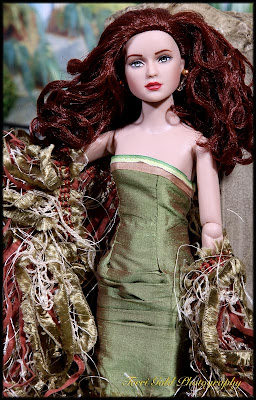 My girls get along with each other. The big ones look after the small ones. Antoinette and Simone. 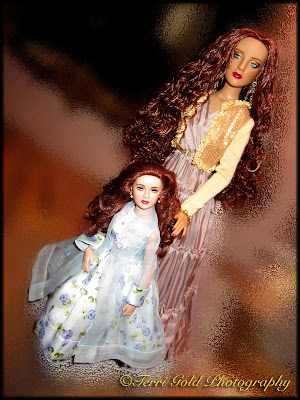 Phoenix is quite photogenic. She is pretty and her resin glows.
More good news, she can wear most Tyler sized fashions and shoes.
The wig she is wearing in these shots is a fantasy style of mixed platinum, opalescent, pink and a slight metallic. It was made by Fetique Clinique. 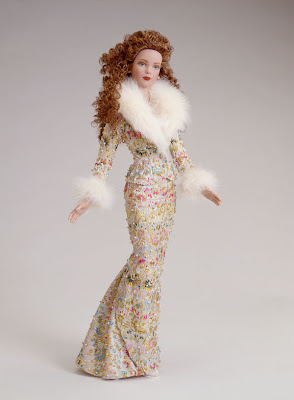 The fashion is by Robert Tonner and is called Florentine. It was a 2002 dressed doll and is one of my favorite Tonner fashions-ever. 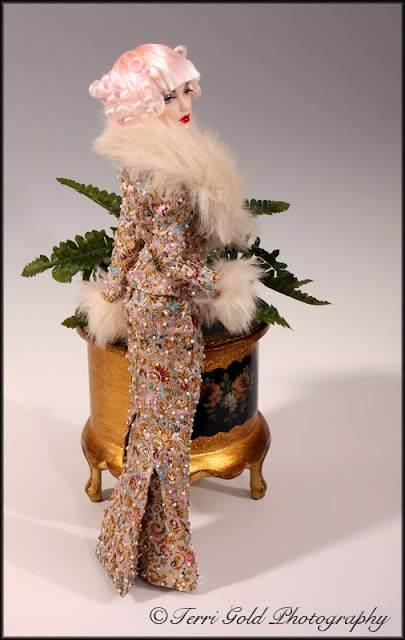 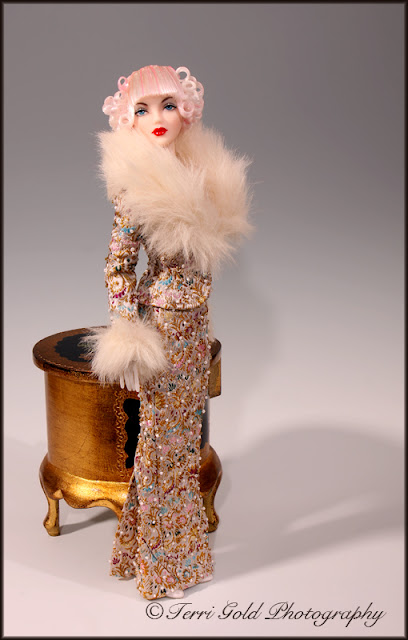