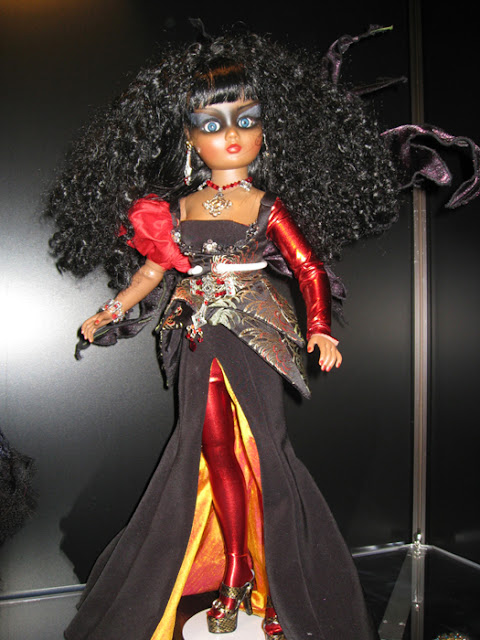 Here is one of the new Cissy dolls from the 2010 Madame Alexander line. What is up with the terrifying-looking dolls this year? Is it a reaction to the economy and the weather or what? The gown is gorgeous. The stockings and shoes are to-die-for. But the face and the hair. OMG. This is the stuff nightmares are made of.
The names of three of them are laden with emotional overtones. Lust is one and sorry I don't remember the others but I will fill in the blanks later today.
From what I've been reading on the internet, the reaction to these dolls is very bad. It's another "What Were They Thinking?" event.
Posted by Terri Gold at 1/30/2010 09:04:00 AM 11 comments:

There's nothing new here, no unique design or hair style. She's little Miss Mary Tyler Moore.
Each color will be available in a quantity of 100 as follows:
Gigi's Dolls and Sherry's Teddy Bears-Blonde/lavender: 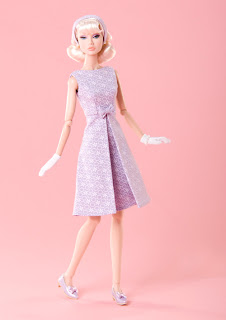 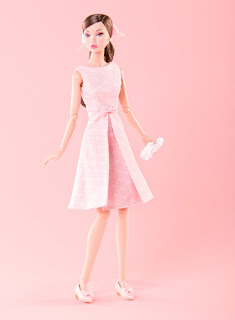 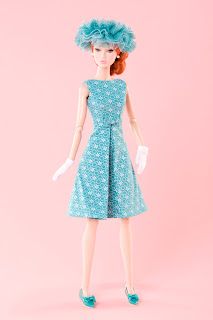 Price for each doll in Integrity's Forget Me Not collection is $80.

What Were They Thinking? Part II 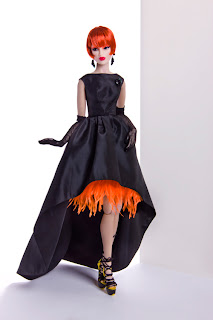 I let this image sink in for two days before I wrote this post. When I first received the email containing the pictures of this new Avant Guard doll, Hot Trot, I thought of the Inferno Vita doll with her fire orange streaked hair and black eyes. The more I looked at this doll, the worse she gets. I've said it before, these dolls have ugly knees. The shape of this gown accentuates her knees. It's just awful. I might like it better if the hem were the length of the front of the gown and even all around. It's an awkward, unbalanced design and it's not pretty. What happened to pretty? What's going on with the ties on the shoes? What is hidden behind the front leg? 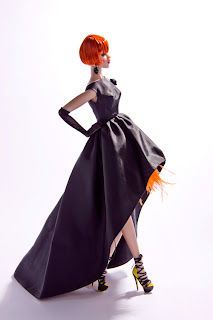 The other 2010 Avant Guard doll is called On Edge. She has the Goldmine sculpt which I like better than the closed mouth. I like the short black wig and I think she is very pretty. The feather cape is ... well I can't find the words. The bust of the dress looks like it doesn't fit properly but that could be the photo. The shoes are the same ones that came in the accessory set from last month! So it's just another AG with bright blue eyeshadow and red lips. I like the gloves if that makes a difference. 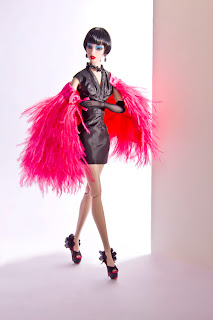 These dolls could have been called Feathers, Over and Under. Whatever. I will probably put my money somewhere else. 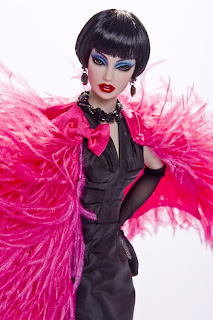 If Barbie Dolls Were Articulated...

...would Mattel charge $150 for a doll like December Turquoise? 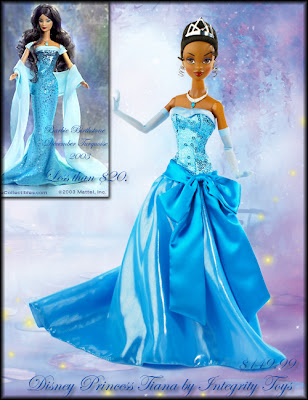 One year ago, Mattel introduced their Princess and the Frog doll. 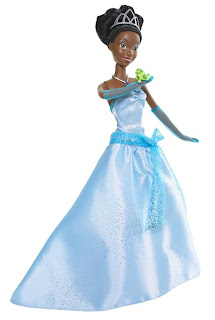 Here are images from the Disney cartoon. 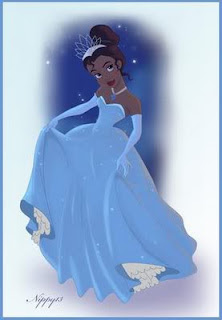 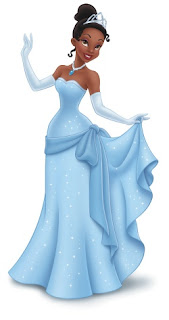 Integrity's interpretation of Tiana is very nice. She is a pretty doll. This version and another are going to be sold through Ashton-Drake Galleries only. The price is $149.99 and an edition size is not listed.
Posted by Terri Gold at 1/28/2010 05:57:00 PM 3 comments:

Up first is "Inferno." Since when do black circles around the eyes and the fiery orange streaks in the hair qualify as design? 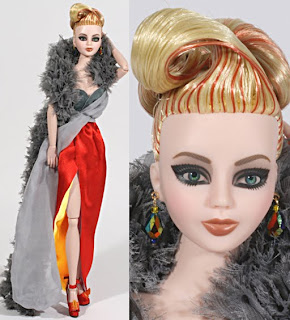 It looks like a child got a hold of a black Sharpie pen and traced around her eyes. The gray shredded thing around her shoulders looks like it came out of a trash bin. The gown is literally ugly. This doll should not have been let out of the gate.

The other offerings of Urban Vita dolls for 2010 aren't much better. I get the overall impression of a confused designer who doesn't know what direction in which to take these dolls. 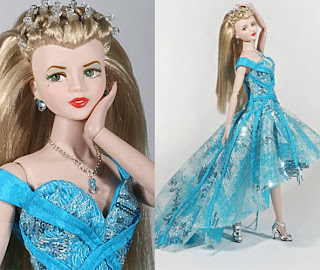 This doll's face was peeled from a cartoon page. I do like her hair even though it was done with a heavy hand.

Then there's Breeze. She appears to be in a trance-like state with her partially closed lids and requisite toussled white hair. The outfit and the face do not work together. One would think 'angelic' until one sees the silver hot pants and tall boots. Oy. 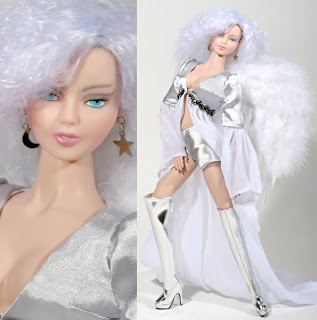 Finally, Terra, the best of the four but the strange face remains. 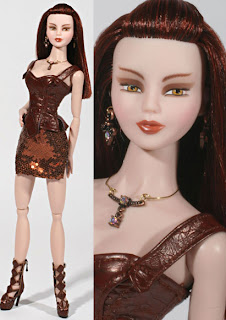 I'm hoping to be able to actually see and handle one in person at IDEX in a few days.
Will you pay $160. for one?

PS
The manufacturer ought to hire a professional photographer while they're at it. The lighting is amateurish and makes the dolls look even worse.
Posted by Terri Gold at 1/25/2010 10:21:00 AM 18 comments:

My son was married on Saturday to a wonderful woman. We are extremely happy. I did not have the time to choose a Picture of the Week for this week. Next Sunday I will have attended IDEX so there may not be a winner for two weeks in a row. But, there will be plenty of words and pictures. Stay tuned, dear readers!
Posted by Terri Gold at 1/24/2010 05:08:00 PM 2 comments: