A Day of Ennui with Robert Tonner and Ellowyne...sigh.

Today I attended a luncheon at the Wiltwyck Country Club which is only 13 miles from my home. I love that I live so close to the Tonner hub. Who knew when I moved to Woodstock that I would be collecting dolls? It's really a big coincidence...or is it?
Anyway...it was fun. Everyone looked great. There were the usual fantastic raffle prizes none of which came home with me. I consider the cost of my 80 tickets a donation. There were competition dolls and all of them looked like winners to me.
Upon arrival we were greeted with a cute canvas tote inside of  which was an Ellowyne item of clothing or outfit, a book of Ellowyne poetry, some postcards and a catalog.
There was a big bowl of lovely mood rings at the registration table. Mine didn't change color until I put it inside my bra for a while. Hey, a table full of women usually gets a little raunchy.
Dessert was good and I would have been happy to have eaten just that. It was a big scoop of vanilla ice cream on a puff pastry shell drizzled with either chocolate sauce or strawberry sauce. And then the server brought a trough of whipped cream to the table. Heaven. I love whipped cream.
The centerpiece was Prudence:

The event souvenir was Ellowyne "A Day of Ennui" (of course): 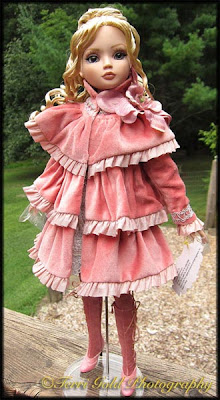 The companion doll was Amber, "No Ennui, Just Me!" I didn't even know this character existed! I love her snooty face. 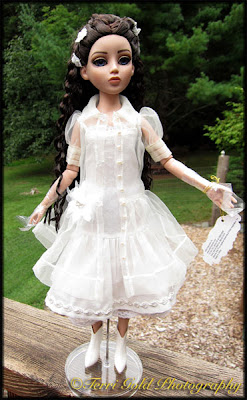 All the dolls have inset eyes and applied lashes. I think that makes them even more special. The additional dolls were $150. plus NYS tax which is 8%, give or take a fraction, bringing the total to $162.
After the event those who wished to purchase additional dolls did just that. There were plenty of dolls to buy. I'm guessing the extras will be offered through the Tonner Store so if you are interested, keep an eye out for announcements at the Tonner Direct website.
We were invited back to the store after lunch to have dolls signed and to spend more money. Everything in the store (except event dolls) was available to us for 20% off the current price. Dealers do not carry Wilde Imagination products so there is no discount unless they go on sale directly from WI.  I made up my mind before I left the luncheon that I would buy the Wilde Rose Vanity and Stool I have been eyeing for two years.
Yes, I had controlled that impulse for so long (while ignoring others and letting them run rampant.) But I broke down and ordered it. After all it was a bargain at 20% off.  I wanted it-emphasis on the word wanted.
Do you notice how effectively I have stopped buying dolls larger than 12 inches tall? Now that I have Ellowyne dolls again, they need a little furniture, right?
Posted by Terri Gold at 8/21/2010 10:41:00 PM 4 comments: Links to this post

Fashion Night Out at Bergdorf Goodman accompanied by a Jason Wu doll!

It won't go on sale until Friday, September 10 but the W Club and Bergdorf's has released the information and pictures of a new doll inspired by Jason's Resort Collection. 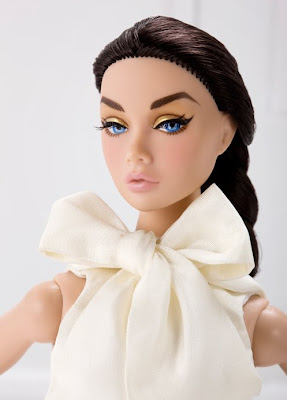 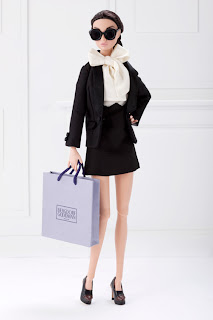 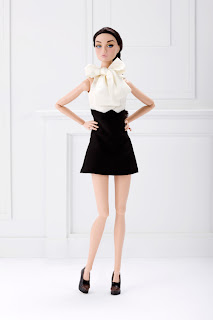 The price of the doll is $150. Will you be ordering one or more?

Today Maddies Dolls (Canada) announced a sale on Gene Marshall, Fashion Royalty, Avantguard and some Mattel dolls. The  Avantguard doll, "No Exaggeration" is on sale for $140.  Is anyone else gagging?  It seems that everyone is trying to dump the last three Avantguard dolls. Perhaps the next release will take into consideration the desires of collectors. That would be nice.
I say 'disturbingly low' only because I paid full retail for some of these dolls and it wasn't even that long ago.
I'm used to this happening with Tonner dolls but not with Integrity dolls. Ugh.
It also seems that the ITBE line is so unpopular, they can barely give them away. That's what happens when you call an inexpensive doll an "entry level collectible." My Monster High dolls, at retail, cost less and come with cute accessories and trendy/funky clothes.
Here is the link for Maddies Dolls. They do ship internationally.
Posted by Terri Gold at 8/19/2010 04:18:00 PM 3 comments: Links to this post

Added on August 18th:
There are other items on sale, too. But as Uriah commented below, none of us was notified by email or announcement that there was going to be a sale. I think they're afraid we'll crash the server - we've done it. Hehe. More power to the collectors!
Posted by Terri Gold at 8/17/2010 08:33:00 AM 7 comments: Links to this post

I came upon this stunning photograph of the new Mini Avantguard doll Androgyny on the W Club board.
Al's photography is  a favorite of mine. He's a master of composition. You will come across his posts not only on the W board but also on Doll Divas and BC.Com.
Here are the answers Al sent to my questionnaire:
-This gorgeous doll is the Mini-Clone Androgyny AvantGuards with her original wig
-No changes were made to the doll itself, but I did release the wig's ponytail
-She is wearing the Barbie by Jonathan Adler dress; corset and stockings from Aerodynamic Vanessa; shoes from last year's W Club Eugenia; jewelry from Flight Pattern Kyori
-The Hows:
-My inspiration for this shot was some behind the scenes footage of model Gisele Bundchen during a photo shoot.
-The biggest suggestion I would give to budding photographers is to get acquainted with Photoshop.  It can transform a dull, lifeless photo into a brilliant, high contrast eye-catcher. It is also indispensible when it comes to white balancing your photos if your camera can't do it properly.  I see so many beautiful photos that have been unintentionally marred by green or yellow color casts.
__________
Thanks for sharing your expertise with us, Al.