If you're on the Tonner Doll mailing list, you are used to the constant barrage of sales week after week. It seems to me that the prices don't really move much. Today I thought I'd give it a glance and IMO there are two excellent deals .

This is "Classical." She is a 16" doll with the Tyler head sculpt in a cameo skin tone. She comes with changeable feet - ballerina and high heel. That makes her incredibly useful. Any dressed Tyler doll for $50. is a great deal because the Tyler BW replacement bodies themselves go for $39 apiece.
http://www.tonnerdoll.com/ballet/classical-special-pricing 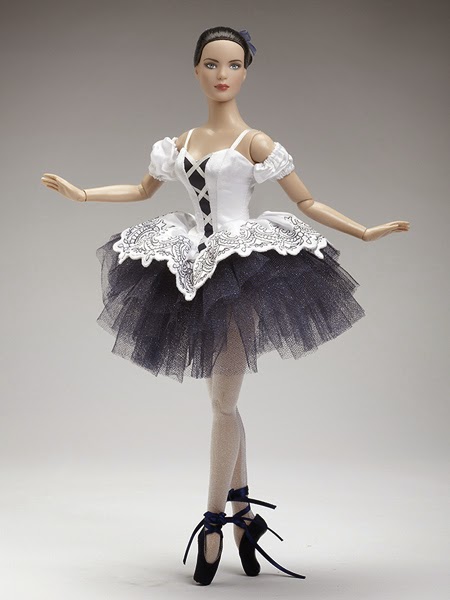 I never collected Tonner's Ballet series. although I've loved most every one of them.  I don't see them as 'play-with-me' dolls. I visualize them being displayed on a stage, permanently doing their ballerina thing.


The next is a doll that I purchased when she first went on sale a long time ago. The price I paid was way higher than the current $75.00 which is incredibly ridiculous considering that she was first offered for $229.99.  Is there a lesson here on the markup of these dolls?

This is "Glamorous #75" from the Theatre De La Mode collection.
Sadly the photograph is awful and does her no justice which may be a contributing factor to her unpopularity.
This Gina is a beautiful doll using the Antoinette body.  The dress is lovely. The shoes do nothing for the fashion but are useful never-the-less. It's a very good buy!
http://www.tonnerdoll.com/theatre-de-la-mode/glamorous-75-special-pricing 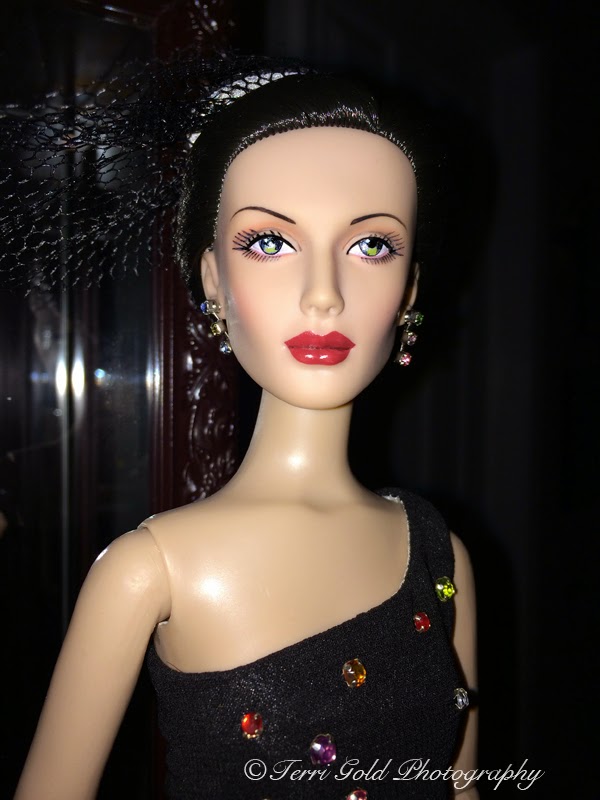 On another topic...
Poor Tiny Kitty. They can't seem to get rid of her this time around. No wonder. The outfits were designed with such a heavy hand it looks as though they were meant for a larger doll. It also looks as though they've made her head bigger.
If you're going to bring back a popular doll, why would you enlarge her head? It's not cuter. It doesn't fit. And what's with the strange lower lashes? 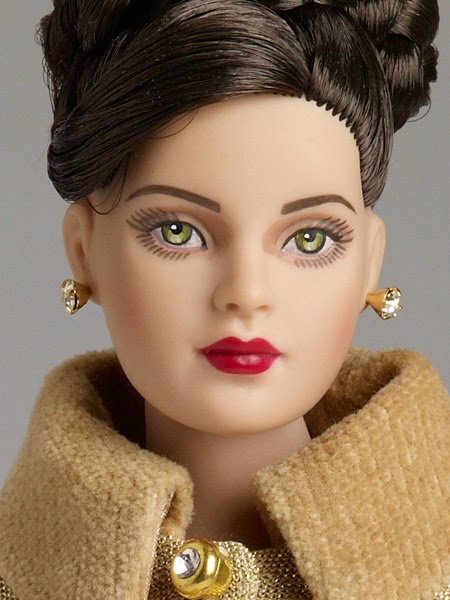 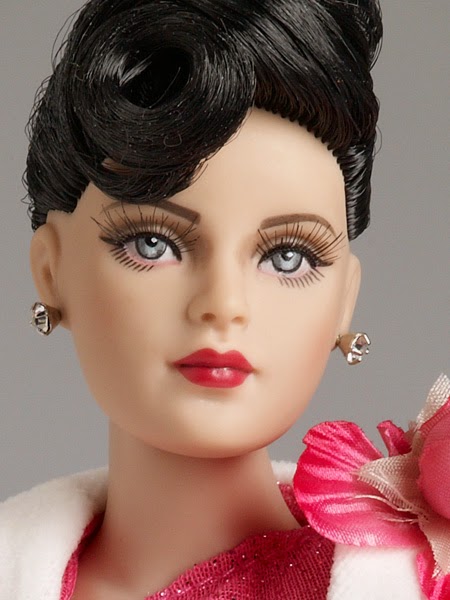 This has to be one of the worst outfits and hairstyles ever: 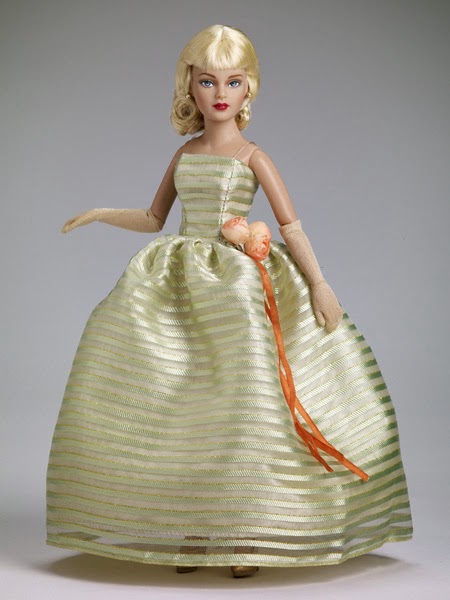 Most collectors do not want glitter covered dresses: 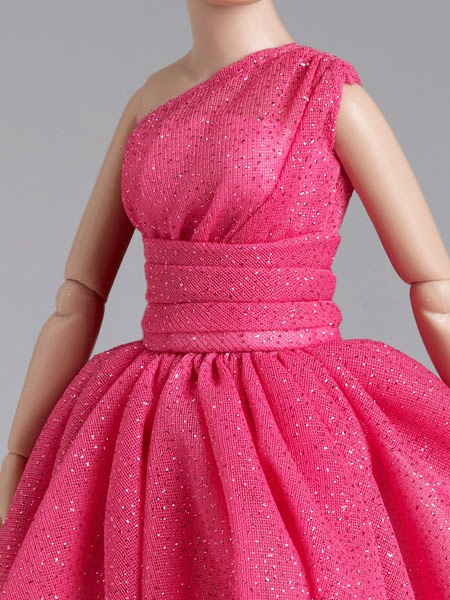 Sweet little Kitty of the past has flown the coop. 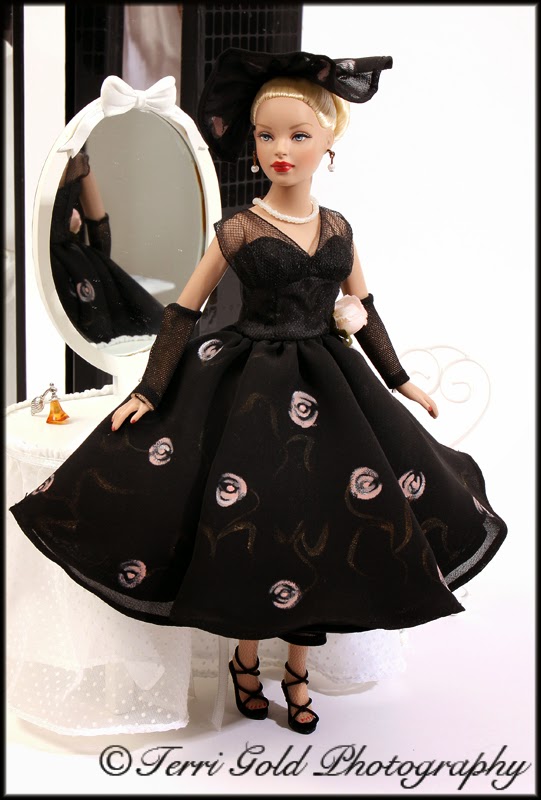 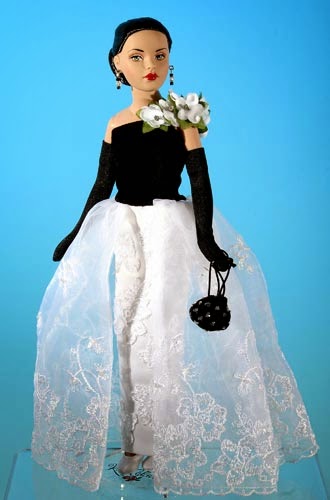 Has another company you collect ever brought back a doll with changes that you don't like?
Posted by Terri Gold at 3/06/2015 02:32:00 PM 9 comments: Links to this post

Collector Photos of the Jamieshow Trent

Here are a few photos from collectors who are enjoying their new Jamieshow Trent doll. They're all from the talented members of the Studio Commissary board.

Looking back at last year's posts, I see that I wished to have a Sad Sally. My wish came true when Wilde Imagination had a really great sale at the end of January, 2015.

She is called "Who Did My Hair." She is standing in the window seat of the AG parlor. 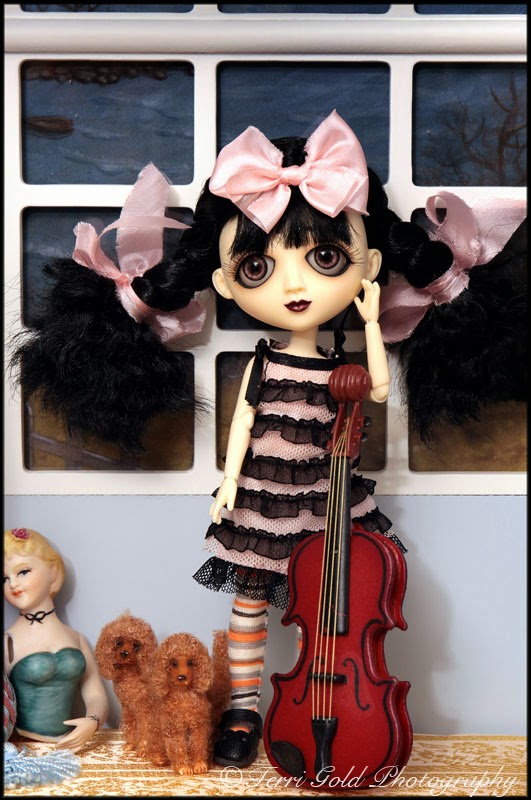 She is adorable and I love this little 7" resin BJD. She loves the Rudettes and they are her new best friends.

She poses below in a hand-knitted Lati White sweater I bought on Etsy and a crazy, multi-colored wig from Facets by Marcia. The wig's bangs had to be trimmed. 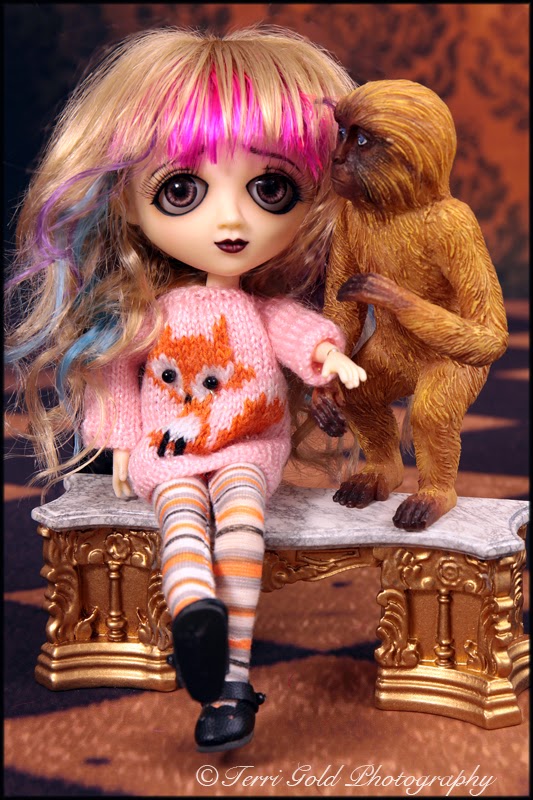 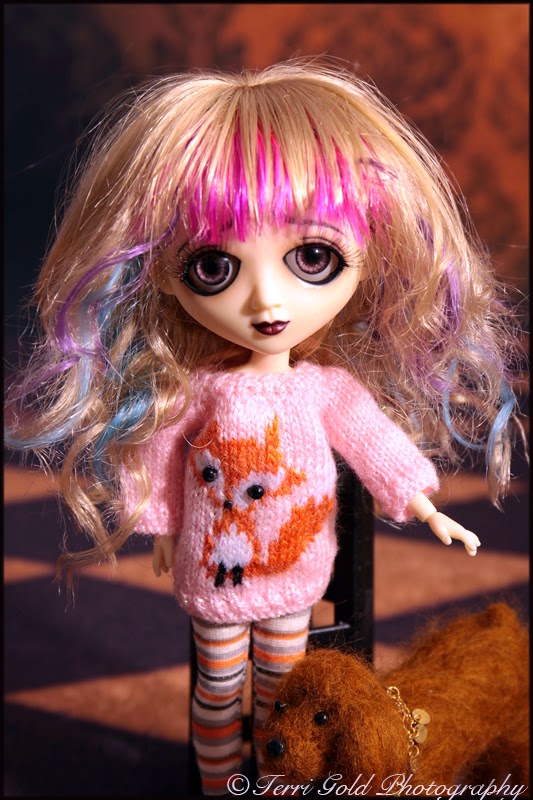 The posing isn't great, neither is it terrible. She could use wiring.

Gene collectors rejoiced when Jamieshow Doll announced a resin version of Trent Osborn, a fictional mid-20th Century movie star and the one and only male doll in the Gene Marshall line. The last new Trent dolls were offered at the final Gene Convention held by Integrity Toys in Philadelphia in 2010. All the dolls were identical in sculpt and body to Mel's original Trent which was produced by Ashton-Drake.


Backstory From Ashton Drake Publicity: The 20th century had just made its debut - and soon after, one of Hollywood's favorite leading men, Trent Osborn, made his debut - in a Philadelphia maternity ward.
Born Theodore O'Bannion, young "Teddy" was quite the little neighborhood Romeo, stealing kisses from beneath the playground Pollyannas' pipe curls. He also always had a flair for the dramatic, prodding his playmates into staging elaborate pirate adventures on the bounding waters of the ponds in Philly's most prestigious parks - much to the chagrin of the local police force!
After graduating from high school, he longed for adventure, even working as a truck driver to escape the city limits. But soon he discovered the local theater groups, where he was quickly spotted by a casting director for the Theatre Guild and whisked off to The Great White Way. His refined good looks, coupled with a certain aura of reckless abandon, brought him role upon role - and the attentions and intentions of an army of beautiful young actresses and debutantes.
After playing the gamut of juvenile roles on Broadway, Teddy, now known as Trent Osborn to the New York theater goers, was brought to Hollywood in 1935. A mainstay at Monolithic Studios, he appeared in scores of films, and his most frequent leading ladies included such glamorous stars as Gene Marshall and Madra Lord.
As flamboyant a figure in Hollywood nightlife as he was on the screen, Trent Osborn broke countless hearts. But when he turned on those bedroom eyes, everyone from starlet to seasoned veteran melted at a glance.


To my eyes, the original Trent was a Mel Odom illustration produced in 3 dimensions, a drawing come to life.

Despite being a great looking male doll, his joints and posing abilities were very limited. Jamieshow has solved that problem!

The new Trent called "A Double Life," is a resin ball-jointed doll with 15 points of articulation. He can wear all of Trent's prior wardrobe. Like other Jamieshow dolls, he came with a removable wig cap. This doll came with two molded wig caps in addition to the smooth one. 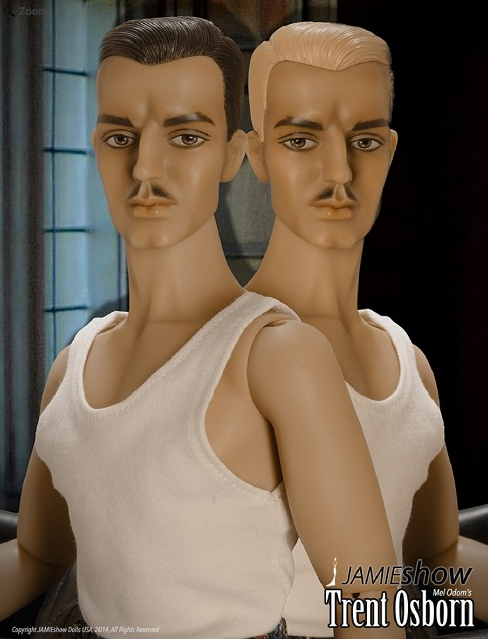 He is sold out at this time but here is the Jamieshow Link to read more about him.

My dear friend, Rita, has allowed her Trent to visit for a photo shoot. 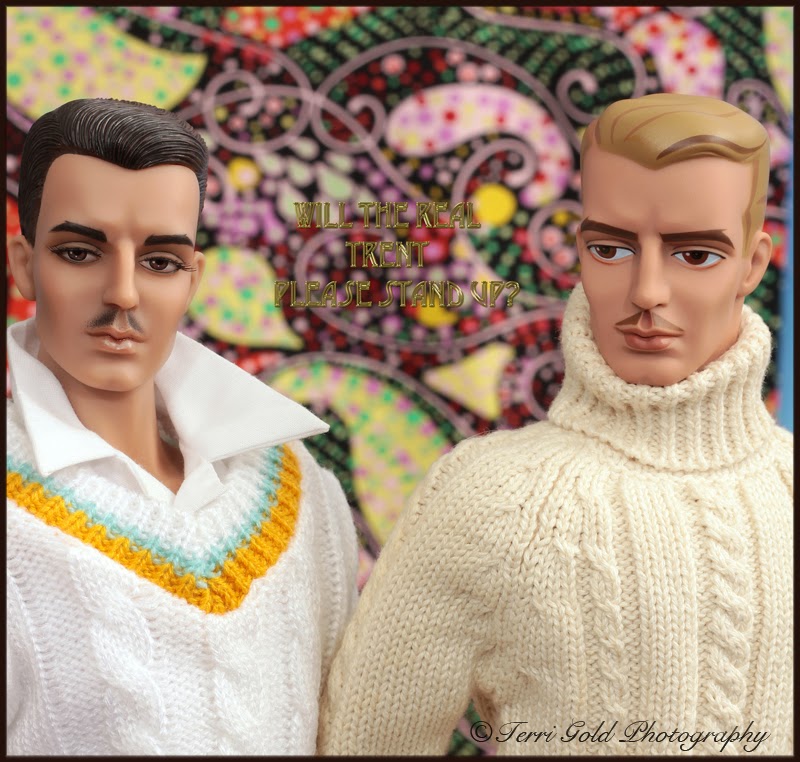 There's no question that he looks different in many ways.  Jamieshow captured the essence of Trent and made him better looking! My blonde Trent is "Skiing or She-ing?"

In the photo below,  Double Life Trent is standing on his own. He is wearing "Tennis, Anyone?" an outfit designed by Vince Nowell, produced by Ashton Drake in 2001.

Under the clothes, there are differences as well. 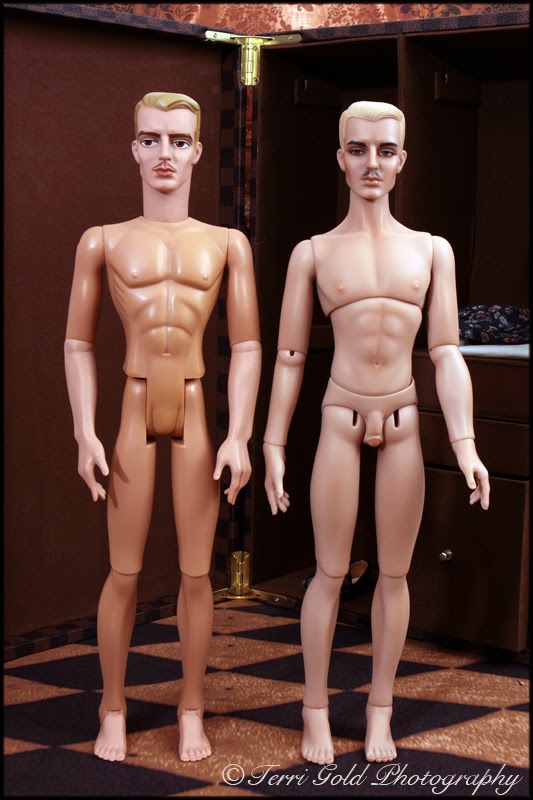 As you can see, my vinyl Trent has changed colors, although that may not be what you're concentrating on. 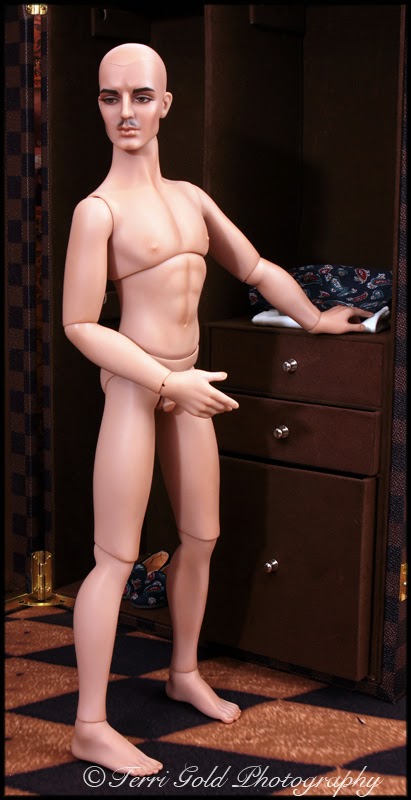 The W Club has opened their new doll selling season with an offering of six ITBE (Integrity Basic Edition) dolls. The lottery is for the right to buy and ends on March 11. It is only open to club members. Each doll will cost $99. plus shipping, handling and tax. Members can enter a ticket for each doll. Multiple memberships give multiple opportunities to win with a separate ticket for each entry.
On to the dolls. Reminder - you can click on pictures to see them full-sized.


My favorites are the Vanessa and the Isha with Anja a close third. I think if Vanessa and Isha had FR2 bodies, I'd really want them. As it is, I entered for only the Vanessa because even though she has the 2.0 sculpt, she looks very pretty. 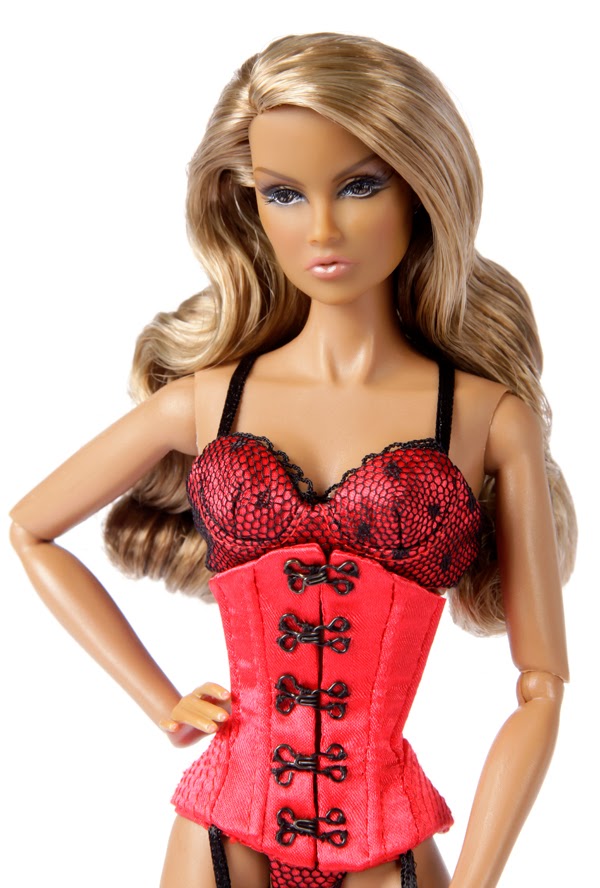 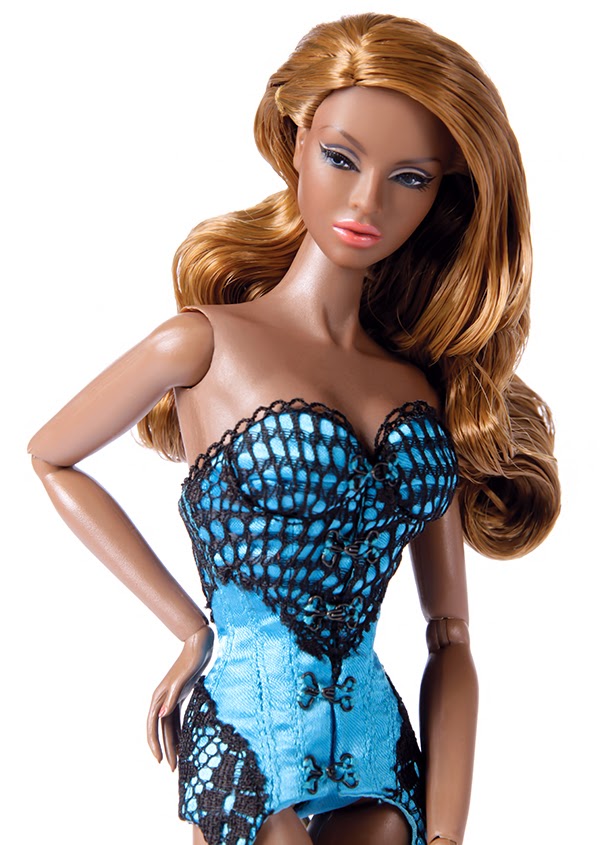 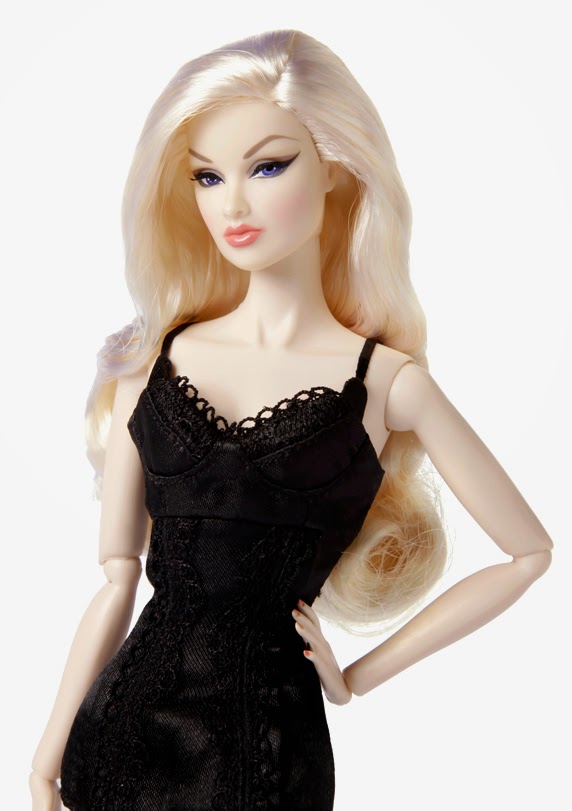 I find Buxom, the Veronique sculpt, doesn't look like the Veronique I know. It could be the appearance of a smile or the dark skin tone. Something about her is not Vero. 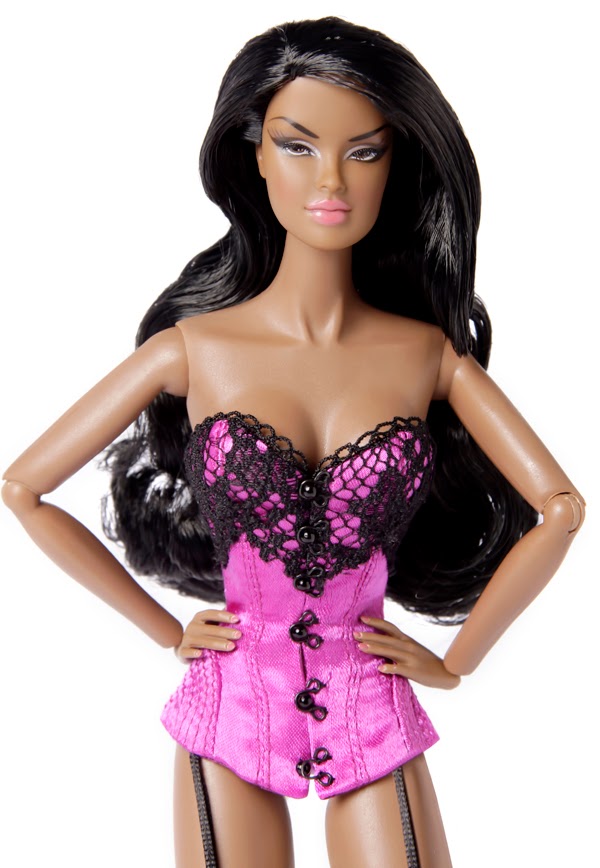 Kesenia is still  total vampire to me with all those teeth showing. But I do like the design of her lingerie more than all the rest. 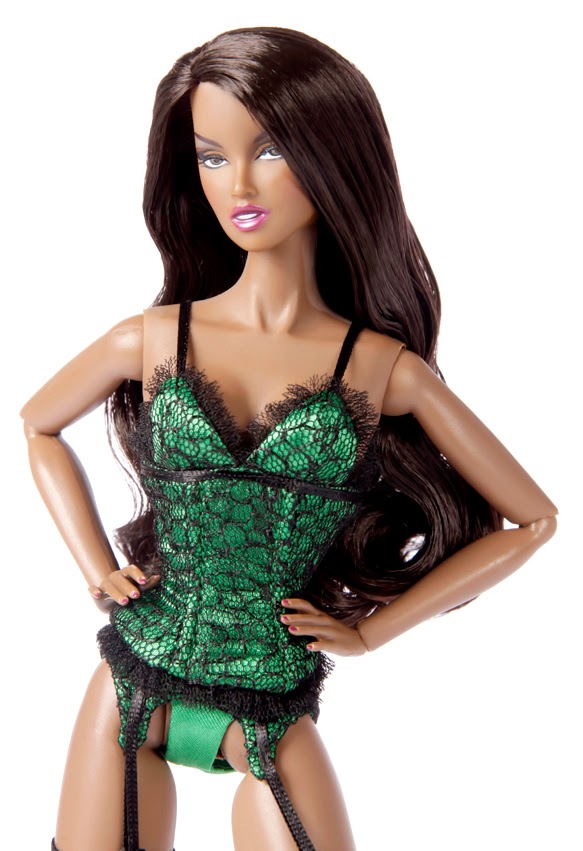 The new Finley Price sculpt will appeal to those who like smiley dolls. She can be the arch enemy of Agnes. Her skin tone is listed as FR Black.  The other dolls' skin tones are: Vanessa - Light Honey, Anja - Porcelain ,  Isha,  Kesenia and Veronique - A-Tone. 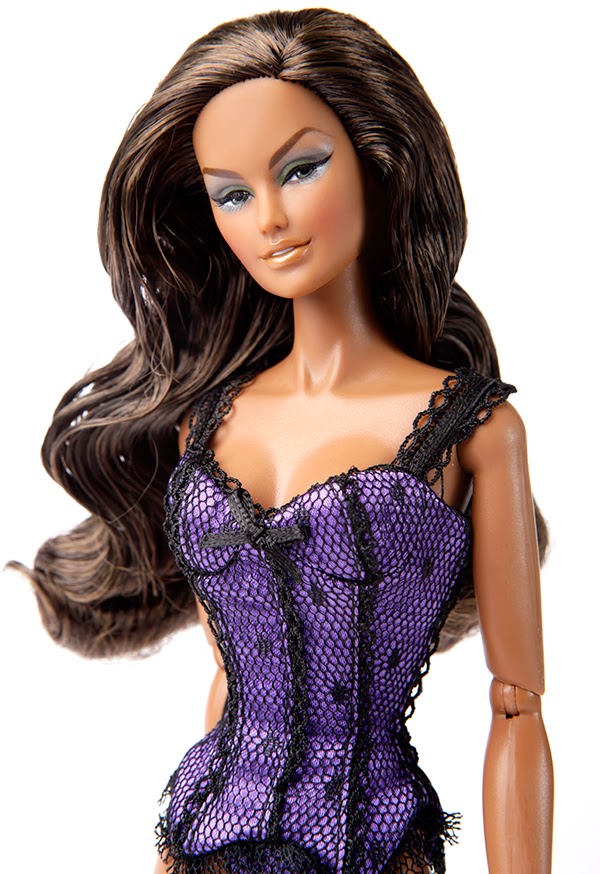 So what do you all think of these ITBE dolls? Is there value here? Will you be entering the lotteries?