Last night I went through my 2011 doll database and pulled my favorites of this year.

From Integrity Toys I chose five dolls, four of whom are FR2 dolls and one, believe it or not, is Fauxnessa. You may ask why Fauxnessa made the list when I am one of those who loved the original Vanessa sculpt. Well, this is a gorgeous doll. The other Fauxnessa, Monaco Royale, is one of this year's losers but Dress Code, the first Fauxnessa, was a winner.
I wasn't exactly sure that Flawless Elise was a 2011 doll or a 2010 doll because she took months to arrive with the proper skin tone and a properly created hairstyle but I love her along with every other Elise that's been released. Dasha is a total winner in my book and Tatyana, whose sculpt I do not care for that much made the list for her overall package - hair, makeup, dress. I just have to get rid of those black lines at the outside crease of her lips.

Quite a few Barbies and a few Silkstone dolls were added to my collection but were not considered for this end-of-year list. I tire of Barbie dolls very quickly and the Silkies, although pretty to look at, just hang out looking fabulous. However, one Mattel doll did survive the cut—Klimpt Barbie. She made it because of the back story and she is pretty. She doesn't have that pasted on smile most Barbie dolls have and her hair is adorable. A bonus is that she's not on the Model Muse body. 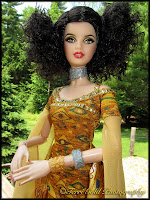 Angelic Dreamz' JAMIEshow Grace was a winner. I have posted many photographs of her on this blog as she is wonderful in front of the camera.

These two Ellowynes from Wilde Imagination are among the winners: An Empty Thrill and Dark Shadows.

Among the other Tonner dolls is Heart on My Sleeve. She was produced prior to 2011 but I didn't get her until mid year. This doll is from the Wizard of OZ Reimagination line. She is a creative version of the Tin Man and I think she's fabulous.

The first of the new wave of Theatre de la Mode dolls was Noir #99. This doll has a stunning sculpt.  She, too, is a fabulous photo model. Sadly, the second new TDLM, Royale #82, has not arrived as of this writing.

From the Halloween Convention came the Red Queen, with another amazing sculpt. She is so wonderfully evil-looking.

Saving the best for last...

Devon, one of Paul Pham's Numina and an FDQ exclusive released in December 2010. I was thrilled to get her. If you have never held a Numina body or seen one without clothes, you are missing something excellent! And, I am expecting the newest Numina any day now.

Talc and Geometry. What can I say other than, who knew? If their bodies had not been redesigned to allow better positioning and posing I would have not taken the plunge.

Many more have come and many have gone. I've made a few impulsive buying mistakes for stupid little stuff.
My main focus has moved back to larger dolls again. I found it very easy to sell what some would consider 'grail' Fashion Royalty dolls in order to fund my other desires. However...this year I was able to add several Tiny Kitty dolls that I was never able to get. They are still safely NRFB waiting to move to a new home - we're all waiting for that day.

I'd love to hear from all of my readers about your favorite dolls of 2011.


This is a warning regarding fraudulent email claiming to be from the United States Postal Service. I think it's very serious as so many of us doll collectors sit impatiently waiting for our latest purchases to arrive.
This is more than SPAM, it's a serious attempt to mess up your computer.
I have copied this directly from the USPS website.
BEWARE OF SPAM!


BOGUS DELIVERY MESSAGES E-MAILED TO
POSTAL CUSTOMERS
Some postal customers are receiving bogus e-mails about a package delivery. The e-mails
contain a link that, when opened, installs a malicious virus that can steal personal information
from your PC.
The e-mails claim to be from the U.S. Postal Service and contain fraudulent information about an
attempted or intercepted package delivery. You are instructed to click on a link to find out when
you can expect your delivery. But Postal Inspectors warn: Do not click on the link!
Like most viruses sent by e-mail, clicking on the link will activate a virus that can steal
information—such as your user name, password, and financial account information.
What to do? Simply delete the message without taking any further action. The Postal Inspection
Service is working hard to resolve the issue and shut down the malicious program.
If you have questions about a suspicious postal email or wish to report spam, contact the
Postal Inspection Service at spam@uspis.gov.