The lace trimmed $1200 sweatshirt was just hanging around my studio when a naked Model No. 4 Basic Barbie came along and decided to try it on. It looks great on her. Don'tcha think?
She's wearing her own jeans & rubbery boots. Glasses are FR. The sweatshirt needs to be ironed to remove the impressions the packaging made across the waist area where it was tied into the box. 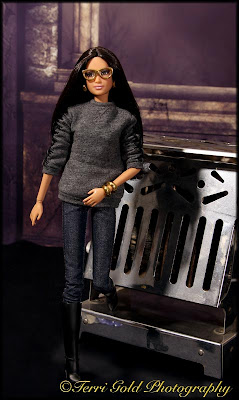 I'd been trying to sell my NRFB Life on the Runway Fashion Royalty set for about a year. There were no takers. The Frank Sinatra Barbie came along and now it's hers. 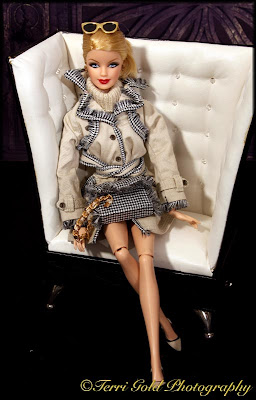 Yes, the shoes fit. She can wear her own black and white checked pants with this outfit. It's perfect!
No matter how many times IT changes the body sizes, there are dolls that can wear the fashions that have been produced for FR the past 10 years.

Obviously I've indulged a passing weakness for cheap, instant gratification type dolls.  With the Angelica Doll, the sculpt is cute but the fashion is low quality. The blouse may be useful in other outfits but the rest has to go. I had to wash some glue out of her hair and trim it. It wasn't easy to get it tamed. The same thing happened with the Sinatra Barbie. 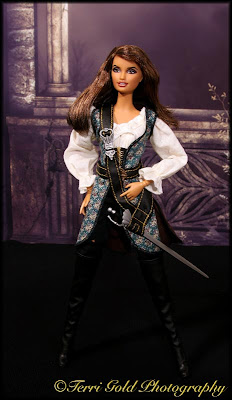 I detest deboxing Barbie vinyls. It's dangerous. One runs the risk of wrist slitting and finger slicing. In this doll's case, I accidentally snipped a piece out of her pants while trying to get the body armor off.

"When Limited Editions Aren't So Limited"

Here is a copy of an article from Monarch Collectibles which was published on their website.  I have reproduced it here in it's entirety. Visit their website. They say they're San Antoinio's Largest Doll and Miniature Store.


When Limited Editions Aren't So Limited

If you use the textbook definition of the term "limited edition," then as long as a doll was only in production until a certain number was made or during a specific time frame, the doll is limited. But can it really be considered "limited" when several thousand were made?

Technically, it's an accurate description: even if production is 10,000 or 100,000, it's a limited edition, because they only made that many. But I have to laugh a little when I see something that's supposedly limited with that kind of number attached to it. A quantity on that large a production scale rivals the annual run of some open editions, sometimes enough to make the doll or so-called limited item fairly commonplace.

Once again, like a few of our recent blog topics, this harkens back to a time before the Internet made collectibles accessible to the point where what used to be a rare find is now easily spotted online by hundreds of millions of Internet consumers all over the world. Back in the dark ages of computing and dial-up modems, and long before, you would have to travel, possibly hundreds if not thousands of miles just to find one doll that might have been limited to 1,000. But today, if 1,000 are made, there's probably anywhere from a dozen to 900 listed online, available through retail stores, Internet wholesalers, or private resale.

Some limiteds are so obviously limitless in supply that these dolls seem to have lost any value they might have held when people had to drive into a major city to go to a special store in the hopes they would have a specific doll that no one else carried - and that store might have only received one or two of that doll. Now, even if only one store in every state has one of that doll each, that's 50 of that limited doll that you could probably find at their online shops or on the secondhand market for a fraction of the price and without ever having to leave the comfort of your own home. With the consumer superhighway, you could be on your way home from your local doll store, and buy a doll that you couldn't find there from another doll store a thousand miles away.

While limited editions that numbered in the hundreds can still be quite rare, depending on how long ago they were made and what the rate of resale may be, many modern dolls that were limited to the thousands are usually just a simple Google search away.  Although, much more factors into the doll's worth than it's edition, including the number of years since the doll stopped being made - dolls that date back a decade or more are most likely going to be even more limited than their edition suggests based on the number that are estimated to survive. Modern dolls with high edition counts hardly make sense to me, however, since they are likely to turn up everywhere, especially with the usual suspects, Amazon and eBay. Still, we see some companies that haven't scaled back their supply to increase demand in the Internet sales era.

There are Barbie dolls that were made at the turn of the millenium with edition numbers in the thousands that sellers can't even give away on eBay. Marie Osmond dolls are changing with the times (switching it up from porcelain Adora Belle dolls to ball-jointed vinyl Adora Belles, for instance), but the editions still vary wildly between the hundreds and thousands. If the doll is very popular, you might still have difficulty finding one in a larger edition, but some resellers buy several of a single item when it's brand new for the sole purpose of selling for a profit later. And later could be while the doll is still on pre-order in some cases, and in others, it could be when the edition is sold out; so then they release their stockpile to the Internet market just after it has run dry and collectors are watching for any signs of water.

One doll maker who does generally well by his edition size is Robert Tonner. The fashion, concept, and Hollywood dolls that Tonner makes often sell out within the same year due to well-scaled production. While you'll still find some of Tonner's dolls on the resale market after his official site has sold out of them (this is for a few reasons, one of which being the would-be resale profiteers listed above), they retain their value well because once they disappear from the secondhand market, they're less likely to resurface frequently, if at all.

Asian ball-jointed dolls, or ABJDs, have become plentiful in the last five years. ABJDs that captivated me years ago when I first started collecting them are still available, and companies that I can hardly begin to keep up with are springing up all the time making more models and some more inexpensive than the older and bigger companies. But these are generally open-edition dolls. When an ABJD is limited, that term still has serious meaning. Dream of Doll made many of their limiteds in 2005 and 2006 with numbers in the teens - a few of their most coveted sculpts were limited to only 14 dolls, and since then, others of their extremely exclusive limiteds have numbered only one or two. Extraordinarily rare doesn't quite communicate the odds of finding one of these dolls on the secondhand market, nevermind one perfectly in tact or complete with fullset. Another ABJD company, Soom, creates monthly fantasy dolls that are not only breathtaking, but with each being produced only for one month, they're among the most prized pieces of many collections, since they are definitely limited even though they aren't too scarce. And of course, the original mainstream Japanese ABJD company Volks continues to produce limiteds that are the Holy Grail to some in the ABJD community.

Limiteds don't have to be impossible to find to have value, and dolls in unlimited production can be worth more to you than any limited or numbered edition piece in your collection. I just think that if you're going to make an edition of 10,000 dolls, you should know it won't really be viewed as "limited" in this day and age. Technically, on paper, the word "limited" is appropriate, but in concept, as far as post-distribution is concerned, it's not necessarily true. 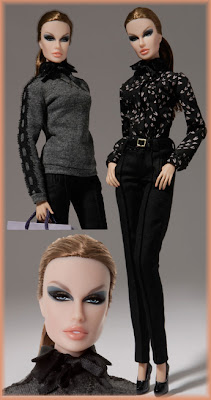 My dolls finally arrived yesterday and were speed deboxed. You've probably all seen pictures and since I don't really have the time, I won't be photographing her anytime soon. The above picture is from combined IT promo images. The doll looks exactly like her promotional images.

I am looking forward to seeing this new FR2 sculpt painted differently as this one is not my taste although it's done very well. I've seen her with her hair taken out of the pony tail and she softens up nicely.

The white handbag is a little work of art with wonderful details and a little zipper inside. You can't see the shoulder strap in the photo below but it's there. The shoes are perfectly constructed in that the doll can stand on her own - balanced! And the shopping bag is a cute touch. She does not come with any jewelry. 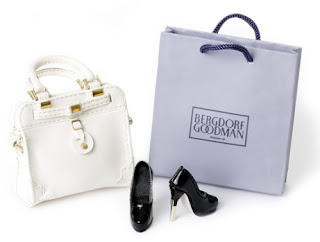 The pants have working inset pockets, a teensy zipper fly and fit very well. They are an excellent weight fabric for this type of doll garment. The blouse is another little work of art. First of all it's fully lined. There are tiny darts, pleats and decorative sewn details down the front and along the back and a sheer double organza collar. The cuffs have a metal hook & eye closure.  (Someone has to make miniature hook & eye closures one of these days so they can be in better scale with doll clothes. There has to be another way.)

If you get a chance to examine this blouse, it's a treat. Most human shirts don't have this much detail. This is classic Fashion Royalty excellence.

The only downfall of this ensemble is the sweater/sweatshirt. The weight of the fabric is wrong. It just doesn't lay properly and certainly doesn't flatter the doll in any way. The real life outfit is gorgeous and the sweater is the star. See below. Apparently in this case, the design could not be translated well for a doll. But I certainly give them an A for effort. As I said, there's not a stitch of careless construction in this ensemble. I wonder if the sweater would work on a flat-chested, slimmer doll.

Do I think she is worth $150? Compared to the other FR2 dolls, she was $25. less. If you love the face and the outfit, then the answer is a definite yes.

At this point the only way to get the doll is from other collectors directly or on eBay. Bergdorf's sold out shortly after they were posted.

You may be interested in seeing these images from Nordstrom's & Neiman Marcus' websites showing the real life Jason Wu garments upon which the doll's ensemble was based.

Save the Date - Barbie Dream Sale 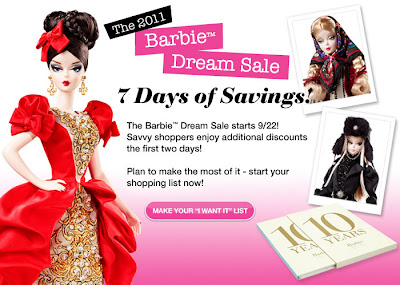