Twilight's Bad Guys (and a Girl)

Three new Twilight character figures were announced today by the Tonner Doll Co. If you haven't read the series, these three are a small nomadic group of vampires who provide most of the plot of Twilight. Victoria is a major bitch. 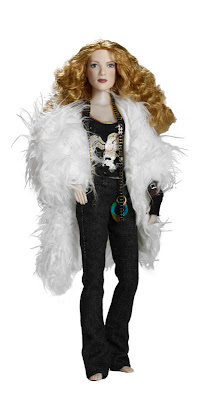 You may or you may not be wondering what happened to her shoes. This trio of phlebotomists goes shoeless. What? Did you think they forgot shoes for the dolls? Victoria actually comes with flat and high-heel feet so she can run around on her toes. Doesn't everyone?

Laurent doesn't play much of a role in the books, but this doll is the best of the three IMO. I love the faux leather jacket and the tight cords. He's even got the tops of his boxer shorts sticking up from above his belt.

James is a serious predator. His outfit makes more sense to me. I don't understand why they describe him as "devilishly handsome." This doll is the only one out of all of Tonner's vampires that actually has a sickly pallor and could be a vampire. 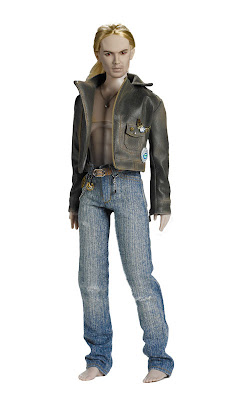 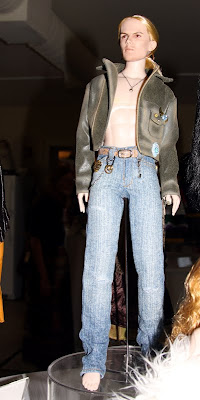 Pictures above: Tonner Doll and Me! Mine is the second one of each pair of shots.

When I saw these dolls at the reveal at the Tonner store last month I wondered why one would want the bad vampire dolls. Then again, why would anyone want vampire dolls in the first place? Logic does not belong in this discussion.
I understand the attraction to Edward as he is highly romanticized in the book. I have to admit that I read them all...at least I think I read them. They're like Chinese food. You're hungry again shortly after reading them. They are quick reading, not frightening (unless you know good literature) and possibly entertaining if you want to know what the teeny boppers are screaming about.
All I want from this trio is the clothes.

The suggested retail price for each doll is $179.00. Apparently between August and now, the price was raised by $20 per doll. Did the economy suddenly get better when I wasn't looking? You may be able to see the price on the cards of my photos. It says $159. These vampires exact quite a price, don't they?
Production is 1000 of each and they are due to arrive from the beginning of October through December.
Pre-Order at Cherished Friends for $153.


What did I do with that garlic necklace? 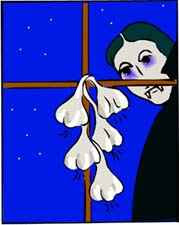 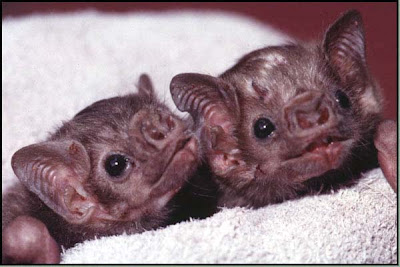 I did not know anything about Adrian previously. When I saw photographs of "A Woman of Means" I knew I had to have the fashion. Now that I have it, I'm thrilled that I can dress a doll in such a stylish and beautifully made outfit. Here is a brief bio and photo of Adrian which I have snatched from the internet:

Adrian, Gilbert, 1903–59, popularly known simply as Adrian, fashion designer, b. Naugatuk, Conn.
Educated in New York City, he created designs for Broadway shows until 1925, when he moved to Hollywood. As studio designer at MGM studios (1928–41), he created glamorous clothing for such stars as Greta Garbo, Joan Crawford, Jean Harlow, and Katharine Hepburn, his opulent designs influencing haute couture throughout the 1930s and 40s. Adrian was known for his extravagant, draped evening gowns; hooded dresses; embroidered, padded evening jackets; and elegant suits. He was creative director for MGM's Wizard of Oz (1939), one of his most acclaimed productions; the same year he married actress Janet Gaynor. From 1942 to 1952 he ran a fashionable Beverly Hills salon.

The suit: there was been a great deal of discussion on one doll board regarding where this suit was manufactured. No definitive answer came about as a result of those queries. I didn't see it as relevant in any event.

None of these are meant to be seen as artistic images. They are for showing the style and details of the garments and accessories.

The outfit came with lots of pieces: jacket, skirt, sleeveless shell, handbag, shoes, gloves, earrings, bracelet, hat and faux fur. It was packaged almost identically to the way Ashton Drake packaged the Gene line fashions. There was a lovely ribbon tied around the box with a tag.
I had heard that although the fashion was created for Robert Tonner's Joan Crawford doll that it would fit other 16 in dolls as well. Heavenly Gene needed a change of clothes so she got lucky. Did it fit? The waist and hips of the skirt are visibly large. The bottom of the shell hangs loosely but overall the suit looks very good. It is easy to put on - no struggling with hooks or ill fitting shoes.

The inside of the jacket looks almost as good as the outside. The lining is a royal purple - I love that. The label is a replica of Adrian's original label! The stole is wired for shaping when placing it on the doll. That's a great detail. My stole needs to be aired out as it has a weird odor as if it's been stored too long in a basement in China. Not that I'd know what a Chinese basement would smell like...

The gorgeous metal and rhinestone embellishments truly make the suit. The one at the waist is not laying properly. If it really bothered me, I would make a temporary tack with three stitches to get it to lay flat. It's making a slight right turn as it is now.

The bling, in addition to that which is sewn on to the suit, consists of a multi-strand rhinestone bracelet and dangling rhinestone earrings.

The large zippered handbag and open toed pumps are black patent leather. There is something a little off about the tops of the shoes at the opening. They are too long - unless this is a style of which I am not aware.

The hat...I really didn't know what to do with it. I put it on and turned it this way and that and still couldn't find a pleasing way for her to wear it.
This outfit cost $129. and was available as an optional purchase at the Hollywood Ahoy Convention which just took place in Long Beach, California in August. There are a few still available. Buy one! You will not be disappointed.
Here is the link to purchase Hollywood Ahoy souvenirs that may still be available:
http://sandrastillwell.com/2009/
Tell Sandra I sent you!
Posted by Terri Gold at 8/30/2009 09:00:00 PM No comments: