For those of you that paid $550. for the Barbie Ultimate Edition book last year, the publisher of that book has a little surprise for you! They've come out with a so-called "trade edition" for $45.  It has the same images.

Their website says: "Following the success of the special Ultimate Collection edition published in celebration of Barnie's [sic] 50th anniversary of Barbie, Assouline has created this unique trade edition&151 [sic] and the perfect collector's item."*

*So their editing isn't the best.


The Original aka Ultimate Edition $550.00
The Proletariat Version aka Standard Edition:

Both editions may be found at Angelic Dreamz


Chill Factor, 2010 Dynamite Girls in MiuMiu 2010 pre-fall collection posted by cocoklein on Dolly Daily. There's no doubt at all that these fashions are 'cut from the same cloth' as it were. But how is it that they came out the same year? IT needs a lot of lead time to produce a doll. Did the same person design the fashions? Did they have insider knowledge of the MiuMiu fashion designs? Very strange. 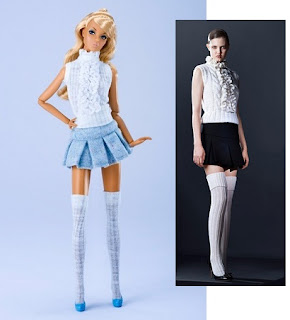 RestoreDoll.Com Not Closing as Planned

A letter was sent out tonight to all RestoreDoll.Com customers by owner, Kathy Gray. She will not be retiring along with the business as her niece is going to pick up the reins and run the operation. Kathy will be semi-retired and continue to answer email and discuss doll restoration with customers.
The current 30% discount will continue. Kathy also announced that they will be introducing 24 new colors of Katsilk Saran this year. New paint colors will be added as well.

I was looking at Tonner's new and recent male sculpts and I went back to 2006.  It was around the time or shortly after the appearance of the Harry Potter line that Tonner began introducing different adult males to the line. Since then we've seen new male sculpts on a regular basis. Many of them are licensed characters. Until tonight I didn't realize how many male dolls have come out of the TDC.

Just this new season alone, besides Hogyo Yoshio, whose dressed doll version was pictured in yesterday's blog post, we now have Stefan Salvatore, a dressed character figure from the Vampire Diaries. In The Vampire Diaries, Stefan has the ability to influence people's memories with his mind. His eyes are incredibly intense and the facial screening looks hand-painted.
(To me they're dolls, not character figures.)
Stefan's brother (?) Damon Salvatore below, has already debuted but hasn't shipped yet. I think he is a great looking doll....oops, character figure.
There is a basic Hogyo Yoshio in the new Freedom for Fashion line.

From the Harry Potter line, Professor Dumbledore with the Richard Harris (likeness) Albus Dumbledore head sculpt and Lucius Malfoy with the Jason Isaacs sculpt (likeness) are incredibly interesting sculpts and would make great basics if only the licensing would allow.

Others:
Baris; Nicole; savyuser1217; Stacy in IL; T & J Smith ; Sue Townson ; toyblahg;
Let's play a game.
The first person to correctly identify the character/sculpt/name of the doll in every picture below wins. For example: if the character were Tyler Wentworth, we'd need the actual name of the doll.  If the character were Ava Gardner, you would need to tell us which Ava it is. (If you find Tyler or Ava in the following list, call your eye doctor immediately.) Spelling does not count unless 99% of the letters are wrong and/or missing.
Winner gets fame and glory and the 2010 rhinestone encrusted 10th Anniversary Tyler Wentworth pin. It's really a beauty.
Please number the guesses in the same order as the pictures and submit them via email in list form. (You will find my email address on my profile page and on every Nigerian computer in the world.)

In the case of a tie, the time stamp on the submission wins. The later submission/s will get fame, no fortune.