The brand new JAMIEshow St. Tropez Collection debuted at IFDC this weekend by George Gonzalez of Angelic Dreamz.  It consists of five female dolls including a new sculpt named Grace. The dolls are dressed in bathing suits and Grace is clad is a very sexy fashion. Also included in this collection are (amazing) rooted wig caps, summery outfits, sunglasses, shoes, bathing trunks for the boys and outrageous lounge furniture. 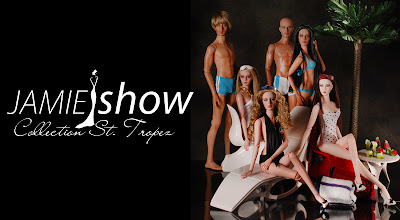 Two of the Most Unattractive Royal Couple Dolls

These are from Paradise Galleries. The sculpts are very poorly executed and there is no resemblance whatsoever. I find it difficult to believe that this is work of their "master sculptor." 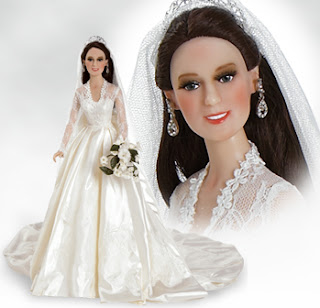 Paradise Galleries does offer other 'fashion' dolls at half the price that look so much better, including this one of Marie Osmond. I have no idea what the quality of the fashions might be. The dolls are not articulated. 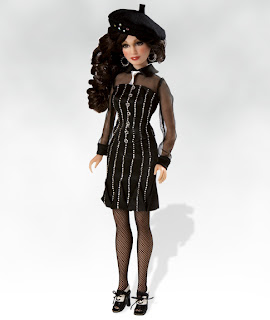 Perhaps a collector out there who has purchased a Sandra Bilotto would fill us in on the details.

In spite of eBay's policy not allowing the listing of Nazi and/or Nazi related replicas, a seller based in Hong Kong is offering a multi-piece German desktop accessory set which includes a bust of Hitler, a miniature Mein Kampf and several other assorted desktop items. Hitler's eyes have been blacked out. I emailed the seller to ask if the bust was Hitler and he responded in the affirmative with several exclamation points after the word YES. He was very happy about that. The winged item is the partially blacked out national insignia of the Third Reich. Yes, girls and boys, you can get educated by playing with Nazi replicas! Oh, fun. 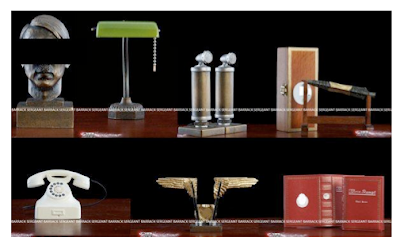 They also listed a desk and chair set but that sold out. From the image I cannot see the insignias on the desk. 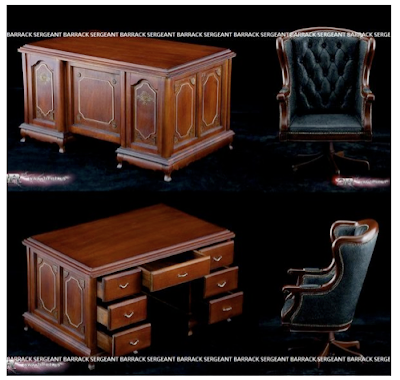 You may wish to populate your diorama with this Third Reich character, also selling out of Hong Kong but the seller ID is different:

Their disclaimer:
"This product is for historic education purposes only, and is not intended to glorify, nor exploit the horrors and atrocities of war!"

If we don't speak out, they'll think we don't mind. 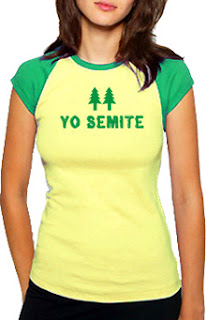 Recently, another collector posted images of her new wood 1/6 scale armoire that she ordered from Plaza Mildendo. If I weren't busy packing away my dolls, I'd have one by now.  Look at this amazing piece of furniture for only $110. plus shipping. 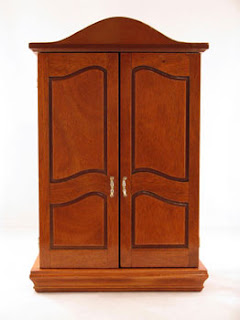 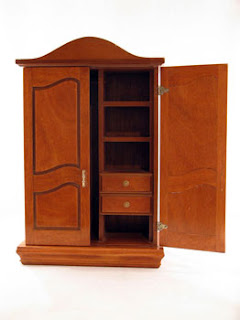 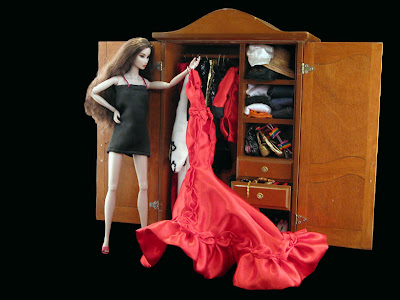 This company is located in Mexico and sells furniture in several different scales including 1/6 and 1/4. Their prices are excellent for this quality and style. They are open to customization as well. 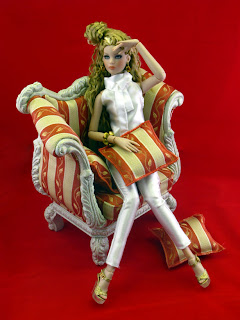 They are also selling jewelry, clothes and accessories. Have a look.

In the collectibles category, a few interesting items are still available under the  buy one get one free offer at Toys R Us.

They've been available for a while but at this price, you may want to get a few more of the Dolls of the World - . At two for $39.99 it's a pretty good buy. 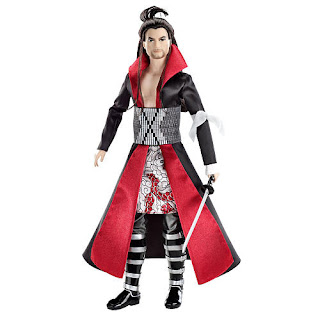 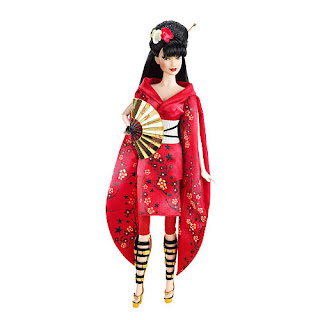 On top of that, if you add something to bring your total to $49. or more, shipping is free.

The Cost of Attending A Convention

I've been asked many times how much it costs to attend a doll convention. So I'm going to attempt to put together an outline. There are many  unknowns because each person's costs will vary according to what they buy and participate in.  I am taking the costs of the convention and the convention collection from the 2011 Wu Convention list.

Workshops  Workshops are free but attendance is via lottery.
Workshop Kits & Dolls are an Optional Purchase. $175 for 2? +/-
_Flocking
_Styling
_Doll Process
_Royal Hair
_Poppy's New Groove
_Back to Our Roots (Free Practice Kit)
_Fashion Illustration
Postage  If you are not driving, you will probably want to ship some items home.

I'll throw out a figure which doesn't include transportation or excursions away from the hotel: $2774.55.  It includes some of everything and 4 nights at the hotel sharing with one other person. It could go lower or higher depending upon how many centerpieces you buy and what you spend room shopping and in the store.
The numbers in red above are the numbers I used to get to that figure.

There are so many excellent photographs being posted that it was hard to choose so I just let time be my guide.  I'm sure I missed some beauties. If you feel you have an amazing photo or know of one, please send me the link. I'll be happy to consider it for posting this week.

Just one fabulous example of the Fourth of July themed photos that are being posted this week on the doll boards. This one is from Ann in Florida. 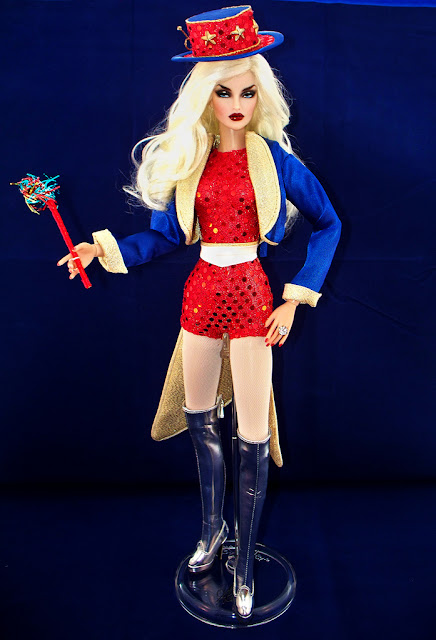 Many of you know that my husband and I have decided to relocate out of New York State.  Since this is not a political blog  (cough, cough) I won't get in to a discussion about taxes but it's gotten out of control.

Let me look at this in a positive light. If we paid less taxes I'd have more dolls and it would be even more difficult to move. Ah...that's such a relief. Having to pay a huge tax bill has made it easier for me to pack.


What if, after a few months, I don't even miss the packed dolls?

So with that charming, albeit alarming, thought in mind I present you with this quickie picture of Marcella in her new fashion. 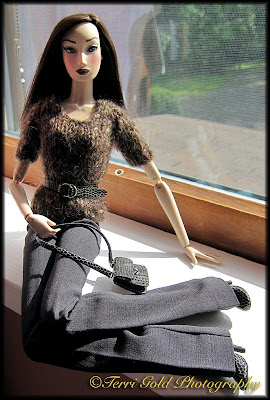 You  may have noticed that in most pictures of FDA dolls, they are not standing. That's because their legs are too thin (and they are weighty dolls) to support them without a serious doll stand.
A few weeks ago, FDA ran a sale and I scored this "Laine & Lezard" fashion that also comes with a beautiful pleated skirt and hosiery. I've wanted this outfit forever but it was too expensive. It fits beautifully and looks wonderful.  Everything from their early lines is now sold out. There are still some items from the Noir line and I want all of them but I want a lot of things I'm not getting. Sigh.

The video's soundtrack is annoying, but the dolls look great.


The Doll Market sent out a notice that their new website was to be launched on July 1 and would be better with bigger pictures and all that jazz. However, if you had a password, it is now gone. So dumb.  I checked the site and indeed the pictures are bigger but the site is still ridiculous to navigate. The descriptions of the furniture are still missing dimensions and in order to see the 100's of items that have free summer shipping, you have to look through 1000's of items. All of them will be something you probably don't want.
Take a look at their sorting system. Everytime you pick an option you are presented with choices you don't want to sift through. The site is much worse than it was before. If they want people to shop, their link that says "Click Here to Shop" should be bigger and on the main landing page. This was definitely an amateur web job.
Spelling? So Truely Real Babies?? LOL

Getting back to the topic of packing dolls. I've started with my 16" vinyl dolls. They are being packed nude, wrapped in tissue and standing up in appropriately sized boxes that hold 4 or 5 dolls each. I have about 30 dolls packed so far. Then the fashions need to be packed carefully. I don't know what's worse. So far I've only broken one earring off of it's post.
I'm writing the contents of each box on the outside and I'm also taking group shots of each doll that will be inside each box. Those pics will be pasted on the box. Complicated? Yes, but my dolls and their stuff is the most organized part of my life and shall continue thus.
I would lose my mind - what's left of it - if I had to pack hurriedly. 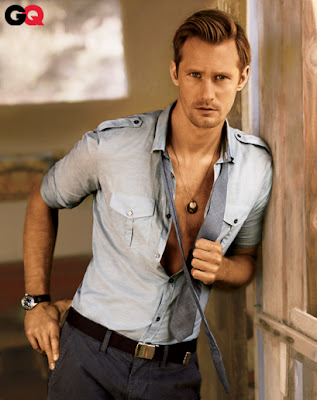