At about 6PM EST on February 15, Inro LE 40 went on sale. Here is the description as best told by her creator, Emilia Nieminen:


Inro is the first ever limited edition Inamorata doll. The Inamorata are 16" fashion ball jointed dolls made of polyurethane resin, have 21points of articulation and come with 4 pairs of exchangeable hands. Click the links to see the doll measurements and to read more about Inamorata dolls. Inro has a subble make up in earthen tones amplified by a fluttering set of over long runway eyelashes. She has a full body blushing and nail polish in deep maroon.
Inro's fashions is a modern haute couture interpretation of a samurai armour and she carries a 1:1 scale inro box as her purse. The outfits consists of a corset teddy that can also be worn as lingerie, a pencil skirt armoured with hand-painted bamboo slips and an intricately detailed leather jacket. The inro box purse is printed with golden paintings on each side: one with a cicada and the other with a dragonfly. Our beauty teeters on a pair of precariously high heeled boots carved and hand-painted with an Asian lacquer painting landscape in gold and black. Inro's elaborate geisha style hard cap wig is hand-made by PattaArt in pale gold in the highest quality KatSilk fiber. 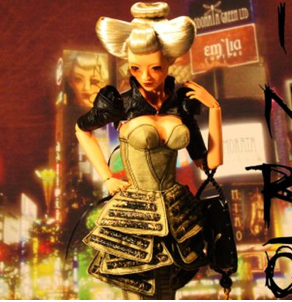 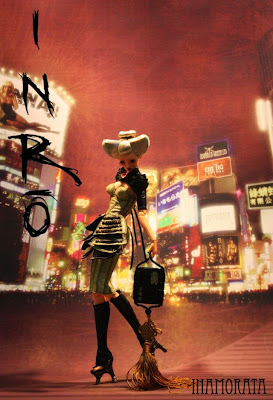 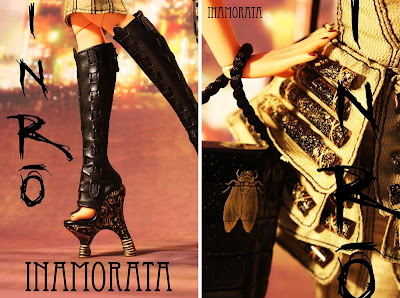 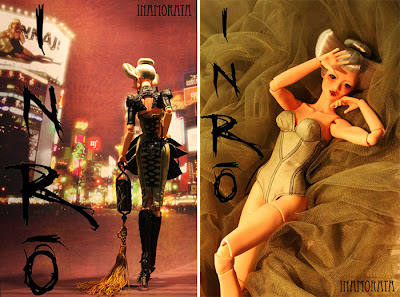 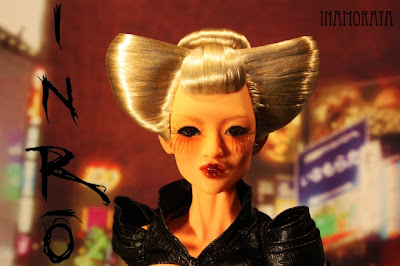 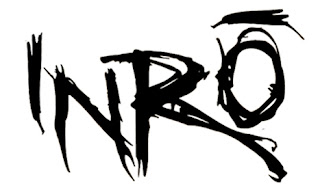 Some wonderful photography was posted on Prego yesterday for the theme of Valentine's Day and Couples. I would have liked to post every one of the beautiful photographs. Here are just a sampling.

Count me among those who were stunned at the news of the Pope's resignation. That's all I have to say about that.

This photo was originally posted on Facebook today 1/11/13, however I cannot find the original or I would link back to it. If you have a link, please let me know.
Another collector posted it on Prego. I think it's a hoot. 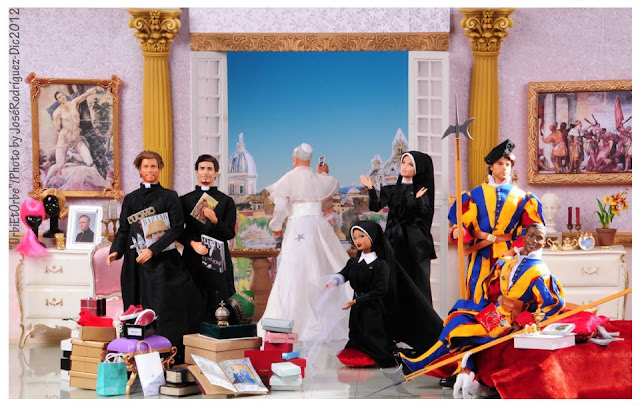 I'm impressed by the amount of detail. At first I thought that the collector really did this fast but then I looked at the date - December, 2012.  Apparently it was not always called Arrivederchi (which means goodbye in Italian.) The priests are holding fashion magazines. There are fashion boxes all over with shoes spilling out amongst little shopping bags. One nun is admiring a tulle item....

Oh the stories the dolls could tell.

Note: The original title "Urbi et Orbi" definition from Wikipedia:
Urbi et Orbi ("to the City [of Rome] and to the World"; literally, "[to (the)] City and to [the] World") denotes a papal address and Apostolic Blessing that is given to the City of Rome and to the entire world, on certain occasions. It was a standard opening of Ancient Roman proclamations.
The blessing is given each Easter and Christmas in Rome from the central loggia of Saint Peter's Basilica, at noontime. Part of the urbi et orbi blessing is the remission of all temporal punishment due to sin through a plenary indulgence attached to the Papal blessing.

Very exciting news just out: Mel Odom has teamed up with Jamieshow Dolls and FDQ in a new venture. It will be a doll. Jamieshow dolls are resin. Mel does Gene. So will this be a resin Gene? One can only hope. Gene collectors are just now reviving from fainting at the news.

If you want to be one of the first to see the doll and hear more about the future line (?), you will have to go to Orlando, Florida in April. Perhaps I'll see you there.

Come celebrate Gene's 18th Birthday with Mel Odom. Hosted by JAMIEshow Dolls and FDQ Magazine.  Join us for a two hour luncheon featuring guest of honor Mel Odom, as he talks about Gene Marshall and announces a new collaborative effort with JAMIEshow Dolls.  This is Mel's first public appearance since the retirement of Gene Marshall in 2010. Meet and greet Mel in person, and watch a history of the Gene through the eyes of Mr. Odom. We will be presenting a special new Ltd. Edition doll at the event, which will be available for purchase and to take home!

Mel Odom’s art first attained prominence in the mid-1970s with a series of exotic illustrations done for glossy magazines.  These pencil and watercolor drawings soon attracted assignments from art directors of other magazines, leading to a seventeen year, free-lance relationship with Playboy magazine, and covers for Time and Omni magazines as well as countless books. During this period, a successful line of posters and greeting cards using Mel’s iconic images was published by paper Moon Graphics.
In 1995 Mel retired from illustration and focused on a three-dimensional project, a fashion doll for adults named Gene Marshall.   Gene’s story of being a movie star during the 1940s and 50s was irresistible to collectors, and within a year of her 1995 launch at Toy Fair, Gene was in fact a star.  Bits of her story came with each doll and costume and in 2000 her lavishly illustrated biography: “Gene Marshall, Girl Star” was published by Hyperion Press.  Gene has been voted in Doll Reader the most influential doll since Barbie.

Note: A full sit down luncheon will be served with three meal options. Choose meal options at registration.  Click below to register.

It's begun again. Does anyone wonder why there is almost always a major snowstorm before or during Toy Fair? It's New York; it's the middle of February.  That should provide a clue. But the Fair goes on.

If you want pictures, IdleHandsBlog is your best bet. His blog, http://idlehands1.blogspot.com will keep you up-to-date. He also tweets  Twitter.com/nomadixxx and his Flickr Photostream is loaded.


Here are examples of the photographs some of us fashion doll collectors may appreciate. They are obviously manufacturer photographs with his logo superimposed. These dolls will be available later this year. 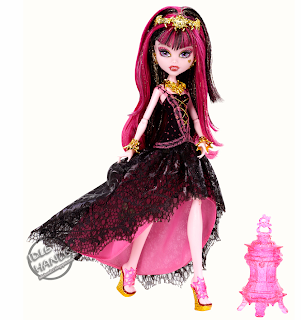 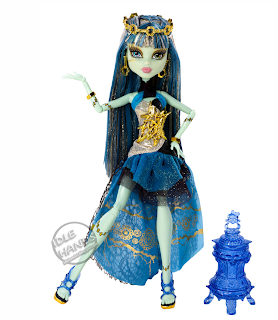 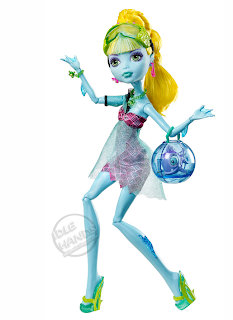 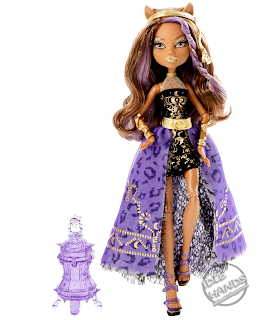 "The Caped Crusader meets his match! From the original comics to the campy live action TV shows of the 1960s, in blockbuster movies and multiple animated series, the purr-fectly beguiling Catwoman toys with Batman while planning fantastic jewel heists with acrobatic skills and a seductive style. Ken and Barbie take on the roles of these famous DC Comics characters, with re-creations of two iconic costumes."

The Wizard of Oz Collection Designed by Linda Kyaw

"This doll is sculpted in vinyl in the likeness of Judy Garland, the actress who portrayed Dorothy." 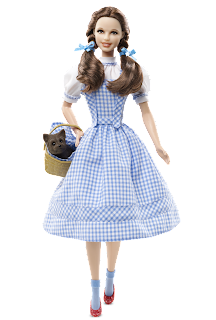 "This doll is sculpted in vinyl in the likeness of Billie Burke, the actress who portrayed Glinda."

"This doll is sculpted in vinyl in the likeness of Margaret Hamilton, the actress who portrayed the Wicked Witch." 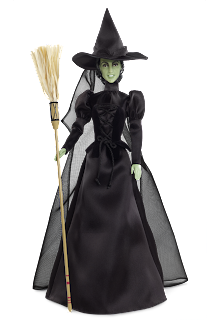