I almost got away with not ordering this gorgeous doll because I forgot to put it in my calendar. Then I went on Facebook late in the day and there she was in all her glory.

I love this doll. Superdoll is killing it! I love everything about her from her fascinator to her wig to the makeup and all the way down. The colors are absolutely stunning.
I hope those bangles open up and I'm dying to see her "uncomfortable stilletto-heeled" court shoes.


Venus is fabulous as could be in her strelitzia Extravaganza, a late night rendezvous calls for coiffure, blossoms and very high heels.
She probably not paying attention to anyone other than herself this evening!
From the top. A gorgeous headpiece of banana yellow guipure asymmetrically sprouts from her flaming blunt red banged wig. A statement just as we get started ...fabulous!
Her eyeshadows in the spectrum of shocking green and smoke surround her eyes of translucent pistachio and blind fern with lids of unripened vanilla. Lips of fluorescent coral Macaw and beyond.
Her 1 piece frock; an ode and a nod; in electric blue sinuous silk satin custom printed with deconstructed strelitzia embellished in laser organza petals and piece d' resistance..... a beaded Massaii corset finished with a flourish of jungle bouquet. Probably not something you would wear for pre rendezvous cocktails.. unless you were a D'Royce; of course.
Venus loves twilight and loves nothing more than oozing around in skin tight satin as the moon comes out.
Always accessorised to the twenty sevens, Venus has a discreet electric blue clutch trimmed in stuff that matches her corset, opera length gloves in almost not there yellow illusion tulle, and totally uncomfortable stiletto heeled courts in magical 'just the right' blue.
Huge inspired gilt bracelets are her final accessory!
Venus knows once the beats start beating she's gonna shimmy all night long.
Could someone please hand her, her sunglasses? 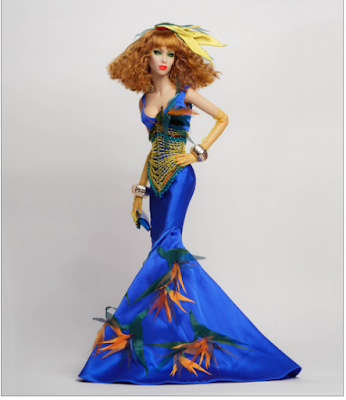 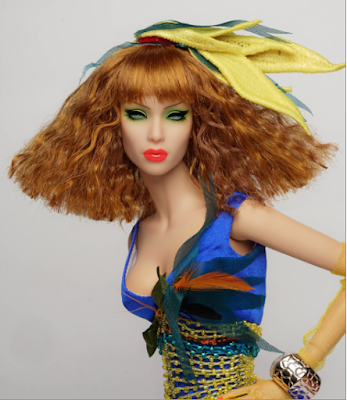 Email ThisBlogThis!Share to TwitterShare to FacebookShare to Pinterest
Tonner has announced his newest DC Comics character, Wonder Woman #1. Why the #1?  There have been several Wonder Woman dolls from the TDC. Maybe this is the first Gal Gadot sculpted likeness. in a forthcoming series.
The costume looks great but I like to see Tonner's dolls in person before making a decision.  I hope the finished product is prettier. I like the stand as opposed to the usual awkward saddle type. This is much more attractive. I hope it's heavy enough to support her.
I wonder what is  so "totally different" about this body besides the fact that she comes with several different types of hands. 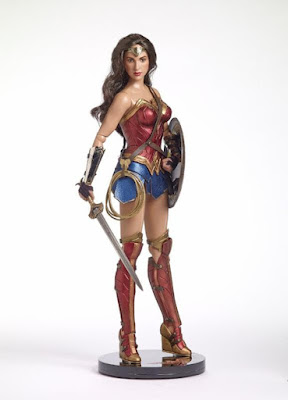 This is the company's description:

The warrior Princess from Themyscira takes form as a 16" character figure of expertly engineered injected plastic and vinyl.  The totally new body has 15 points of articulation and Gal Gadot's likeness is captured in exquisite detail.  The finest saran is used to create lifelike hair set off with an accurate, highly detailed crown.

Battle armor is a must for Wonder Woman and the extreme detail of this set is made for a Goddess.  Accurately sculpted depicting her movie costume, the WW armor consists of a molded breast plate with a genuine leather battle skirt; her armband and gauntlets are made of real metal.

Wonder Woman carries her golden lasso in a genuine leather harness.   Boots are made of detailed vinyl and resin.  Figure comes with changeable open hands, fists and gripping hands. 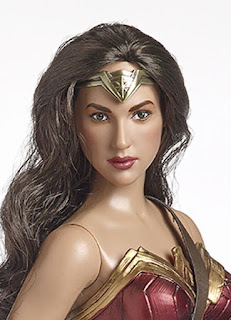 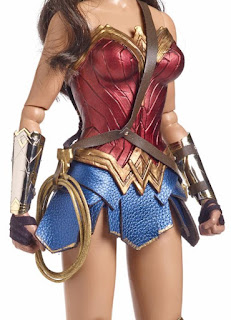 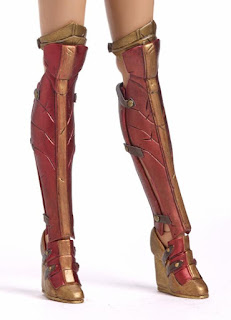