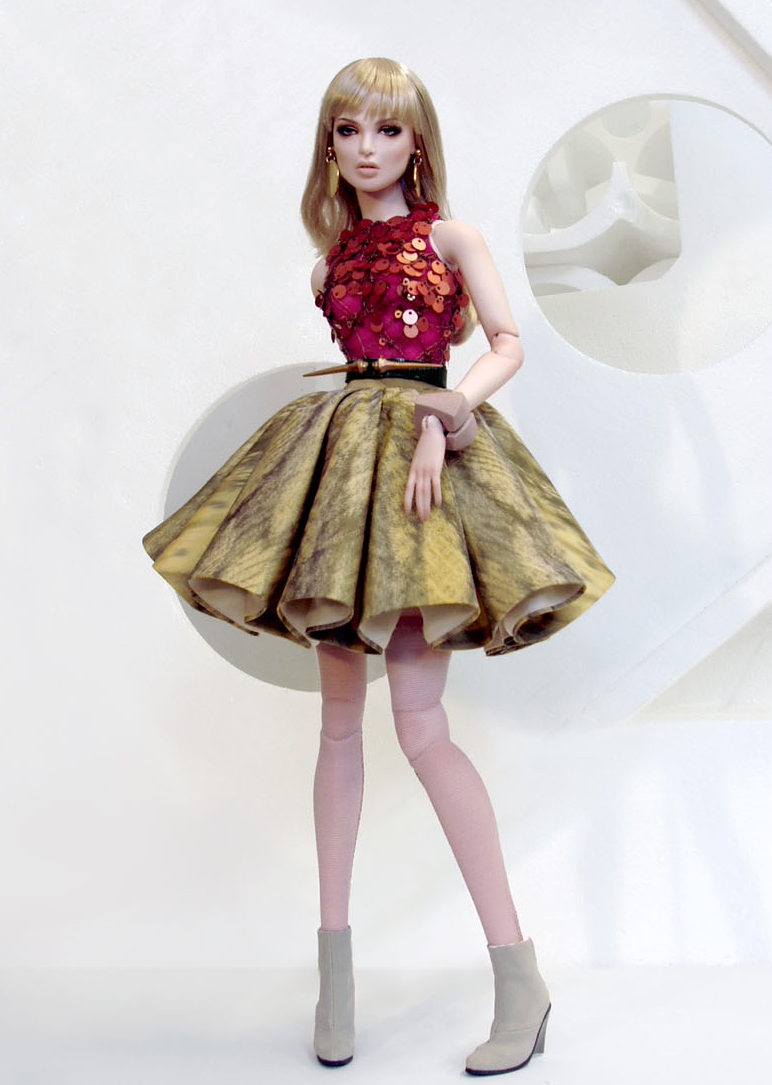 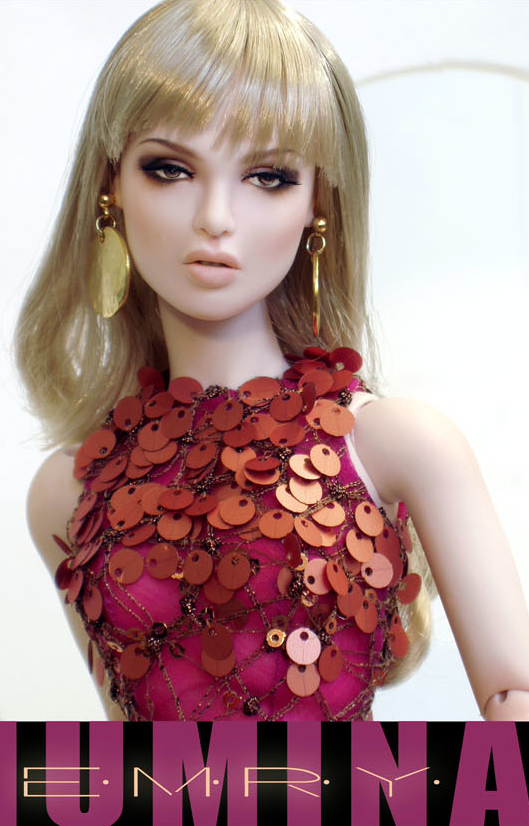 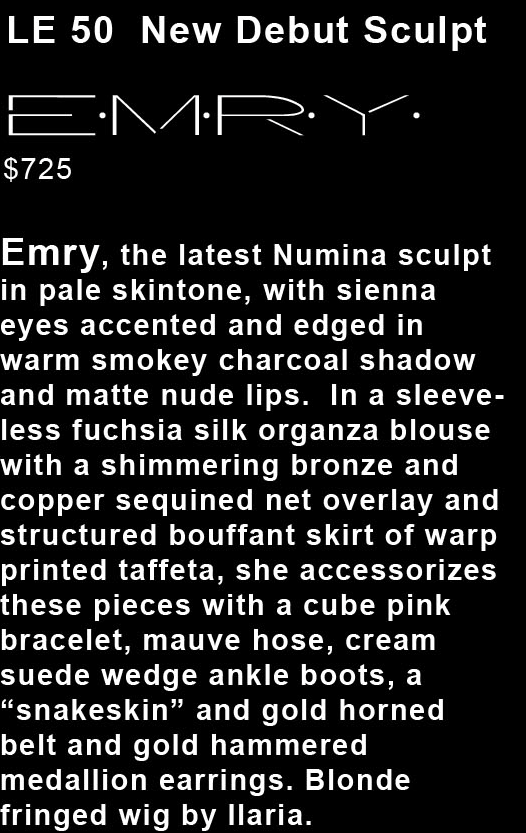 Emry will be available for pre-order at www.dollcis.com on Saturday, November 29 at 12 Noon EST.
A 50% deposit plus shipping is due upon pre-ordering. Doll will be ready to ship in March of 2015.

My convention collection has arrived after a nearly 3 week wait. If I ever do this again, I will pay the extra $ to have it picked up at the event and shipped from there. I wonder why, when these collections were ordered and paid for way in advance, they weren't ready to ship immediately upon the end of the event. We are the collectors who bought these dolls blindly trusting that we'd like them. Why should we have to wait so long to get them? Don't give me the overused excuse that Integrity is a small company. They hosted a convention for 500 people and that excuse is still being thrown out to pacify collectors? 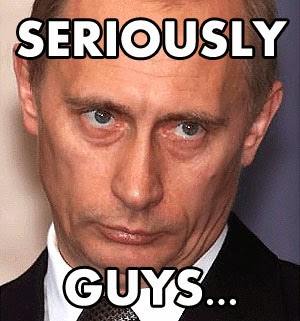 There is only one doll from the entire 7-doll convention collection that I'm keeping and that is Natalia. My decision was based on the fact that she is very beautiful, I like the skin tone and I have only one other Natalia at this time.
I don't care for her fashion - it's cheap-looking like most of the other fashions from the event. The fabric is chintzy and the style is just not something that suits me. The cape is attached at the shoulders. In order to get the gown off it has to go over her head. 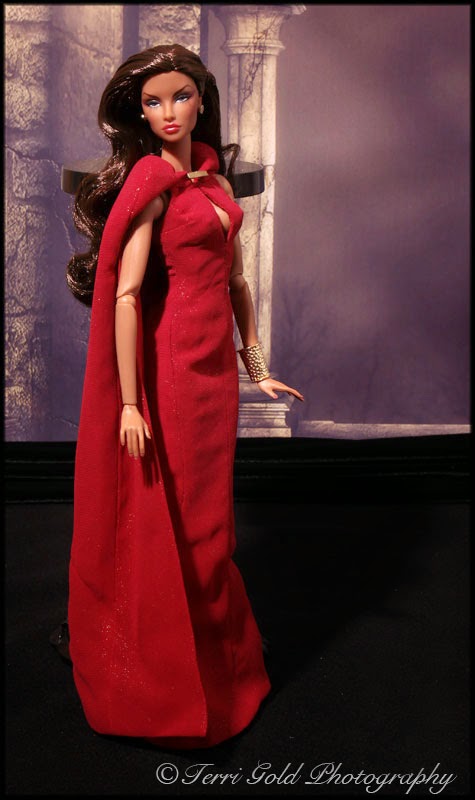 I had a hard time deciding whether or not I should keep Eugenia. But I already have several other gorgeous Eugenias and if she sells, all the better.  She, too, is a beauty but in less than stellar gown.

The minute I saw the Vanessa, I knew she was not going to join my tribe. I really dislike Vanessa 2.0 and this one's makeup is very harsh. She has a wild look in her eyes. 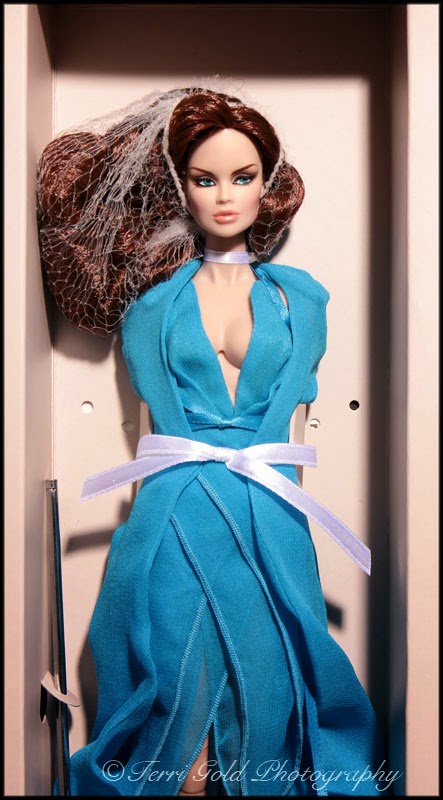 If I loved Poppy Parker, Dark Moon would stay. She has a very pretty face. Again, I'm not a fan of the outfit but it is Poppy-Era appropriate. 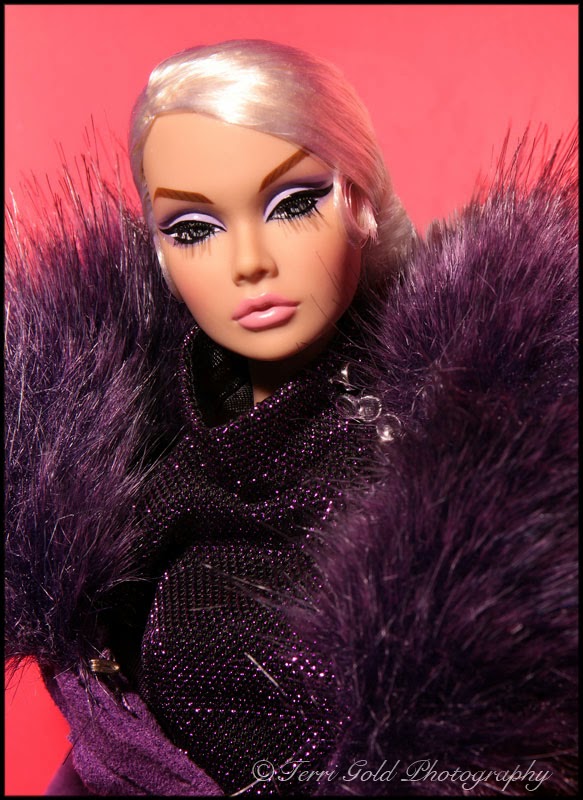 I don't know why this doll is not selling well. My theory is that there are just too many dolls altogether and collectors' funds are being spread thin. The more dolls offered at a convention,  the more money the manufacturer takes in.  The less dolls there are, the higher the value goes on the secondary market. It seems the market has reached it's saturation point.

However, in the case of the Agnes convention souvenir and the Elise centerpiece, the secondary market went way up. No surprise there. So many collectors are crazy about Agnes and she will always be an event exclusive...until they change their minds.

My least favorite of all 7 dolls was Veronique "Nocturnal Glow." There is no glow in this sculpt at all. Poor Vero. They took away the face that launched a line. She looks sad and wistful now. Again, the fabric used for the gown was a cheap-looking black with a metallic gold thread and no discernible style. That humongous bow has to go. 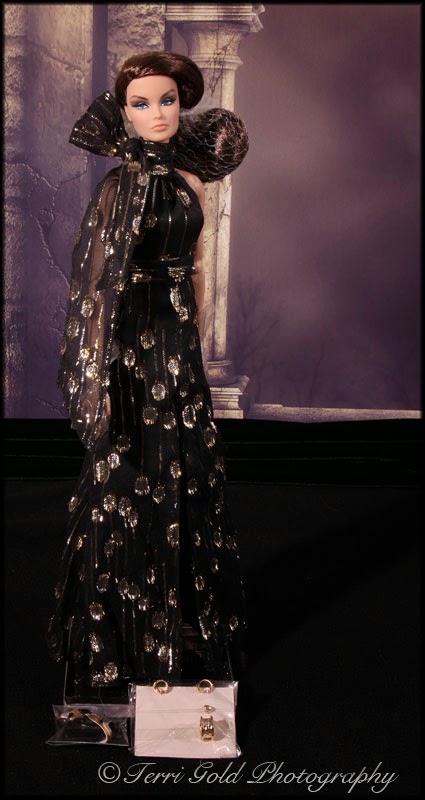 If I weren't keeping Ayumi, I'd consider adding Kyori "Nightshade" to my collection. 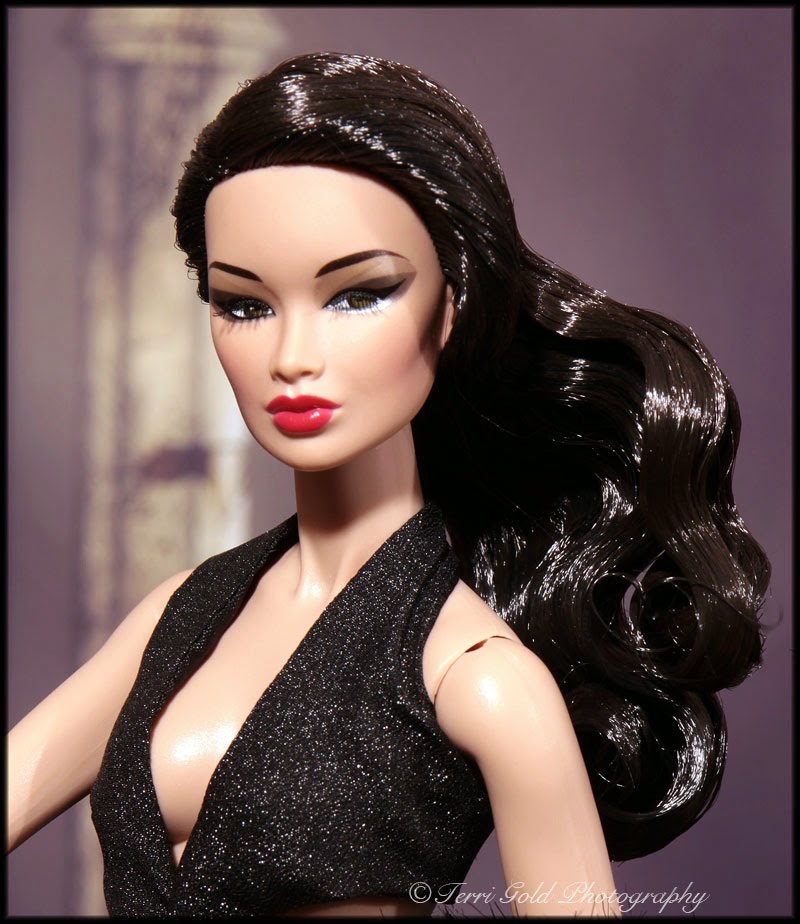 I've noticed something strange about these new bodies - besides the fact that they are like pop-it beads, 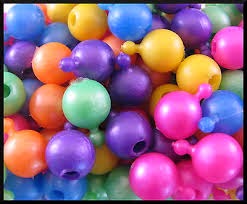 some of the elbow joints make noise when moved. The elbows are stiff even when warmed.

Simonetta Bertorelli "La Ville Lumiere" is a new addition to the Victoire Roux line. She's OK but is not for me. 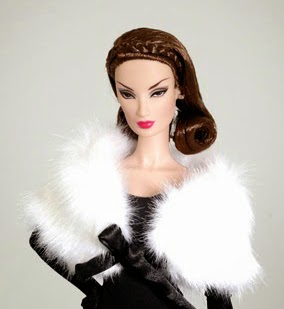 My own picture was not available at the time of posting.

The theme, "Gloss," was partly interpreted by the designers by using sparkly and or filmy fabrics in most cases. The fabrics chosen were not good quality and it showed. However, Agnes' gown was stunning and obviously showed a design flair and quality that would have been nice on all the dolls. The hairstyles were long and glamorous and that worked very well.
Posted by Terri Gold at 11/24/2014 12:18:00 AM 12 comments: Links to this post