The Kingdom Doll Convention was held this past weekend at a beautiful hotel in the Warehouse Arts District of New Orleans. My roommate, Juli Reidl, and I went out on two pre-reserved tours. One was a visit to the Mardi Gras Warehouse which was incredible and the other was a culinary tasting tour in the French Quarter. We also made sure to eat beignets at the Cafe du Monde.

I'd go back to NOLA just for that alone. OMG. I could get addicted to those and the frozen coffee I had to go with them. Delicious!

On Friday evening, the event began.

We were treated to this amazing diorama at the cocktail party. Helen, on the right is wearing "Sloth," the second event outfit. Duchess (not a convention doll) is wearing and surrounded by items from "Lazy Poodles," an optional fashion/accessory set. The diorama wardrobe created by http://filmideco.com/ and the upholstered furniture was created by Julia Gartung.
The handmade felted poodles were the creation of Nancy Arnold of the House of Raifere. 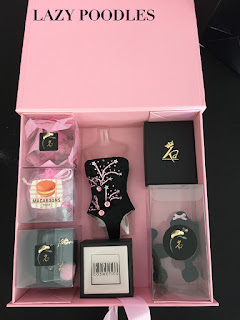 I've been home for nearly one week and I'm still digesting the wonderful experience of the Kingdom Doll Convention.  Many photos of my city experience have already been posted on Facebook. This post will cover the dolls I took home, the event OOAK, the Limited Edition twins, the auction doll and a bit more.

I pre-ordered the companion doll, Helen, and was able to take her back to my room on Friday evening. Helen features the Carvetii head sculpt. What a beauty she is. 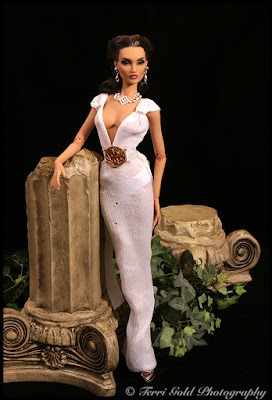 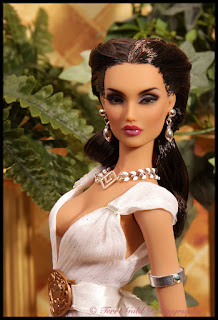 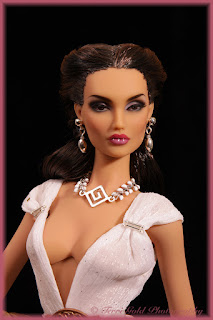 At the cocktail party on Friday evening we viewed the OOAK Auction Doll who ultimately went for  $15,750. Her name is Hera. The dolls were displayed in acrylic cases and better photos were not an option. I'm sure the winner will produce beautiful photos. 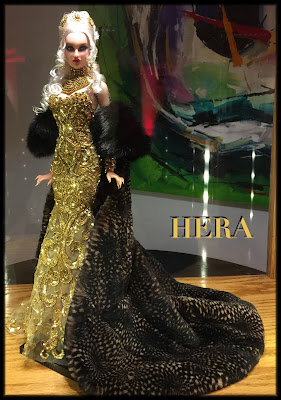 The first convention outfit was Lust. I photographed it on Chaucer. The black poodle shoes were not part of the ensemble. They came with the pink negligee. Lust came with other beautiful shoes. 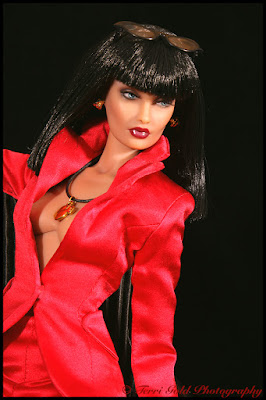 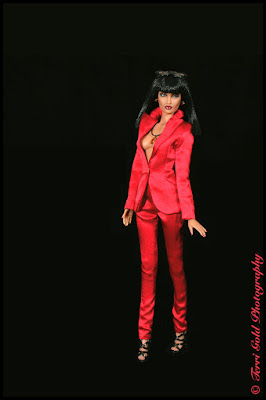 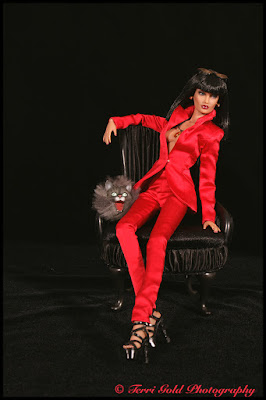 Two lucky collectors got golden apples, (the rest of us got red apples,) and won the opportunity to purchase one of an edition of two Aphrodites.

Helen and Paris, an LE15 Kinsman, were displayed together. 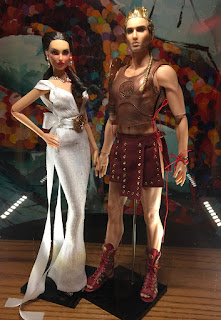 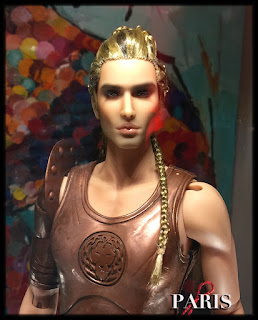 At brunch on Saturday we received several table gifts including Sloth. I photographed the outfit on Draig. 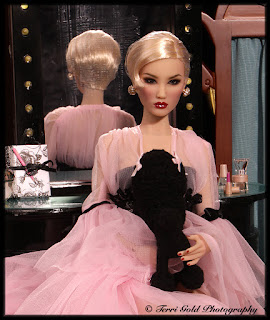 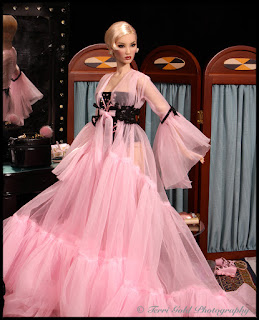 Travel dolls were displayed and we voted for our favorites in three categories. Steven Prokop swept two categories with his creative entries and Monique Kordasiewicz won the third.
I believe their prizes were pink versions of the Bumble Bee outfit from a few months ago.

There was a quiz called Pride which tested attendees knowledge of all things Kingdom Doll. I didn't even submit an entry. (Don't ask.) Patrick Paul Gerhardt won a OOAK doll with Dauphine's sculpt. 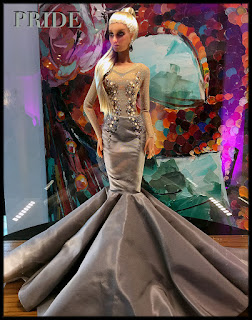 On Saturday at the Gala Dinner we received Avarice, the event doll. She features a new head sculpt called Belgae. 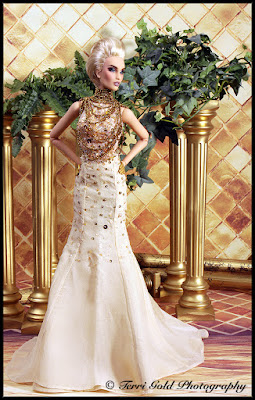 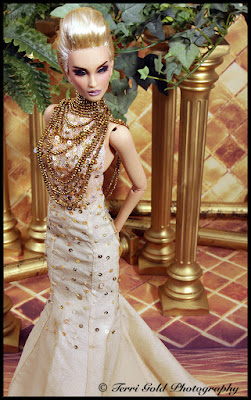 The centerpiece on each of 6 tables was Envy. I am more than a little grateful that my roommate, whose name was one of those chosen, allowed me to purchase her.  Envy uses the Demetae sculpt. Her fashion and shoes have many Swarovski crystals which were hand applied by Alexandra herself. She came with a set of pink gloved hands, dragon lady nail hands and her standard hands. She is truly unique amongst prior Kingdom Dolls with her showgirl costume and her darker shade of resin which has not been used on this sculpt previously. 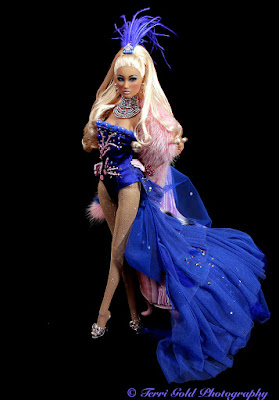 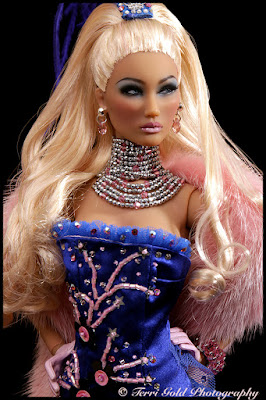 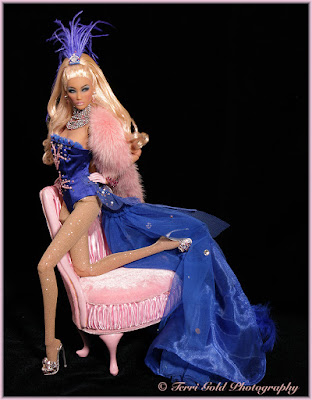 My table mates and other attendees were very generous with their table gifts. When I got to my table in the dining room, I couldn't make out the table or chairs as they were covered in boxes and packages! I'm not kidding. Back at the room, I had to leave behind my souvenir hurricane glasses from the cocktail party as I had no room at all in my carry-on or suitcase. I'm sad not to have them now.

Several of us traveling northeast left the hotel at the break of dawn. We had a little gathering at the airport. That was a special way to end a beautiful weekend.

I arrived to Philadelphia in rainy, bleak weather but I felt great as soon as I got out of the airport.  Once home I unpacked but didn't open my treasures because I went to sleep. Heavenly.
It was a joy meeting those "Sinners" I had been chatting with all year. After knowing him for so many years, I finally met Jose´ Luis Vasquez from Puerto Rico. Hola, Jose´.

Alexandra Forbes and Amanda Arnold along with their team of elves did a wonderful job creating and organizing this convention.

PS: I won't be able to answer questions about next year's event as the information hasn't been released as of this writing. There will be a general release soon.
Posted by Terri Gold at 11/04/2017 12:08:00 PM 8 comments: