Just when I thought the Tonner creatives couldn't get crazier (in a good way) they come out with this San Diego Comic Con 2012 exclusive, Rico the Zombie Boy. 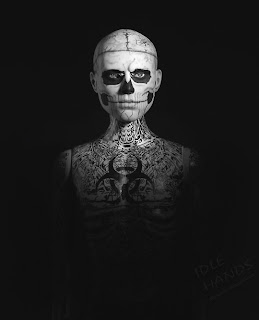 The following coverage was blogged by Paul Nomad at Idle Hands.


Featured in Lady Gaga's Born This Way music video, model and performer Rick Genest (Zombie Boy) is a human canvas, with 80% of his body covered in tattoos. Genest's body art depicts the human form as it decomposes into a corpse, flesh-eating insects and all. His special art display has earned him two admissions into the Guinness book of World Records: one for the most bones tattooed on the body (134), and one for the most insects tattooed on the body (176).


"My tattoos symbolize life through death, or death through life," Genest said in a "Meet Zombie Boy" article featured on Dermablend®'s website, where he is a brand ambassador. "They've been a part of me forever - before I even got them done. They reveal how I feel on the inside. I'm so used to how I look now that I don't see them anymore."


Discovered by Lady Gaga's personal stylist and Creative Director of fashion powerhouse Thierry Mugler Nicola Formichetti, Genest first appeared on the fashion scene when he was featured by Mugler in the Paris fashion show in January 2011. In addition to walking runways for Mugler and other designers in Milan, Berlin, Copenhagen, Warsaw, Rio, New York and Toronto, Genest has become the face of Dermablend in its award winning Go beyond The Cover video which attracted more than 15 Million views and 650,000 likes on its Facebook. In the process he has become a social media phenomenon, with more than 66,000 Twitter fans and 66,000 Likes on Facebook. Visit his website at http://.RickGenest.com, http://www.facebook.com/ricothezombie and http://twitter.com/ricothezombie.


"When I first saw Rick in a magazine, I was instantly fascinated," said Robert Tonner, CEO and celebrated doll artist and designer. "There was something so visually arresting about his super edgy look juxtaposed with sophisticated, tailored clothes."


The Zombie Boy Character Figure™ will be 17" tall, and boasts hand-painted details and will feature a replica of Genest's intricate body art, and also include his facial piercing between his eyes. With Tonner's multiple points of articulation for dynamic poses and quality craftsmanship, this Zombie Boy Character Figure™ pulls out all the stops. Check out the sneak peek above!


"This was one of the most challenging and fun projects I've worked on in a long time," said Tonner. "We are really excited that Rick is going to be joining us at Comic Con, it's going to be a real treat to have such a special guest in our booth."


You can get the Zombie Boy Character Figure™ at the 2012 SDCC in Tonner's booth (#4149), as well as on their website, www.tonnerdoll.com (Mid July). He is a limited edition size of just 500 pieces.


Tonner states that this will be their ONLY SDCC 2012 exclusive, but they will be selling their own convention exclusives and some other special bits (along with a teased collaboration with FAO Schwarz) for the die hard fans! For more information, or to see the vast collection of comic book heroes and more Tonner has to offer, visit www.tonnerdoll.com. 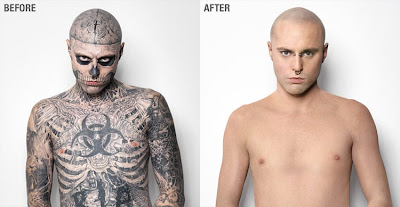 Dermablend commissioned Rick Genest to do an ad campaign for their body and leg cover makeup.
Watch this very cool and interesting video.
http://www.youtube.com/watch?v=iLpbMqQMelk&feature=colike