Collectors who will be attending Tyler's 10th Anniversary Event on November 7th have been offered the opportunity to purchase an ultra-limited (100) edition of a Tyler Wentworth Signature Style Blonde doll. This is being described as a fresh take on a classic which it surely is. This re-imagined version's blouse is a white taffeta bodysuit with rhinestone buttons. The skirt is black sequin and mesh with a rhinestone buckled satin belt. The shoes are t-strap and she is sporting her ubiquitous rhinestone studs. Her hair is also in a signature style but with a braid around the ponytail.
I think the price of $149. is twice as high as it should be and that is why I am hesitating to order her. On top of that I would have to pay 8% sales tax because I live in NY. She will not be coming home with me.
It might have been significant if TDC had issued these dolls at the same price the originals were - $79.99. I would have ordered two of them immediately. 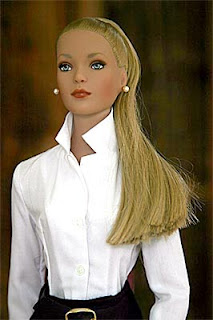 If I remember correctly, I paid $25. for my first Signature Style Tyler at a trunk show in Hurley. I loved that doll and photographed her endlessly. She, too, wore a white blouse, black skirt, black hosiery and shoes.
Here are the versions of the Signature Style dolls that have been issued. Each edition was produced in brunette, red and blonde versions. All these images were borrowed from the Tyler Wentworth Archive except the second picture from the top which is the actual picture of my first Tyler doll.

2003 Signature Style - AR Red, Blonde, Brunette $79.99
(The blonde was redressed for this picture but originally came dressed as the others.

2004 Signature Style - BW - Brunette shown.
Also available as a blonde and redhead. All had blue forward-glancing eyes.
These were the first bending wrist Tyler dolls. Retail $79.99
I loved these BW dolls so much that I bought three of each!
Posted by Terri Gold at 10/21/2009 11:55:00 AM