I previously commented on the fashion that PG Natalia is shown dressed in and how poorly the draping appears. While it is certainly possible that the photographer could have rearranged the folds to look better, I have the feeling that it just doesn't work as a high fashion gown anyway.
I looked back to see other ballgowns in the Fashion Royalty line and came up with the Pale Fire Vanessa doll.
On several levels the PG Natalia pales in comparison - no pun intended. Pale Fire was part of the 2007 Cult Couture line available from FR dealers. She was an edition of 1000 and was the most expensive doll of the five issued at $159.00. The bodice of the gown had a corset-like construction and the skirt was crafted from a high quality, moderate sheen fabric. There are actually two skirts with the top layer lined in the same color as the full bottom skirt. The drapes and folds were voluminous and did not need to be arranged to look right. Her jewelry is still sought after by collectors. It was an intricate collection of woven beads with hair ornaments, neckpiece, earrings and bracelet. Collectors had been clamoring for more jewelry and this was the answer. The entire line that year had excellent jewelry, beautifully crafted fashions with terrific handbags and shoes. There was no fried, frizzy hair either. It was to be the last superbly dressed and coiffed Vanessa - not counting the convention dolls which were to follow. There have been eleven Vanessas since then and not one regular line issue has been anywhere near Pale Fire. 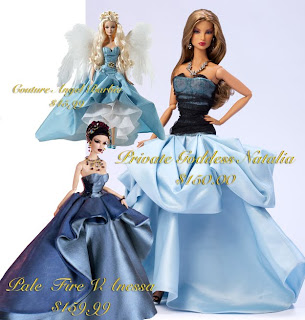 I put stars next to the dolls that appear to have been designed and constructed on a higher fashion level. Metal Maven and the other basics are just that - basics. One doesn't expect that much in terms of fashion.
I focus so much on Vanessa because she has been my muse. Once I couldn't wait to see the next Vanessa. Now I tremble in fearful anticipation. But I have gone off the subject of this post.
I'm not pleased with the direction of the premium dolls. I do not think that the Monogram dolls can ever take the place of Fashion Royalty although that is apparently where they are going. All the talent (Jason's ?) goes into designing their clothes. But then what about the Monogram Brilliance outfit? I think that if the construction error on the front of the jacket hadn't happened.....

I can understand that Jason's interests lie elsewhere and I applaud his success. But he was the design talent of Integrity and Fashion Royalty. Now what?
Posted by Terri Gold at 3/21/2010 01:52:00 PM