Why do I even try? Again and again I am reminded that Mattel's products are inferior yet they look so cute in the pictures. Now I know why so many Barbie collectors keep everything in the boxes. Once you take it out, the stuff looks like crap. 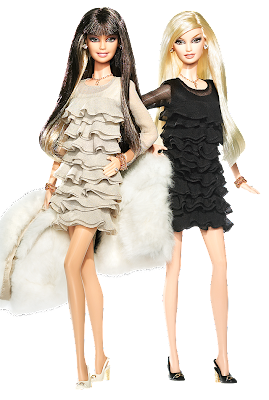 This episode of "Nightmare on Mattel Street" stars the Juicy Couture Beverly Hills G&P Barbie doll set.
The dolls are tiny replicas of Pamela Skaist-Levy and Gela Nash-Taylor, the designers and co-founders of the Juicy Couture fashion empire. List price is $110. I used one of my coupons and got free shipping so I thought I did OK because it was less expensive than I could find anywhere else. I wanted the dresses for my Fashion Royalty or Model Behavior dolls. I knew in advance that they were sewn on.
I pre-ordered and approximately 2 months later a crushed UPS box arrives. I am not exaggerating when I say that every single side - that's 6 sides - was bashed and/or punctured to a degree. The box actually looked as if it had been put in a compressor. The tape had begun to pop and the contents were visible!

There was no protective padding around the doll box and so it echoed the damage.

Upon writing to customer service I received a RA from Mattel with a return shipping label. Then several weeks went by and I didn't get my new dolls. I wrote to Mattel and as if they had been waiting for my letter, I was told that they received my return and would ship out the new dolls to me.
The new set arrived in a pristine box and it still looked really pretty.

The first doll I undressed was the blonde. There was cello-wrap around her body to keep the black dress from contacting the vinyl. Unfortunately they didn't wrap her arms and they are seriously stained. I was going to sell the dolls but instead she has Oxy 10 all over her arms right now. Her hair has so much product on it that it looks like chunky straw. The brunette, who is much prettier, had no staining at all. 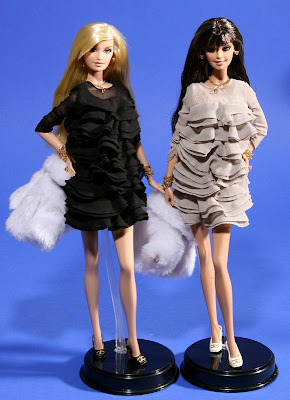 One improvement to note is that all the jewelry was removable and replaceable. The rings and earrings popped right out. The bracelets had hook fasteners as did the necklaces. The shoes are very cute. The packaging is very attractive and the set comes with a miniature perfume bottle. As usual, one needs a hacksaw to get the dolls out of the packaging. I'd love to watch the assembly of these items for sale.

I do not recommend this set unless you intend to keep the dolls in the box.